Special Inspector General for TARP (aka "SIG TARP") Neil Barofsky said something we've all known for a while: the AIG failed.

If you recall, AIG's failure meant that the companies on the other side of all of its contracts (counterparties) were going to be left holding the bag. Under normal cases of bankruptcy, the court would impose haircuts to the amount of money due to counterparties, but because AIG didn't actually declare bankruptcy, the counterparties claimed that they were owed 100 cents of every dollar. The only bank that even considered taking a haircut was UBS - the Swiss, for goodness sakes - hard to imagine that a Swiss bank could make US banks look bad, but here's a case in point.

OK, so let's get this straight: the financial world is melting down, Uncle Sam had just saved the bankers' butts and now Tim Geithner the President of the Federal Reserve Bank of New York (FRBNY) was going to wimp-out? Yes, the Great Gazoo strikes again! (My friend pointed out that our current Treasury Secretary and former tax cheatbears a striking resemblance to this esoteric character from "The Flintstones" — Geithner has been the Great Gazoo since!) 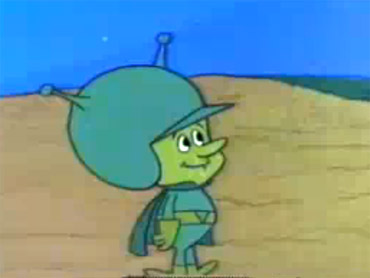 (You Tube)
When Geithner/Gazoo says, "Hello Dumb Dumb," he's talking to us! The Great Gazoo shafted the US taxpayer in the AIG debacle and in the process, enriched the counterparties who dragged us into this mess. The SIG TARP reportnoted that "structure and effect of the FRBNY's assistance to AIG ... effectively transferred tens of billions of dollars of cash from the government to AIG's counterparties."

Oh, and remember all of those claims by Goldman Sachs brass that the firm had "perfectly hedged" its exposure to AIG? Not so fast, boys. According to the New York Times, "among its notable findings, the report challenged Goldman's position that it should not have been forced to bear losses on its dealings with A.I.G. because it had successfully hedged away any exposure. Mr. Barofsky said that Goldman's hedges were unlikely to have held up amid the market turbulence of late last year."

Barofsky seems to be one of the few officials that has to tell us what we already know: TARP is "almost certainly going to be a loss" for taxpayers and Geithner rolled over for Wall Street in the AIG negotiations.

More on MoneyWatch:
•Double Foreclosures for Nicolas Cage
•4 Quick Ways to Boost Investing Returns
•Should You Get Your Health Care at the Drugstore?
•8 Lessons from Real-Life Job Switchers
•Investing Lessons ... from Strawberries?