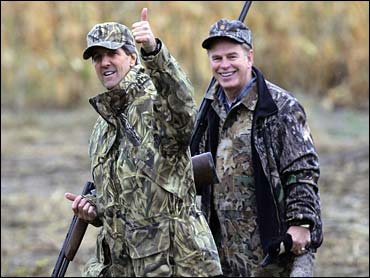 Democratic presidential candidate John Kerry went on a waterfowl hunt to try to win votes in Ohio, while President Bush planned to campaign in nearby Pennsylvania, a state he has often visited as much as his beloved ranch. Both are closely contested states that could decide the November election.

Kerry's duck hunt was part of an effort to win over swing voters who may be open to voting against Mr. Bush but aren't sure they feel any connection with Kerry. He'll also spend some of the time before the Nov. 2 election day hunting, watching baseball and talking about his Catholic faith.

While the Democrat campaigns as an all-American, his political opponents are working to leave voters with a different impression. Mr. Bush tells voters that Kerry is on the "left bank" of society.

The tug-of-war over Kerry's image is a twist on most campaigns in which a sitting president seeks reelection. Usually, those contests are referenda on the incumbent.

The Kerry campaign has tried to keep the focus on Mr. Bush's alleged failures, but the Bush team has succeeded in putting Kerry's supposed indecisiveness and liberalism at center stage.

With time running out before the Nov. 2 election, national polls say the race is very close, with some showing a slight advantage for Mr. Bush.

In the most recent CBS News/New York Times survey, Mr. Bush leads Kerry 47-45 among likely voters, with Ralph Nader taking 2 percent. The latest Washington Post tracking poll has Mr. Bush up 50-47 percent, and a Reuters/Zogby survey has the president with a 46-45 percent advantage. All those polls have the men within the respective margins of error.

Wearing a camouflage jacket and carrying a 12-gauge shotgun, Kerry left on a hunt for ducks and geese just before 7 a.m. on a supporter's farm outside of Youngstown, Ohio. Kerry adviser Mike McCurry said it's important in the final days of the campaign that voters "get a better sense of John Kerry, the guy."

The Massachusetts senator watched his beloved Boston Red Sox win the American League championship Wednesday night after arriving at his hotel room in Boardman, Ohio. "They're the greatest comeback team there is," Kerry told journalists invited in briefly. He declined to say if there were any metaphors for his campaign.

Mr. Bush was making his 40th and 41st trips to Pennsylvania, visiting Downingtown and Hershey on Thursday and Wilkes-Barre on Friday. He'll go to Crawford, Texas on Saturday, his 41st visit to the ranch he has dubbed his "Western White House" since taking office in 2001.

The president slammed his rival for opposing a constitutional amendment to ban gay marriage. Kerry does not support gay marriage but says the matter is for states to decide, and he favors civil unions for same-sex couples.

"We stand for marriage and family, which are the foundations of our society," Mr. Bush said Wednesday in Mason City, Iowa. "We stand for the Second Amendment, which protects every individual American's right to bear arms."

The National Rifle Association said it bought a full-page ad in Thursday's Youngstown newspaper that says Kerry is posing as a sportsman while opposing gun-owners' rights. Kerry has denied NRA claims that he wants to "take away" guns, but he supported the ban on assault-type weapons and requiring background checks at gun shows

The last time Kerry went hunting was October 2003 in Iowa, a state where he was trailing in the Democratic primary but came from behind to win.

Later Thursday, Kerry was to appear with actor Christopher Reeve's widow, Dana, in Columbus, Ohio. Reeve supports Kerry's intention to expand federally funded embryonic stem cell research, which her late husband believed may have brought hope for spinal cord injuries like the one that left him a quadriplegic for the last nine years of his life.

On Wednesday, the candidates accused each other of misjudging the stakes and lacking the leadership to deal with Iraq and terrorism as they campaigned 60 miles apart in Iowa, a state Mr. Bush narrowly lost four years ago.

"The next commander in chief must lead us to victory in this war and you cannot win a war when you don't believe you're fighting one," Mr. Bush said in Mason City, a northern Iowa farming community. "My opponent also misunderstands our battle against insurgents and terrorists in Iraq, calling Iraq a 'a diversion from the war on terrorism.'"

Kerry, campaigning in Waterloo, said Mr. Bush failed to grasp what the United States faces in Iraq, where more than 1,100 U.S. soldiers have been killed. "If President Bush cannot recognize the problems in Iraq, he will not fix them. I do recognize them and I will fix them."