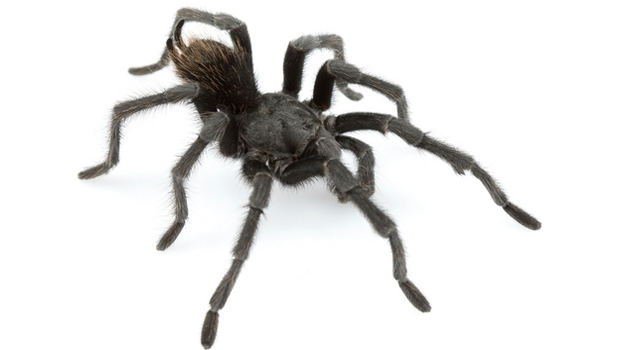 A newly discovered tarantula sports a black coat that is as dark and brooding as its celebrity namesake: the renowned singer Johnny Cash.

Tarantulas, the hairy spiders that stole movie scenes and won hearts in popular films like "Home Alone," "Raiders of the Lost Ark," and "Dr. No," take a starring role in a new study that reorganizes their group, reclassifying the majority of 55 known tarantula species and adding 14 new ones, including the creepy-crawly named for Cash.

The study researchers evaluated close to 3,000 tarantulas from across the American Southwest. Scientists integrated tarantula DNA into the study alongside anatomy, geography and behavior gleaned from spiders that were gathered by the researchers, contributed by "citizen-scientists" and borrowed from museum collections, to deliver the most comprehensive overview of tarantulas ever assembled, according to the new study, published online Feb. 4 in the journal ZooKeys. [Tarantula Photos: Gallery of 'Eight-Legged Teddy Bears']

Even though tarantulas as a group are generally well known and easily recognized by the public from their appearances in popular culture, far less was known to science about their distribution, diversity and how they lived in the wild, according to the study's lead author, Chris Hamilton. Hamilton, an arachnologist and graduate student at Auburn University's Department of Biological Sciences, told Live Science that "not much behavioral or ecological work has been done to understand these species and the settings they live in," he said. So he set out to do something about that.

While tarantulas can vary greatly in size -- from a leg span measuring about 6 inches (15 centimeters) long to tiny individuals able to fit comfortably on the face of a U.S. quarter -- tarantula species generally don't vary much in their anatomical features. For tarantula taxonomists of the past, this posed a frustrating challenge, resulting in classifications that divided tarantulas into many more species than the group required, Hamilton found.

"There was huge murkiness as to what was a species," Hamilton told Live Science.

For more than 10 years, Hamilton and his colleagues gathered and analyzed tarantulas from a range of habitats in the southwestern United States. Brent Hendrixson, study co-author and chairman of the Department of Biology at Millsaps College in Mississippi, set up a Web page that allowed citizen-scientists to send the researchers hundreds of specimens from locations across the U.S., including some where tarantulas had never been collected before, Hamilton said.

Tarantulas stored in museum collections proved to be useful, too. The Auburn University Museum of Natural History (AUMNH) houses a tarantula collection containing more than 2,300 specimens, which played an important part in the study, according to Jason Bond, the study's senior author and AUMNH director. Spanning more than 50 years of collecting, the AUMNH tarantulas provided critical data on variations between tarantula populations and biogeography, "essential elements to understanding how diversity of life on our planet has evolved and become spatially distributed," Bond told Live Science in an email. [Goliath Birdeater: Images of a Colossal Spider]

When the researchers' work was done, the tarantula group that originally contained 55 species had been pared to 15, with the 14 new species bringing the grand total to 29, they reported in the study.

"The Man in Black"

One of the new spider species, Aphonopelma johnnycashi, had a particularly well-known namesake -- famed singer and songwriter Johnny Cash. The spider was abundant near Folsom State Prison in California, which had inspired Cash's song "Folsom Prison Blues" and where he performed and recorded a live album in 1968. And the tarantula's dark coloration reminded Hamilton of Cash's preference for head-to-toe black attire, which had earned Cash the nickname, "The Man in Black."

But with 14 new spiders, the scientists had to come up with a lot more names, and A. johnnycashi was the only oneinspired by a celebrity. "We tried to tie them into something about the species," Hamilton told Live Science.

Some were named in reference to where they were found, like A. saguaro (Saguaro National Park) and A. superstitionense (the Superstition Mountains). Hamilton named A. moellendorfii to commemorate mentor, educator and fellow arachnologist Dave Moellendorf, who introduced Hamilton to tarantula distribution in Texas and supported his early interest in the spider group. And A. xwalxwal (pronounced "hwal-hwal") got its name from the word for "a type of small spider" in the language of Cahuilla Native Americans.

"As a Native American myself -- a member of the Chickasaw Nation of Oklahoma -- I do try to look for ways to tie Native Americans into new species, if possible," Hamilton said.

But finding new species isn't just about scoring naming rights, Hamilton said. "We do it because we love what we do. We really love the organisms, and we want to know what's here on Earth and what their relationships are," he said.

And if naming a new species after a celebrity brings some of that excitement about biodiversity and evolution to a wider audience, then everybody wins.

"It's a really important mechanism for reaching out to the public and getting them involved," Hamilton said. "We want the public to love these new species, too."