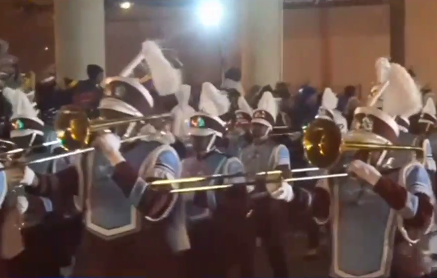 ATLANTA -- The marching band of a historically black college in Alabama will perform in President-elect Donald Trump’s Jan. 20 inaugural parade despite a barrage of criticism, the school’s president announced Thursday.

Talladega College President Billy Hawkins confirmed what the Presidential Inaugural Committee had announced Dec. 30. It was the first official word from the school.

The Inaugural Committee’s announcement last month had ignited passionate debate on the campus and around the nation.

In announcing that the Talladega College Marching Tornadoes will participate, Hawkins said the lessons students can learn from the experience cannot be taught in a classroom.

“We respect and appreciate how our students and alumni feel about our participation in this parade,” Hawkins said in a statement Thursday.

“As many of those who chose to participate in the parade have said, we feel the inauguration of a new president is not a political event but a civil ceremony celebrating the transfer of power,” Hawkins added.

“Shame on #talladegacollege,” one user wrote, echoing other comments critical of the decision.

A petition that now has more than 1,800 supporters was also created on change.org asking that the band withdraw, CBS Atlanta affiliate WGCL reported.

“As an alumnus I respectfully request that Talladega College Band withdraw from any inaugural events for Donald Trump,” wrote a woman identifying herself as Shirley Pratt Ferrill, the creator of the petition. “In view of his behavior and comments I strongly do not want Talladega College to give the appearance of supporting him.”

Others, however, said the chance to perform is a good opportunity.

“For one, it would bring like a positive at least ‘cause people will at least know about the school,” said Joshua Eleby, a Talladega College senior.

Others echoed that sentiment on social media.

Talladega bills itself as Alabama’s oldest private, historically black liberal arts college. It traces its beginnings to 1865, when two former slaves pledged to provide a school for the children of former slaves of the community. The school was founded two years later, in 1867, according to historical accounts on its website.

Talladega will join about a half-dozen other college bands, at least eight high school bands and several military groups that have been announced for the parade lineup so far.

The decision to march in Trump’s inaugural parade has also sparked controversy at Marist College in Poughkeepsie, New York. The band will be marching, but some of its members will be staying home, school spokesman Greg Cannon said earlier this week.

“They don’t want to have anything to do with the inauguration or President Trump and we respect that, and that’s their right,” Cannon said.