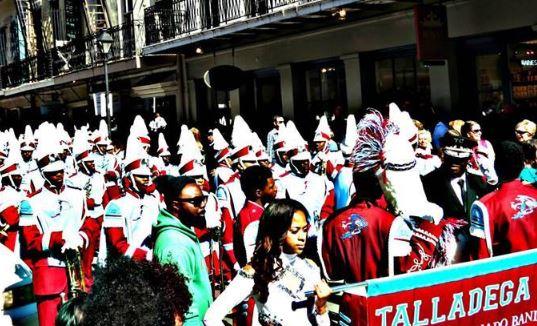 Talladega College’s band will march at Trump’s inauguration as other historically black schools such as Howard University, which performed at President Barack Obama’s first inaugural parade, said they won’t be marching in the Jan. 20 event.

“We were a bit horrified to hear of the invitation,” said Shirley Ferrill of Fairfield, Alabama, a member of Talladega’s Class of 1974.

“I don’t want my alma mater to give the appearance of supporting him,” Ferrill said of Trump on Monday. “Ignore, decline or whatever, but please don’t send our band out in our name to do that.”

The move has lit up Talladega College’s social media sites with a sharp debate about the band’s decision to participate in the parade. Some people voiced strong opposition, while others support the band’s participation.

“After how black people were treated at Trump’s rallies, you’re going to go and shuck and jive down Pennsylvania Avenue? For what?” Seinya SamForay said in an interview. “What they did is a slap in the face to other black universities.”

Many on Twitter also shared their feelings on the matter.

One user called the decision “shameful.”

SamForay, of Chicago, was among dozens of people commenting on the school’s social media sites.

The Presidential Inaugural Committee announced Friday that the Talladega College Marching Tornadoes was among 40 groups, including high school bands and military organizations, scheduled to perform in the parade. Some members of the Marist College band in upstate New York, also scheduled to perform at the inauguration, say they won’t participate, a school spokesman said Monday.

Ron White of Atlanta, a 1997 graduate of another historically black college, Fort Valley State University in Georgia, said he questioned why band members from Talladega “should be playing all these patriotic tunes for someone who has degraded us.”

At the same time, though, White said he respects the office of the president and he hopes that Talladega’s band does well.

“What they should do in my opinion is play that national anthem the best way they’ve ever played it in their life, because you’re basically saluting the country,” White said in an interview.

The nation’s historically black colleges and universities instill in students the idea that “ignored behavior is condoned behavior,” said Reese Walker of Memphis, who marched in the band at Mississippi Valley State University. That’s one reason he doesn’t think Talladega College should participate.

The college was founded in 1867, by the descendants of the slaves who helped to build its first building, according to historical documents on the college’s website.

The decision to march in Trump’s inaugural parade has also sparked controversy at Marist College in Poughkeepsie, New York. The band will be marching, but some of its members will be staying home, school spokesman Greg Cannon said Monday.

“They don’t want to have anything to do with the inauguration or President Trump and we respect that, and that’s their right,” Cannon said.

“We’re not looking to put anybody in a spot that conflicts with their personal beliefs,” he added.

About six to eight Marist band members among more than 100 have said they won’t perform, Cannon said. He said there won’t be any repercussions for those students, and they will still have a place in the band when it returns from Washington, D.C.