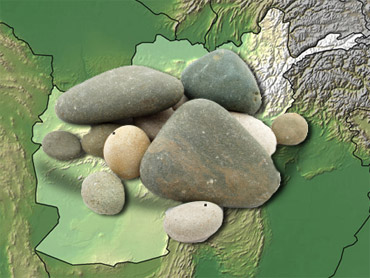 Taliban militants stoned a young couple to death for adultery after they ran away from their families in northern Afghanistan, officials said Monday.

The Taliban-ordered killing comes at a time when international rights groups have raised worries that attempts to negotiate with the Taliban to bring peace to Afghanistan could mean a step backward for human rights in the country. When the Islamist extremists ruled Afghanistan, women were not allowed to leave their houses without a male guardian, and public killings for violations of their harsh interpretation of the Quran were common.

This weekend's stoning appeared to arise from an affair between a married man and a single woman in Kunduz province's Dasht-e-Archi district.

The woman, Sadiqa, was 20 years old and engaged to another man, said the Kunduz provincial police chief, Gen. Abdul Raza Yaqoubi. Her lover, 28-year-old Qayum, left his wife to run away with her, and the two had holed up in a friend's house five days ago, said district government head, Mohammad Ayub Aqyar.

They were discovered by Taliban operatives on Sunday and stoned to death in front a crowd of about 150 men, Aqyar said.

First the woman was brought out and stoned, then the man a half an hour later, Aqyar said. He decried the punishment, which he said was ordered by two local Taliban commanders.

A spokesman for the provincial government also condemned the act.

"It is against all human rights and international conventions," said spokesman Mabubullah Sayedi. "There was no court. It was cruel."

A Taliban spokesman could not immediately be reached for comment.

The ancient practice of death by stoning has been abandoned in all but a handful of countries. It is still a legal punishment in some countries, like Iran, which justify it under Shariah, or Islamic law, although human rights activists say the Quran never specifically prescribed stoning for adultery.

Last month, Iran's religious authorities called off the planned stoning of a woman convicted of cheating on her husband. Sakineh Mohammadi Ashtiani's sentence - which would have been Iran's first stoning since 2008 - was lifted following a campaign by politicians, rights groups, diplomats and celebrities around the world.