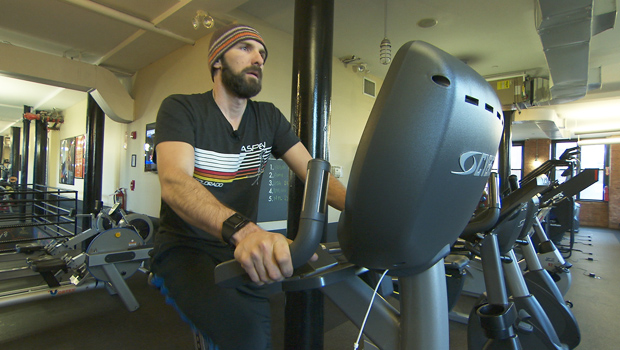 As part of David Pogue's report on smartwatches and the increasing number of wearable gadgets, CBS News spoke to Bob Troia, a follower of the Quantified Self Movement, and a member of the New York chapter. In this extended interview he makes it clear that while some people may find all this measuring unusual or strange, he does not.

Troia, a 41-year-old entrepreneur in digital marketing who lives in Williamsburg, just sold his last business and is looking for the next venture. In the meantime he wears the Basis B1 wrist monitor throughout the day and is collecting passive data 24 hours a day.

Troia also blogs at Quantifiedbob.com, where you can read what he is tracking and his various experiments (including the gambling one at Belmont Race Track quantifying "thrill").

A: For me, it's about wanting to understand myself better. What makes me tick? It's pretty insightful, but whether or not I change my behavior, it gives me information about how I work. When it becomes too much of a chore, people lose interest. Most consumers don't care about all the underlying data. But there's a subset who want to dig deeper in the data.

Q: Could people get carried away?

A: In theory, yes, you could get pretty carried away tracking basically everything, every aspect of your life. The trick is to focus just on -- initially at least -- the things that are important to you. Otherwise, you're going to be overwhelmed with data that you're going to take no action on. It's going to have no value to you.

It's not just about health. Anybody who has ever balanced a checkbook is to some degree quantifying themselves -- they're measuring their finances. The thing is to focus on the things that are most important to you, not to get overwhelmed with the data. Someone who is looking at this from faraway might say: these people are crazy, they're narcissistic, they're whatever. But I think there are a lot of people doing this for their own benefit. It's not about them trying to show and brag and do all that. It's about self-awareness, and the data's there to help them do it.

Q: So what is the Quantified Self Movement?

A: Yeah, that's one of the great things about it being called a movement -- you're finding people that you never knew existed who are very much like you. We're all focusing on the same thing.

A: Finding ways to track, understand, analyze and optimize every aspect of our lives.

Q: Who goes to the meetings?

A: We're very normal people. You'd be surprised! It's not about seeing who can wear the most gadgets and be the most quantified person in the world. A lot of us are sharing techniques and experiences and trying to help each other on their quest for self-enlightenment, or understanding themselves better.

For the past seven months Troia has been taking a glucose reading of his blood every morning. He's also tracking his environment in the apartment: Temperature, humidity, volatile organic compounds in the air, carbon monoxide, nitrogen dioxide.

He's also monitoring his productivity throughout the day -- actually working vs. goofing off on social media. Also, his heart rate variability, blood pressure, weight, cognitive function, reaction time and memory, stress monitoring, posture, meals, exercise, location (where he is during the day), and every now and then he looks at his own DNA.

He says he wants to understand all the components that constitute him, and what is going to help him become a better person.

"You track all those issues, and you're like, 'Wow!' I thought I felt great, and then you realize that you've sort of been going through life for a while with the parking brake on," Troia said. "And when you start fixing all of those areas, you're like, 'Wow! I didn't realize.' It wasn't that I felt bad, I just didn't realize I could, I should be feeling better."