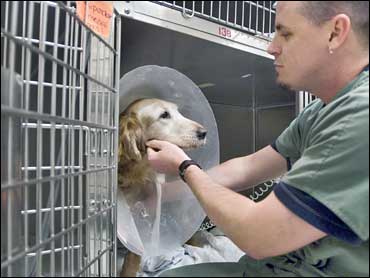 A company that made contaminated pet food that killed dozens of dogs nationwide will pay $3.1 million in a settlement with pet owners, an attorney said Friday.

The pet food, which contained a mold called aflatoxin, was produced at Diamond Pet Foods' plant in South Carolina. The company will set up a fund to reimburse pet owners for the loss of their dog, veterinarian bills and the cost of any unreturned contaminated food, said attorney Jim Andrews, who represented a Knoxville, Tenn., family that sued the company.

Diamond Pet Foods, based in Meta, Mo., acknowledged that workers at its Gaston, S.C., plant failed to follow internal testing procedures to ensure its products were safe. The company made the acknowledgment after the Food and Drug Administration released a report showing the company has no record of test results for 12 shipments of corn in 2005, when grain tainted with the deadly fungus slipped into the plant.

Aflatoxin, a naturally occurring chemical that comes from a fungus sometimes found on corn and in other crops, can cause severe liver damage.

The contaminated pet food was sold in 23 states. Diamond recalled about 20 varieties of dog and cat food when a New York veterinarian said in December 2005 that she had linked a dog's death to the company's food. An estimated 350,000 bags of dog food were recalled, according to the settlement.

The company contends it did nothing illegal, according to the settlement. Mark Schell, Diamond's assistant general manager, did not immediately return a telephone message.

An attorney for the company said Diamond would cooperate with claimants.

"Diamond's taken care of its customers since the very first day that they found out about this, and I think the settlement that we've entered into continues to do that," said lawyer Jeffrey Thompson, reached at his Knoxville, Tenn., office.

Both attorneys said Friday they did not know how many people were expected to file claims against the company. According to the settlement agreement (which can be accessed by clicking here), Diamond and its insurance company have already settled about 1,200 claims related to the class action suit for compensation ranging from the price of recalled food to veterinary bills and pet deaths.

The settlement states that owners of a dog that died as a result of eating the contaminated food could receive up to $1,000. Owners could also be compensated up to $1,000 for testing and treatment for aflatoxin poisoning, as well as payment for up to two bags of pet food.

Andrews and other attorneys representing the claimants will receive a fee of $465,000, which will be paid out from the $3.1 million, according to the settlement.

The 2005 recall is unrelated to the contamination problem that prompted recalls of more than 100 pet-food brands in early 2006. In that case, investigators traced pet deaths to a toxic chemical, melamine, that had been added during manufacturing in China.
By Meg Kinnard