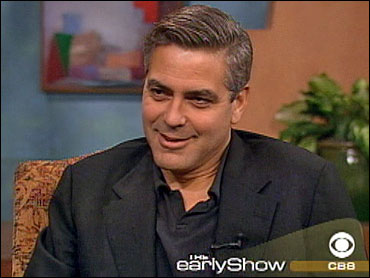 George Clooney says his new drama, "Syriana," could prove to be an example of Hollywood at its consciousness-raising best.

"The truth is, we've been sort of dormant," he

tells
The Early Show co-anchor Harry Smith. "Hollywood usually reflects society. Politically, socially, we haven't been all that awake until the last four or five years. And films take about two or three years to catch up. We're not first responders. … Hollywood is never very good when we try to answer the questions. But we can be very good when we raise the subject."

And that's exactly what "Syriana" may do, Clooney says.

It has many interconnected story lines stemming from what "Syriana" director-writer Stephen Gaghan says is the West's addiction to cheap foreign oil. The film is based loosely on "See No Evil," a memoir written by former CIA agent Robert Baer.

Clooney plays Bob Barnes, a veteran CIA operative working out of the Middle East who suddenly gets fired.

The underlying role of oil as the source of many world issues is "certainly a discussion worth having," Clooney tells Smith. "It's worth talking about the issues. … At some point, we're going to have to address some of our involvement in all of this."

Clooney points to the complicated nature of "Syriana" with pride: "I think that's good. The films that I grew up loving in the '60s and '70s were born out of social and political issues like the civil rights movement and Vietnam and Watergate. You couldn't describe them in one sentence, either. I think that's important."

He admits he could easily accept silly, lighter roles in movies but, "You're investing a lot more in" the more serious roles.

"Syriana" is bring him raves, as well.

Rolling Stone magazine called it his best acting ever, and Clooney modestly kidded Smith that that's because he's "kept the bar so low" in his previous performances.