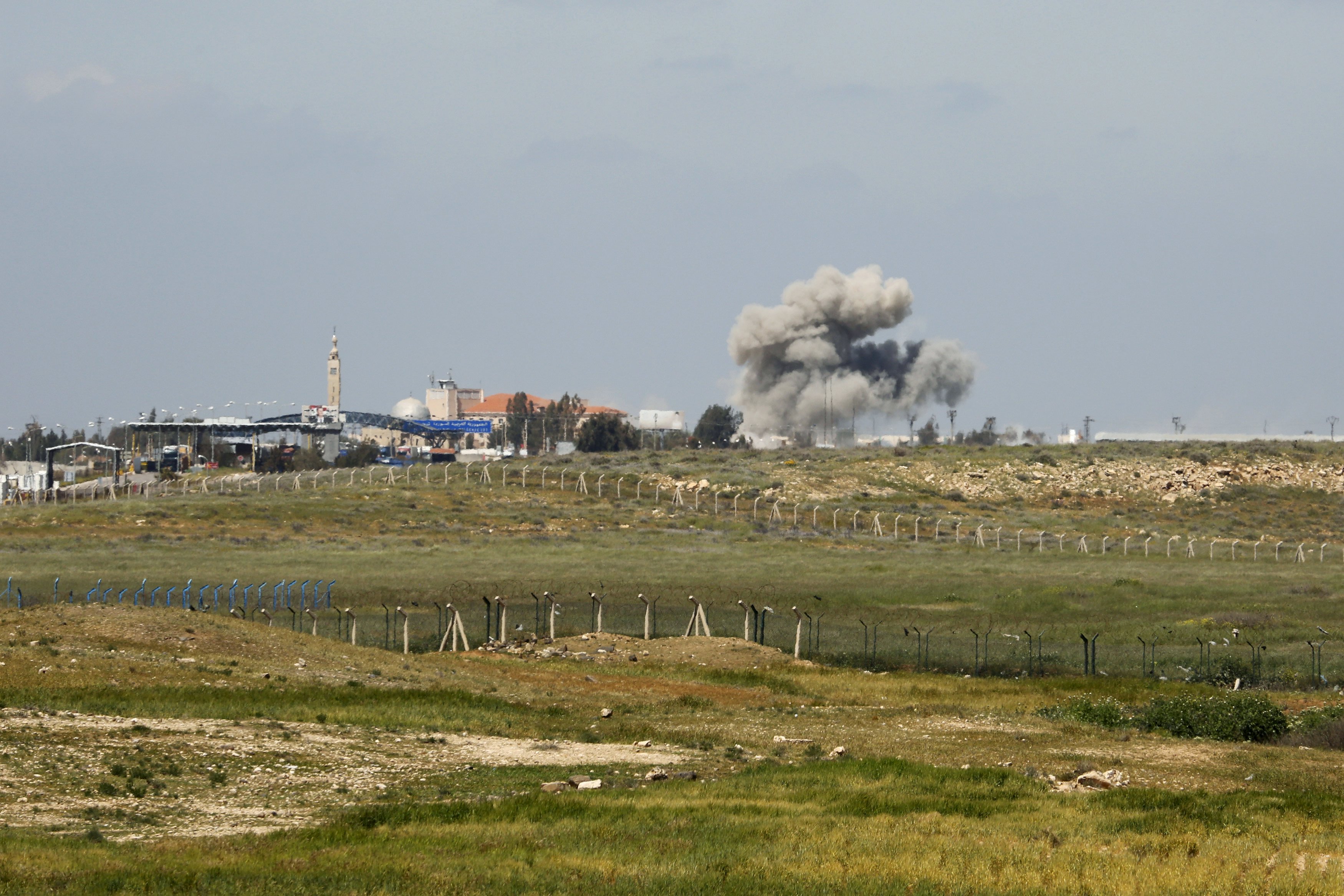 BEIRUT -- Syrian rebels and fighters from the al Qaeda-affiliated Nusra Front have captured the only functioning border crossing with Jordan and three nearby military posts, prompting intense government bombing raids of the area, activists said Thursday.

The capture of the Nasib crossing - a crucial gateway for the Syrian government - is the latest in a series of setbacks for President Bashar Assad's forces in the past week. Fighters led by the Nusra Front seized the government-held city of Idlib in northwestern Syria and a major town, Busra Sham, in the south.

The Jordanian government closed the Nasib crossing on Tuesday night for security reasons as Syrian rebels clashed with Assad's forces on the other side. The rebels seized the crossing within 24 hours.

On Thursday, a plume of thick, black smoke was seen billowing from the Syrian side of the border with Jordan, as Syrian warplanes struck the area. An Associated Press cameraman said dozens of trucks were stranded on the Jordanian side and customs officials have been prevented from going to their offices.

Eyewitnesses and former employees also reported there was significant looting of duty-free shops in the no-man's land between the Syrian and Jordanian side of the crossing.

Ahmad al-Masalmeh, an opposition activist based in the southern Syrian city of Daraa, said rebels finished "combing" operations in the area along the border early Thursday, adding that government forces withdrew in the direction of the nearby Sweida province.

Syrian state TV, however, quoted an unnamed military official as saying that government forces have regrouped near the crossing and taken "positions in new military points."

Syria's Foreign Ministry issued a statement later saying that any use of the rebel-held crossing "will be considered illegitimate." It said Syria closed the crossing after Jordan took a similar step on Wednesday.

Nasib is the only functioning crossing between Jordan and Syria and is considered a major gateway for Syria's government and for Syrian, Lebanese and Jordanian traders and merchants.

Al-Masalmeh, the activist, said three armed factions spearheaded the offensive that captured Nasib and three nearby border guard posts. He added that the Syrian government still controls a post known as the "Amman Brigade," east of Nasib.

The Britain-based Syrian Observatory for Human Rights, which relies on a network of activists inside Syria, said helicopter gunships attacked rebel positions in the area early Thursday.

In Damascus, a Palestinian official said Islamic State of Iraq and Syria (ISIS) fighters were expelled from Yarmouk, a Palestinian refugee camp south of the capital, hours after they stormed it from the nearby neighborhood of Hajar Aswad. The infiltration marked the extremist group's deepest foray yet into the Syrian capital.

Last month, Assad told "60 Minutes" correspondent Charlie Rose that ISIS has "lost a lot of hearts and minds" in Syria.

"You cannot measure it but you can tell that the majority of the people who suffered from ISIS, they are supporting the government and, of course, the rest of the Syrian people are afraid from ISIS and I don't think they would-- I think they lost a lot of hearts and minds," Assad said.

Khaled Abdul-Majid, secretary of the follow-up committee of the Damascus-based allied Palestinian factions, told The Associated Press that reinforcements reached the Palestinian faction called Aknaf Beit al-Maqdis, which was battling the extremist group in the camp.

"There are now intermittent clashes between Hajar Aswad neighborhood and the southern edge of Yarmouk camp," he said.

The Observatory, however, reported that clashes were ongoing and that ISIS militants were making inroads again in the camp Thursday. The reports could not be immediately confirmed.

In Beirut, U.S. Assistant Secretary of State Anne Richard expressed concern over the clashes in the Palestinian camp in Damascus, the prospects of ISIS taking it over and the fate of its residents.

"It's been such a hard situation as you know to reach the 18,000 Palestinians who are left in what used to be a very large neighborhood," she said.