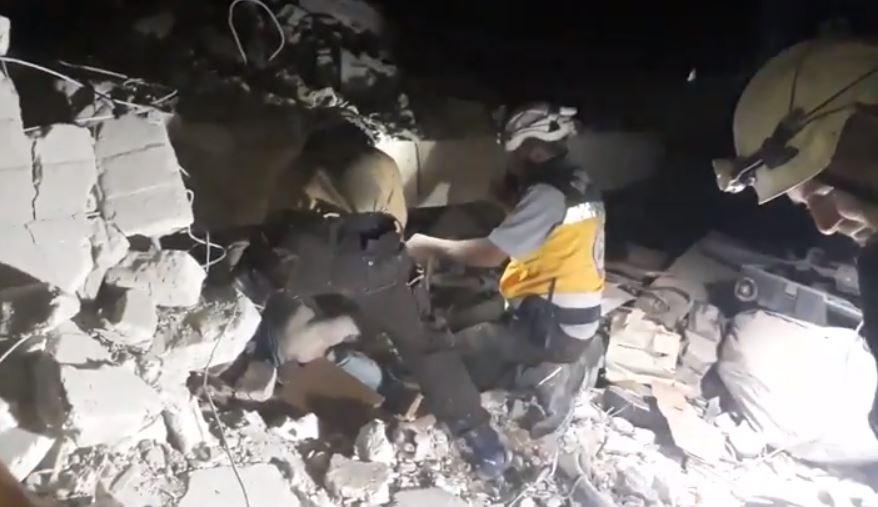 BEIRUT -- Warplanes attacked a rebel-held northwestern village in Syria, killing at least 35 people and wounding dozens more, including children, in one of the deadliest incidents in this part of the country this year, a Syrian war monitor and paramedics said Friday. Russia denied allegations from a U.K.-based war monitoring group that it had carried out the strikes.

The opposition's Syrian Civil Defense, also known as White Helmets, said the airstrike Thursday night killed 35 and wounded 80 in the village of Zardana. It added that the dead included three of its members, who were killed as they evacuated the dead and wounded.

The Britain-based Syrian Observatory for Human Rights said the strike killed 44, including six children and 11 women. It added that the attack occurred after Muslims broke their Ramadan holiday fast after sunset.

It is not uncommon to have conflicting figures in the aftermath of attacks in Syria.

The Observatory said the number could still rise as some of the victims were still under the rubble and some wounded were in critical condition.

The Observatory said the airstrike was carried out by Russian warplanes and is so far the deadliest in Idlib province this year. Tens of thousands of Syrians displaced from other parts of the country have settled in Idlib province over the past two years.

Russia's state-controlled media said later Friday that the Defense Ministry had denied carrying out any strikes in Idlib. The ministry instead blamed artillery fire between rebel groups in the area for the carnage.

Russian news agencies quoted a statement from the ministry as saying the reports of Russian airstrikes were "untrue, do not correspond to reality."

The ministry said instead that "fierce battles took place between the large group of the terrorist organization Jebhat An Nusra and the irreconcilable opposition group Jaysh al-Ahrar, using heavy artillery weapons, in the specified area of Idlib Province."

Airstrikes have been relatively uncommon in recent months in the rebel-held province, which is part of a de-escalation zone agreed on last year by Russia, Turkey and Iran.