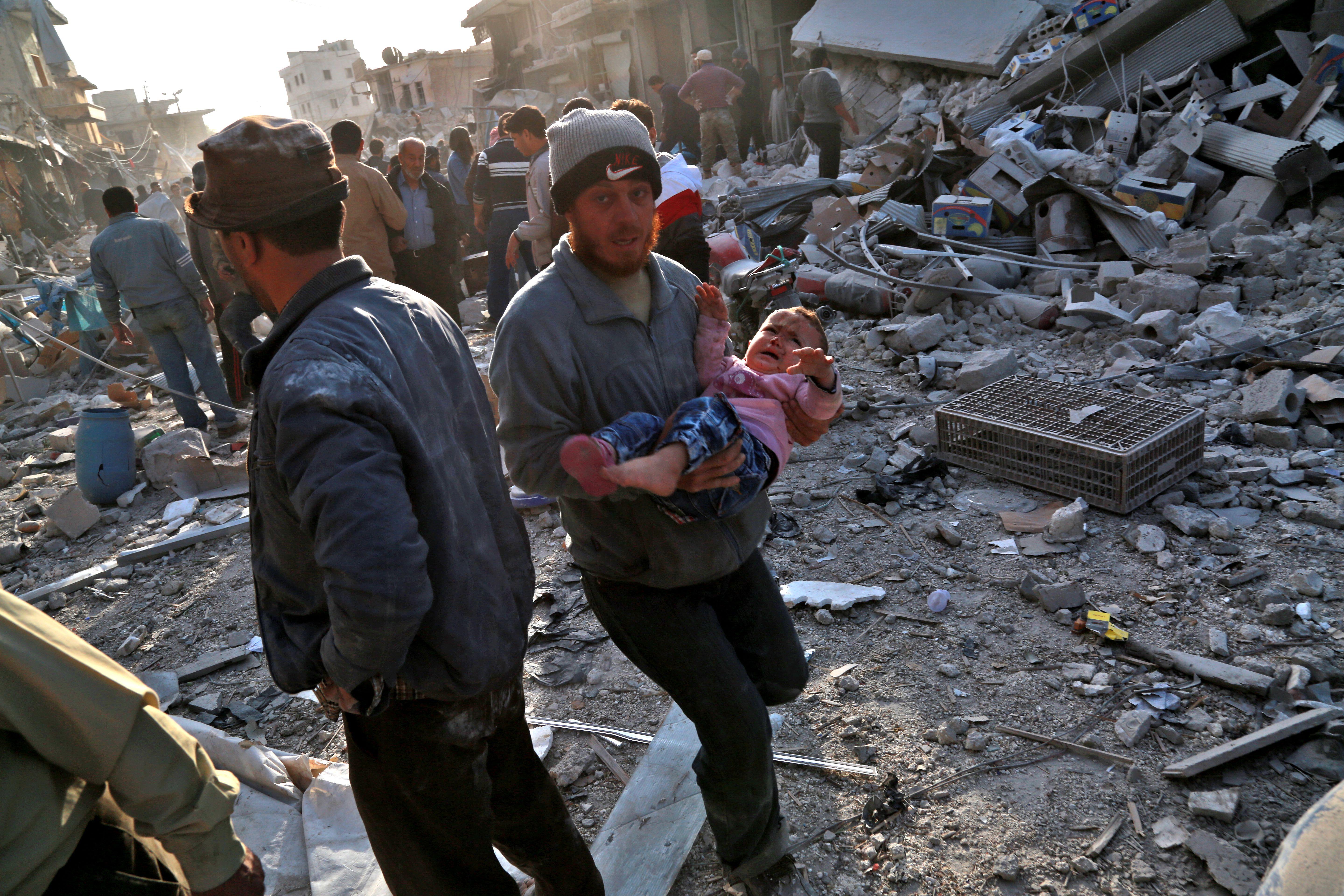 BEIRUT -- More than 60 people were killed in a ferocious attack on a market in north Syria on Monday that left rescuers and survivors digging late into the evening to search for residents still buried under the rubble.

There were at least three airstrikes on the market at Atareb, a town in the Aleppo countryside swollen by the arrival of refugees from nearby battles, in the latest breach of a "de-escalation" agreement that has proven largely unenforceable. Aleppo, Syria's largest city, is controlled by the government.

The attack tore market-goers apart, according to media published by the activist-run Thiqa news agency. Survivors found limbs in the rubble and corpses with heads ripped apart by the force of the blasts.

A police station by the market was also struck, killing an officer, according to the Britain-based Syrian Observatory for Human Rights monitoring group.

"A number of people died of their wounds, bringing the toll to 61 people, including five children and three policemen," the Observatory said Tuesday morning.

Observatory said it could not determine whether the Syrian government or its chief backer, Russia, was behind the airstrikes.

Atareb and the countryside around it remain outside the control of the Damascus-based government which says it wants to retake all of Syria following six years of civil war that has killed at least 400,000 people and displaced 11 million others -- half the country's population. The war began after a violent crackdown against demonstrations calling for reforms in 2011. It has drawn in fighters from across the world.

President Bashar Assad says he is fighting a war on terror.

Russia's intervention on the side of Assad in 2015 turned the tide in his favor.

Atareb and the opposition-held countryside in northwest Syria are meant to be protected by a "de-escalation agreement" brokered earlier this year by Russia, Iran, and Turkey, the main backers of the Syrian government and the opposition.

The U.S. and Russia have lately renewed efforts to find a settlement for post-war Syria.

With their common enemy, the Islamic State of Iraq and Syria (ISIS), nearing defeat, the two superpowers find themselves again on opposite sides of the conflict, with Moscow backing Assad and the U.S. offering rhetorical support to armed opposition groups fighting the government.

In a joint statement Saturday, the two countries said "de-escalation areas" were an "interim step" toward restoring peace in Syria and that there could be "no military solution" to the war.

But on Tuesday Russia made it clear that even on the point of ISIS being a common enemy, Moscow and Washington continue to hold divergent opinions; Russia's Defense Ministry accused the U.S. of directly supporting ISIS in a recent battle for a town on the Iraqi border.

"The operation to regain control of Abu Kamal held by the Syrian government troops late last week exposed instances of direct interaction with and support for Islamic State terrorists by the U.S.-led international coalition," the Defense Ministry said, according to Russia's state-run news agency TASS. The Ministry accused U.S. forces of blocking Russian strikes on ISIS militants around the town.

The previous joint U.S.-Russian statement, made over the weekend, drew a sarcastic response from Turkish President Recep Tayyip Erdogan, who said the two superpowers could start by withdrawing their own troops from the war and instead support holding elections in Syria.

He said there were five Russian and thirteen U.S. bases in Syria, plus a fourteenth under construction in the northern city of Raqqa, now administered by a U.S.-backed Kurdish party that Turkey says is an extension of a separatist group operating within its own borders. Turkey considers the group a terrorist organization.

Erdogan ordered Turkey's military into north Syria in 2016 to battle Kurdish militias and ISIS. It maintains a presence along opposition-held areas near the Turkish border.

Also Monday, London-based Amnesty International released a report saying that under so-called "reconciliation" agreements, government sieges and intense bombardments of some rebel-held areas in Syria have given no choice for residents but to leave or die.

The report said that the Syrian government and, to a lesser extent, armed opposition groups "have unlawfully besieged civilians, depriving them of food, medicine and other basic necessities, and carried out unlawful attacks on densely populated areas."

Tens of thousands of people have been displaced over the past years as a result of such sieges including areas near the capital Damascus and the northern city of Aleppo, as well as in the central city of Homs.

"While the Syrian government's stated aim has been to vanquish opposition fighters, its cynical use of surrender or starve tactics... have been part of a systematic, as well as widespread, attack on civilians that amounts to crimes against humanity," said Philip Luther, research and advocacy director for the Middle East and North Africa at Amnesty International.

Hours before the report was released, Syria's state news agency SANA said an aid convoy had crossed into the besieged Damascus suburb of Douma under the supervision of the Syrian Arab Red Crescent. It said it consisted of 24 trucks and entered the besieged area late Sunday with the cooperation of the United Nations.

Hamoud, in comments to Al-Watan newspaper published Monday, said 1,800 kilometers of the country's 2,450-kilometer railway network have been destroyed.

At least 50 bridges have been destroyed including several vital ones leading to the country's coastal provinces, its largest city Aleppo, and across the Euphrates River to Raqqa and Deir el-Zour, once key strongholds of ISIS fighters.

Traffic to Syria's Mediterranean ports has also plummeted. The ports are receiving around 1,500 ships annually, down from 4,500 before the war, trading 9 million tons of goods, down from 24 million.