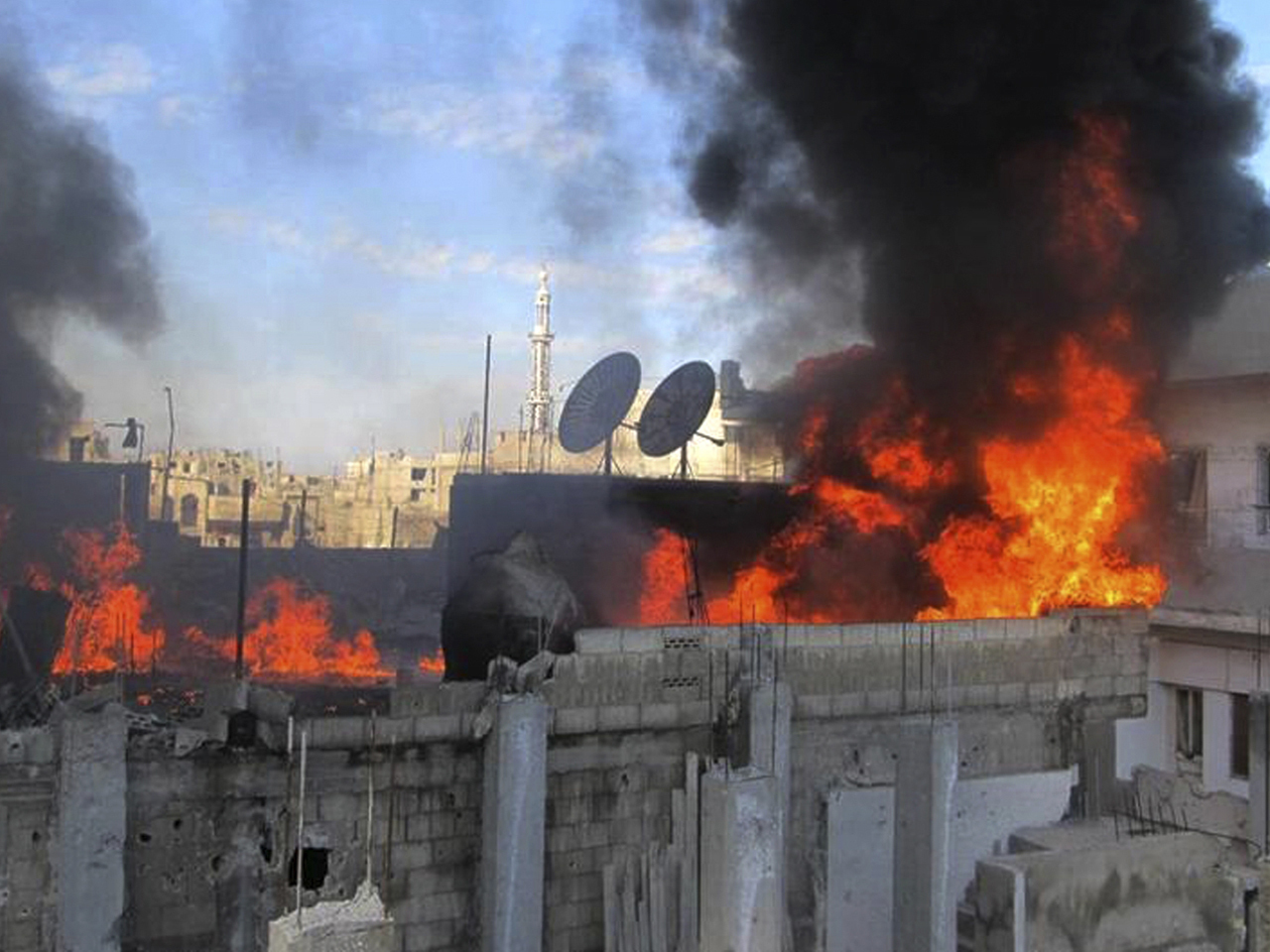 BEIRUT Syrian government forces have seized control of a long-contested neighborhood in the central city of Homs that is considered a symbol of opposition to President Bashar Assad's regime, anti-regime activist said Tuesday.

The recapture of Baba Amr came as Syrian opposition representatives took the country's seat for the first time at an Arab League summit, a significant diplomatic boost for the rebel forces.

The Britain-based Syrian Observatory for Human Rights said that government forces pushed rebels from Baba Amr after two weeks of clashes, shelling and air strikes that destroyed many homes.

The Syrian state news agency SANA said Monday that government forces had "restored security and stability" to the neighborhood.

Baba Amr, a poor neighborhood in southwest Homs, emerged early in the uprising as a symbol of the rebel movement, first for its protests and later for the armed groups who held it against regime troops.

While not strategically important in the two-year civil war, the loss of Baba Amr is a symbolic blow to the rebels.

The government seized the neighborhood in March of last year after months of daily shelling that damaged much of the area and killed hundreds, including two foreign journalists who had sneaked into the area to report on the siege.

It has changed hands a number of times since, with rebels saying early this month that they had taken advantage of a regime security lapse to take it back and set up checkpoints.

The regime has ample heavy weapons and a fleet of fighter jets but a shortage of ground troops, meaning it often abandons areas to rebel forces then pounds them with artillery and air strikes from afar, sometimes forcing rebel retreats.

It also frequently claims to have "secured" areas only to report months later that it "secured" them again, with little explanation of how rebels got back in.

Also Tuesday, the Observatory said that at least 13 charred bodies, including those of four children and five women, were found on the outskirts of the village of Abil, southwest of Homs city.

The group, which relies on a network of contacts inside Syria, circulated a video that showed charred and disfigured bodies laid out on sheets. Some had holes in their heads and others appeared to have had their throats slit.

The video appeared authentic and corresponded with other reporting by The Associated Press.

The Syrian government does not respond to requests for comment and did not mention the killing in official media.

Meanwhile, at the Arab League summit in Qatar, a delegation led by former president of the main opposition alliance Mouaz al-Khatib took the seats assigned for Syria to the applause of other delegates.

The decision for the Western-backed Syrian National Coalition to take Syria's seat was made at the recommendation of Arab foreign ministers meeting earlier this week in the Qatari capital, Doha. The Arab League in 2011 suspended the Syrian government's membership in the organization in punishment for the regime's crackdown on opponents.

The diplomatic triumph, however, could not conceal the disarray within the top ranks of the Syrian opposition.

Addressing the gathering, al-Khatib thanked the Arab League for granting the seat to the opposition.

"It is part of the restoration of legitimacy that the people of Syria have long been robbed of," he said.

Even as rebel fighters gain more territory on the ground in their fight against Assad's troops, their mostly exile political leadership has been thrown into disarray. Al-Khatib announced his resignation on Sunday because of what he described as restrictions on his work and frustration with the level of international aid for the opposition. The coalition rejected the resignation and al-Khatib said he would discuss the issue later and represent the opposition at the Qatar summit "in the name of the Syrian people."

Also, Hitto's election as the head of the interim government was rejected by the opposition's military office, which said he was not a consensus figure. Some members have accused Qatar and the Muslim Brotherhood of imposing their will on the Coalition.

In Damascus, the government on Tuesday blasted the Arab League's move to allow the opposition to take its seat at the Doha summit, portraying it a selling-out of Arab identity to please Israel and the United States.

"The Arab League has blown up all its charters and pledges to preserve common Arab security, and the shameful decisions it has taken against the Syrian people since the beginning of the crisis and until now have sustained our conviction that it has exchanged its Arab identity with a Zionist-American one," said an editorial in the Al-Thawra newspaper, a government mouthpiece.

The crisis began in March 2011 with protests demanding Assad's ouster. With a harsh government crackdown, the uprising steadily grew more violent until it became a full-fledged civil war. The United Nations estimates that more than 70,000 people have died so far in the conflict.