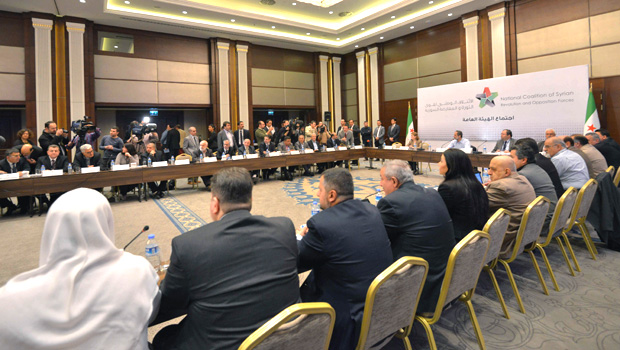 BEIRUT Syria's Western-backed opposition plunged into disarray on Sunday as its president resigned and its military leader refused to recognize a prime minister recently elected to lead an interim rebel government.

The chaos inside the opposition Syrian National Coalition threatened to undermine its bid to unite the forces battling President Bashar Assad and better organize the fight to oust his regime. It also could hamper support from the U.S. and other powers, who have hoped the Coalition would emerge as the most credible body to channel aid to anti-Assad groups inside Syria and undermine the Islamic extremists who dominate the fight on key fronts of the nation's civil war.

As the opposition's political leadership stumbled, rebel fighters inside Syria pressed ahead Sunday with their offensive in a restive southern province that borders Jordan. Also, Israel's military said its forces in the occupied Golan Heights responded to fireacross the border by shooting at a target inside Syria.

In his surprise resignation Sunday, Coalition president Mouaz al-Khatib expressed frustration with the both the international community and the opposition body itself. Al-Khatib, a respected preacher who has led the Coalition since its creation late last year, said in a statement posted on his Facebook page that he was making good on a vow to quit if certain undefined "red lines" were crossed.

"I am keeping my promise today and announcing my resignation from the National Coalition so that I can work with freedom that is not available inside the official institutions," he said.

He also blamed world powers for providing what he deemed insufficient support for the rebel cause, and complained that many "international and regional parties" have insisted on pushing the opposition toward dialogue with the regime. Most opposition leaders and activists say Assad's regime has killed too many people to be part of a solution to the conflict.

Despite electing a new, U.S.-educated prime minister to head a planned interim government last week, the Coalition has failed to establish itself as the top opposition authority on the ground in Syria, where hundreds of independent rebel brigades are fighting a civil war against Assad's forces.

The Coalition's media office distributed al-Khatib's statement, but did not comment on how his replacement will be chosen.

Al-Khatib's spokesman, Ali Mohammed Ali, confirmed the authenticity of the statement in a phone call with The Associated Press. He declined to discuss any issues inside the Coalition that could have influenced al-Khatib's decision.

Burhan Ghalioun, the former head of the Syrian National Council, which preceded the Coalition, said that he and other Coalition members were surprised by the resignation.

Speaking on Al Arabiya TV, Ghalioun also said he assumed the decision was a protest against world powers that have not provided the opposition with the aid it needs, as well as against unnamed countries that have interfered in the Coalition's operations and other Coalition members who have impeded al-Khatib's work.

"I lived this, so I know what it means," Ghalioun said, speaking of his own resignation as head of the SNC last year.

Secretary of State John Kerry said he was sorry to learn of al-Khatib's resignation, but that it won't affect U.S. cooperation with the Coalition on aid.

He called such transitions natural, adding that it shows "an opposition that is bigger than one person, and that opposition will continue."

The second blow Sunday to the opposition leadership was delivered by the head of the Coalition's own military branch, Gen. Salim Idris, who refused to recognize the body's new prime minister, saying he did not represent many anti-Assad groups.

But in a video statement posted online and distributed by his aides Sunday, Idris said his group would only support a prime minister with broad backing.

"For the purpose of giving power to a prime minister to unite the revolutionary forces and lead the Syrian revolution toward certain victory, we unequivocally declare that the Free Syrian Army in all of its formations and revolutionary powers conditions its support and cooperation on the achievement of a political agreement on the name of a prime minister," he said.

Hitto received 35 out of 48 votes cast by the 63 active members of the opposition Syrian National Coalition last week.

Observers and some members of the Coalition complained after the vote that Qatar, which heavily finances the opposition, and the Muslim Brotherhood exercise outsized power inside the Coalition.

The Syrian government has largely ignored the opposition Coalition and says the civil war is an international conspiracy to weaken Syria.

Syria's conflict has split regional and world powers, with some backing the rebels and others standing by Assad. Russia, China and Iran remain the regime's strongest supporters.

On Sunday, Kerry told reporters during an unannounced trip to Baghdad that he had made it clear to Iraq, Syria's eastern neighbor, that it should not allow Iran to use its airspace to shuttle weapons and fighters to Syria.

Kerry said he told Iraqi Prime Minister Nouri al-Maliki that the transfer of anything that supports President Bashar Assad and his regime is "problematic."

Inside Syria, rebels pushed forward in the restive southern province of Daraa, which borders Jordan.

A victory on the frontier with Jordan would be a significant advance for the opposition. It would deprive Assad of control over a supply lifeline also used by refugees fleeing his military onslaught, and could facilitate the entry of arms and equipment to the rebels.

Since summer, 2012, rebels have seized control of large swathes of land near the Turkish and Iraqi borders to the north and east, respectively, and used these areas to organize their forces and build supply lines. But the opposition has struggled so far to carve out a similar area in the south from which they could marshal their forces for a more sustained push north toward Damascus.

A Jordanian border official said he heard heavy artillery and saw smoke rising from areas in the province's Yarmouk Valley, a route used by Syrian refugees fleeing the fighting to Jordan. The official insisted on anonymity, citing army regulations.

Also Sunday, Israel's military said its soldiers were on routine patrol in the Golan Heights when they were fired upon and responded. It did not say what weaponry was used or specify if those firing from Syria were rebels or government forces.

For the last week, Syrian rebels have been capturing territory at the foot of the Golan Heights, a strategic plateau that Israel captured from Syria in the 1967 Mideast war and later annexed.

The Syrian Observatory also reported clashes in two districts in the Syrian capital, including near the Damascus international airport. It said the army, backed by warplanes, struck at rebel targets in the northern city of Hama.