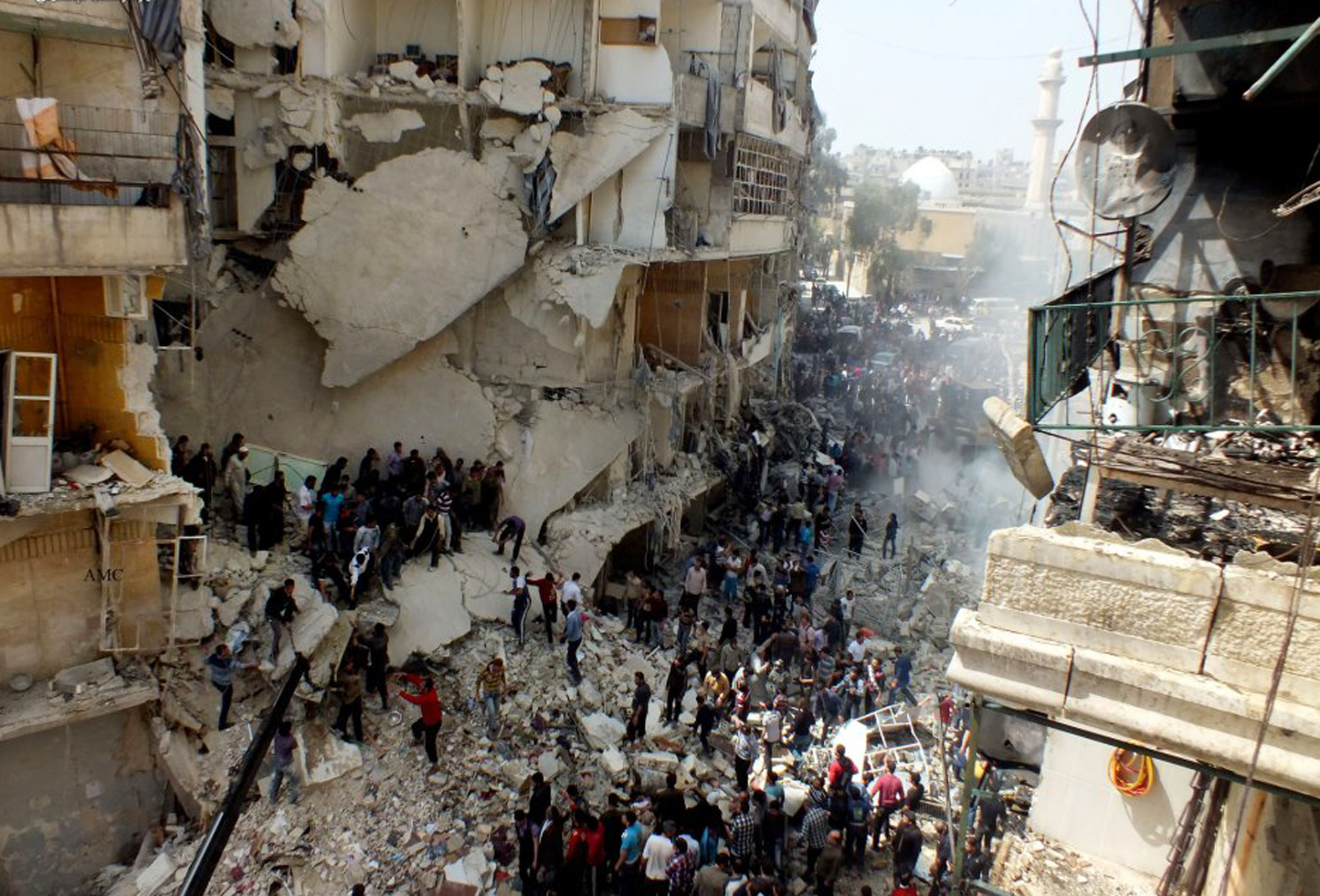 BEIRUT The Syrian regime has carried out indiscriminate and sometimes deliberate air strikes against civilians that have killed at least 4,300 people since last summer and that amount to war crimes, an international human rights group said Thursday.

Parts of northern Syria — especially areas along the border with Turkey — have in the past months fallen under the control of rebels fighting to topple President Bashar Assad, including several neighborhoods of the northern city of Aleppo, the country's largest urban center.

"The aim of the air strikes appears to be to terrorize civilians from the air, particularly in the opposition-controlled areas where they would otherwise be fairly safe from any effects of fighting," Ole Solvang of the New York-based group told The Associated Press.

These attacks are "serious violations of international humanitarian law," and people who commit such breaches are "responsible for war crimes," the New York-based group said.

Solvang led the HRW team that inspected 52 sites in northern Syria and documented 59 unlawful attacks by the Syrian Air Force. At least 152 people were killed in these attacks, according to a HRW report released Thursday.

The HRW report puts a casualty figure for the first time on the indiscriminate bombardment of civilian areas which CBS News has witnessed first-hand on forays into rebel-held territory.

In most of the strikes, the regime planes appear to have had no military target in sight, such as armed opposition supporters or rebel headquarters, when they dropped their weapons on civilian areas, the group said.

The 80-page HRW report said that across Syria, more than 4,300 civilians have been killed in attacks by Assad's jets since last July.

The report is the most comprehensive study of Syrian air force operations since last summer, when the Assad's forces started to rely heavily on fighter jets to repel rebel advances and reverse their territorial gains.

Officials in Damascus could not immediately be reached for comment on the report.

The opposition now controls large swathes of northern Syria, and last month captured their first provincial capital, the city of Raqqa. The opposition fighters also control whole districts of Aleppo, and some key infrastructure in the east, including oil fields and dams on the Euphrates River.

With the recent influx of better weapons and other foreign aid, the rebels have also made major gains in the south, seizing military bases and towns in the strategically important region between Damascus and the border with Jordan, about 100 miles from the capital.

The opposition fighters hope to eventually storm Damascus from the south.

While the rebels have made major gains, they often cannot hold on to the territory because of the regime's superior air power. The continued threat from the air has also stalled efforts to effectively govern rebel-held areas, allowing opposition leaders from the Western-backed alliance only brief excursions into areas under rebel control.

The new weapons pouring in from friendly governments in the Arab world and Europe have given the rebels an increased ability to target Assad's warplanes and helicopters. There have been numerous videos posted of Syrian army planes and helicopters, allegedly downed by rebels. The latest, posted Thursday, shows rebels celebrating after claiming to have shot down a helicopter gunship in the town of Maraat Nouman, where Ward and her crew were just days ago.

For its part, the Syrian National Coalition has been marred by severe divisions in its ranks since its formation late last year in Qatar, and its leaders are mostly seen as disconnected from the myriad rebel forces fighting inside Syria.

U.S. Secretary of State John Kerry met with opposition leaders in London on Wednesday to discuss ways to step up aid to rebels fighting to topple the regime in Damascus.

HRW noted that in the past weeks, Assad's jets have increasingly been hitting targets around Syria, including in the capital Damascus and in Raqqa, the city recently captured by the rebels. The air raids in the rebel-held northern areas occur daily, the group said.

They air strike campaign appears to be aimed at preventing the opposition from running the areas captured from the regime.

"The air force has no other reason to continue hitting rebel areas but to prove to the opposition that it can't rule," Solvang said in a phone interview on Thursday.

The United Nations says that more than 70,000 people have been killed in Syria's 2-year-old conflict. It started with peaceful protests against Assad's rule, inspired by other Arab Spring uprisings, but following a harsh regime crackdown descended into full-blown civil war.