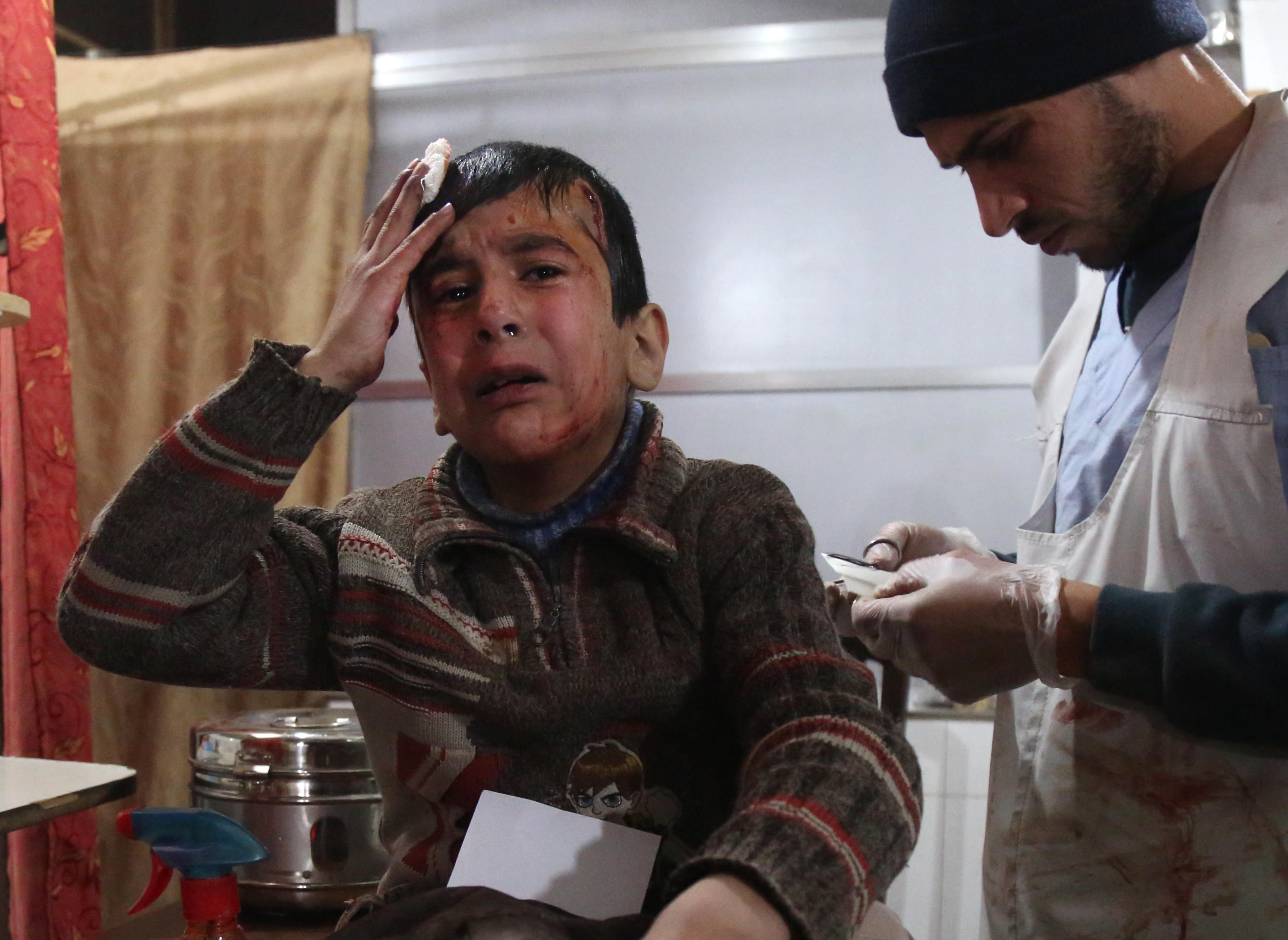 BEIRUT -- Intense Syrian government shelling and airstrikes on rebel-held Damascus suburbs killed nearly 130 people in two days, marking some of the deadliest bombardment of the rebellious region in three years, a monitoring group and paramedics said Tuesday. Retaliatory shells rained down on Damascus, killing at least eight people and causing panic among residents of the Syrian capital, the seat of President Bashar Assad's power.

The violence in the capital and nearby areas came as scores of pro-government gunmen began entering the northern Kurdish enclave of Afrin. Turkish troops shelled the areas shortly after the fighters entered the area, forcing journalists to flee. Turkish state media reported the pro-government forces then fell back 10 kilometers -- 6 miles -- from Afrin city.

The targeted suburbs, scattered across an area known as eastern Ghouta, have been subjected to weeks-long bombardment that has killed and wounded hundreds of people. Opposition activists say government forces have brought in more reinforcements in recent days, suggesting a major assault is imminent to recapture the area that is the last main rebel stronghold near Damascus.

The area that has been under tight siege since last year where people suffer from food shortage is home to some 400,000 people as well as thousands of insurgents belonging to different factions.

Videos from the eastern suburbs showed paramedics pulling out the injured from under the rubble while others are seen franticly digging through the debris in the dark, in search for survivors.

Monday's bombardment that killed nearly 100 people saw the use of warplanes, helicopter gunships, missiles as well as artillery, in a major escalation of violence near President Bashar Assad's seat of power. The Britain-based Syrian Observatory for Human Rights said it was the deadliest days in eastern Ghouta since 2015, adding that 20 children and 15 women were among those killed.

The opposition-affiliated Syrian Civil Defense, also known as White Helmets, said the shelling and airstrikes killed 98 and that some people are still under the rubble. It said the dead included one of the rescue group's members, Firas Jomaa.

The Observatory said the "crazy shelling" appears to be paving the way for a wide ground offensive on eastern Ghouta. If captured by government forces it would be another major victory for Assad since the conflict began seven years ago.

"It's a bloody day," said Abdelrahman Shahin, a 31-year-old resident of Damascus who was walking on the street when a shell landed on a nearby taxi, killing the driver and a passenger in front of his eyes.

"They both died," he said, visibly shaken. "The driver was out for his livelihood, his family will be waiting for him," he said.

Syrian state TV later reported live from the streets of Damascus to show what it called the people's "steadfastness" despite the shelling. The TV reporter said residents expressed hope that the Syrian army would retake eastern Ghouta.

Army of Islam official Mohammed Alloush and Nasr al-Hariri, who heads the committee that represents the Syrian opposition, described what is happening in eastern Ghouta as a new "Holocaust" committed by the government and its backers Iran and Russia.

The U.N. envoy for Syria Staffan de Mistura decried a recent upsurge in violence, expressing concerns that eastern Ghouta could fall victim to widespread bloodshed like that in northern Aleppo more than a year ago. Assad's forces captured Aleppo in December 2016 in his biggest victory since the conflict began in March 2011.

"Bottom line: if we have learned something from Aleppo, (it's) time to actually avoid all this," de Mistura said.

The U.N. children's agency, UNICEF, issued a one-page statement of protest against the killings and carried a headline, saying: "Do those inflicting the suffering still have words to justify their barbaric acts?"

The headline was followed by a blank space underneath. UNICEF said it issued this blank statement because "we no longer have the words to describe children's suffering and our outrage."

The International Committee of the Red Cross also issued a statement saying that "this cannot go on." It added that "distressing reports" of dozens injured and killed every day in eastern Ghouta with "families trapped, with no safe place to hide from shelling. Dozens of mortars in Damascus cause civilian casualties and spread fear. We cannot let history repeat itself."

"The humanitarian situation of civilians in East Ghouta is spiraling out of control," said Panos Moumtzis, the U.N. regional humanitarian coordinator for the Syria crisis, in a statement late Monday.

"It's imperative to end this senseless human suffering now. Such targeting of innocent civilians and infrastructure must stop now," he said.

The violence has increased in Syria while a proposal in the United Nations Security Council for a 30-day humanitarian ceasefire has languished. As recently as Feb. 14, U.N. representatives from the U.K. and Sweden told CBS News' Pamela Falk that a draft resolution for the ceasefire was still moving forward.

"We see the Assad regime continue to bomb, starve, and, yes, gas civilians," U.S. Ambassador Nikki Haley said on Valentine's Day, adding that for the Geneva process to work, Russia must pressure Assad to change his behavior.

Earlier in February, however, U.N. officials admitted that diplomatic efforts were failing. In Geneva, U.N. Special Adviser Jan Egeland said the efforts appeared "totally impotent," and were "getting nowhere."

"The level of destruction and human suffering we're witnessing in the besieged enclave of Eastern Ghouta is unprecedented and catastrophic," WFP Executive Director David Beasley told CBS News early in February. "Aerial bombardment and artillery attacks are claiming the lives of innocent men, women and children. Shortages of food, water, medicine and other items have driven people to the brink of endurance."

"The World Food Programme (WFP) joins other U.N. agencies in calling for an immediate pause in hostilities so we can deliver life-saving assistance to the people of Eastern Ghouta who so desperately need our help," Beasley said.

Jakob Kern, the WFP's Syria country director, said that on his last visit to Ghouta he saw children "rummaging through garbage, eating animal fodder," and whatever else they could scrounge from the streets.

"Desperation is an understatement," Kern said of the situation in the Damascus suburbs, noting that many of the children trapped in areas still under rebel control have "never seen the inside of a classroom."

"What does that mean for the next generation?"

Ghouta has not seen a single humanitarian aid convoy for two months.

In northern Syria, Syrian state TV reported that Turkish troops shelled the entrance of the northern Kurdish enclave of Afrin shortly after scores of pro-government fighters entered the area. The TV showed shells falling in an area where journalists gathered Tuesday afternoon forcing some of them to flee the area.

Minutes before the shelling, about 20 vehicles with heavy machine guns mounted on them were seen entering the area as part of an agreement between the government and the main Kurdish militia in Syria known as the People's Protection Units, or YPG. Turkish state media reported the pro-government forces then fell back 10 kilometers (6 miles) from Afrin city.

Turkey has threatened Syrian troops not to help YPG fighters, warning that it will fight its backers.

Ankara considers the YPG a "terrorist group" linked to the Kurdish insurgency within Turkey's borders. On Jan. 20, it launched a major air and ground offensive, pounding the enclave with airstrikes and artillery on a daily basis.