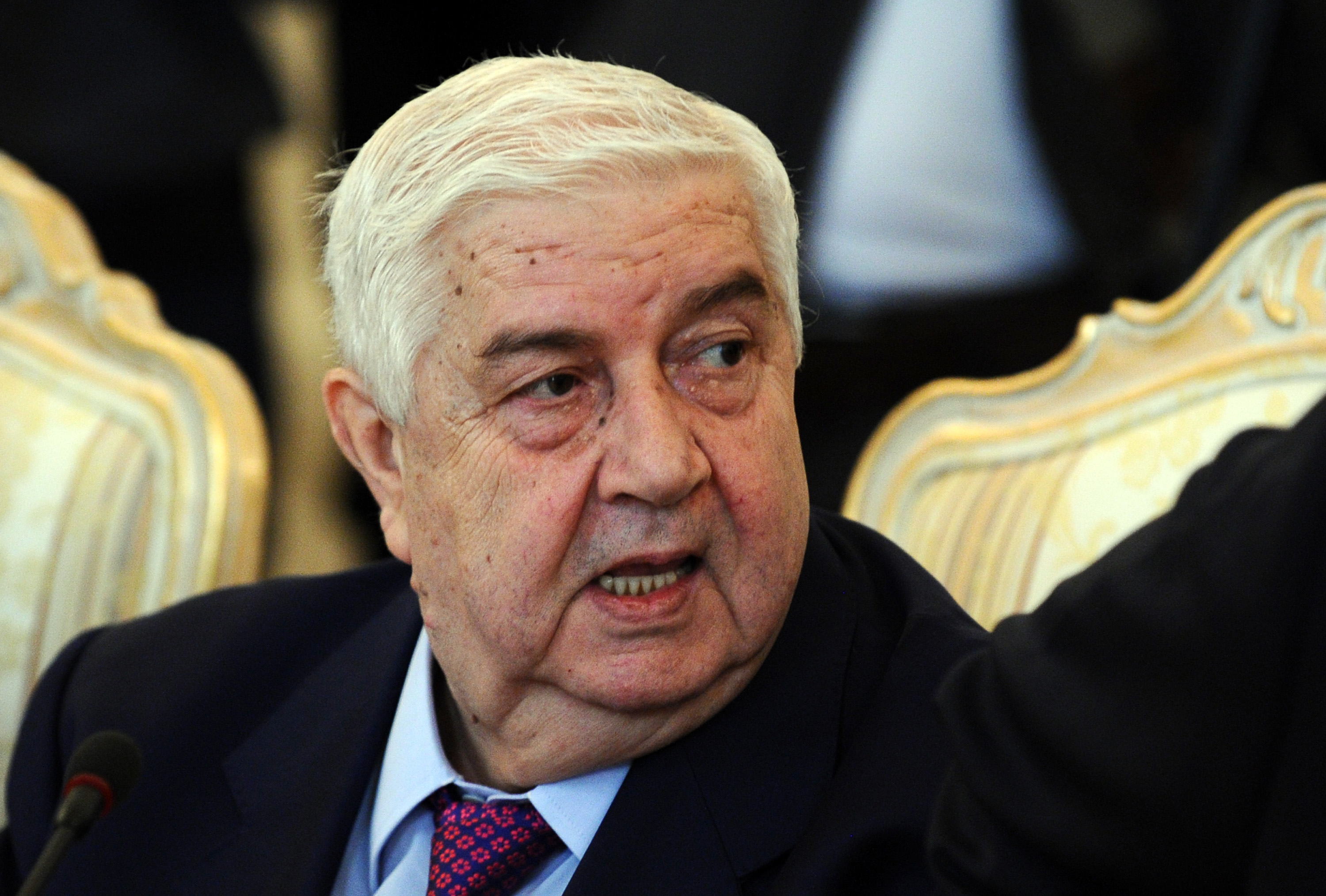 Syria's foreign minister challenged the Obama administration and its allies on Tuesday to "produce the evidence" showing Bashar Assad's government was behind a chemical weapons attack in the suburbs of Damascus last week, saying the information available on which side was behind the deadly attack provided a "weak and inaccurate" case for military intervention from the West.

Walid Muallem said he was holding the televised news conference in Damascus to inform the American public that the Obama administration's assertion that there could be "little doubt" the Assad regime was behind the apparent chemical attack in the eastern Ghouta suburbs of Damascus "is completely wrong."

U.S. Secretary of State John Kerry said Monday there was "undeniable" evidence of a large-scale chemical weapons attack in the Ghouta area, with intelligence strongly pointing to Assad's government.

"This international norm cannot be violated without consequences," said Kerry, calling the use of such weapons a "moral obscenity."

Kerry's tough language marked the clearest justification yet for U.S. military action in Syria which, if President Obama decides to act, would most likely involve sea-launched cruise missile attacks on Syrian military targets.

Keenly aware of the prospect that U.S. missiles could soon target sites in his country, Muallem sought Tuesday to undermine the arguments presented as circumstantial evidence of his government's culpability in the Ghouta attack, which left somewhere between 330 and 1,800 people dead.

A senior Obama administration official told CBS News over the weekend that the U.S. intelligence community had based its assessment given to the White House, claiming Assad regime was responsible for the attack, on "the reported number of victims, reported symptoms of those who were killed or injured," and witness accounts.

According to various chemical weapons and security analysts, the strongest evidence pointing to the attack having been carried out by Assad's forces is the sheer scale of the casualty toll and the area involved. Few believe the discordant rebel factions on the ground in Syria possess the weapons, delivery systems or expertise required to launch a large-scale chemical attack.

President Assad's government denied involvement from the outset, however, suggesting the rebels were behind the use of chemical agents in Ghouta. On Saturday, Syrian state TV broadcast images of what the government claims were chemical agents discovered by soldiers in tunnels used by rebel forces in the suburbs.

U.S. and European nations have also accused the Assad regime of delaying access to the Ghouta sites for a team of about 20 United Nations weapons inspectors in the country. Obama administration officials said the team, which arrived in Damascus just days before the alleged attack in Damascus, was deliberately denied access to the suburbs by the regime for days.

A senior State Department official said if the Syrian regime wanted to prove to the world that it had not used chemical weapons in Ghouta, the government would have stopped shelling the area and granted access immediately following the incident. A senior administration official told CBS News before an agreement between the U.N. inspectors and the Assad regime was reached on Sunday that any move to allow the team into the area would already be too little, too late.

"At this juncture, any belated decision by the regime to grant access to the UN team would be considered too late to be credible, including because the evidence available has been significantly corrupted as a result of the regime's persistent shelling and other intentional actions over the last five days," the official said on the condition of anonymity.

Muallem rejected that argument on Tuesday, saying his government only received the request from U.N. disarmament chief Angela Kane to visit the Moadamiyeh suburb in Ghouta on Saturday.

"Miss Kane came on Saturday, on Sunday we agreed and on Monday, they (the U.N. inspectors) went to Moadamiyeh. We did not argue about the sites they wanted to visit. We agreed straight away," said Muallem. "How could we be accused of causing a delay?"

Muallem said rebel snipers were responsible for the U.N. team's convoy coming under fire as it tried to enter opposition-held territory in Moadamiyeh, and that the inspectors were forced to withdrawal to a government checkpoint before venturing again into the area.

He also said he was "surprised to learn" on Tuesday that the inspection team was "not able to go to a second site because armed groups did not agree among themselves" to guarantee their security.

"I am saying this so that you will know that the Syrian side is implementing its commitments," said Muallem.

CBS News correspondent Holly Williams notes that, while the U.N. inspectors are tasked with determining whether or not chemical weapons were used, it is not their job to say who used them.

Williams reports that several countries, including Britain, France and Turkey, have now joined the U.S. in blaming the regime for the chemical attack and calling for some kind of military response. She notes, however, that if the U.S. does intervene in Syria, it will likely anger Assad's allies in Russia and Iran.

Russia and China have warned the U.S. not to preempt the results of the U.N. investigation.