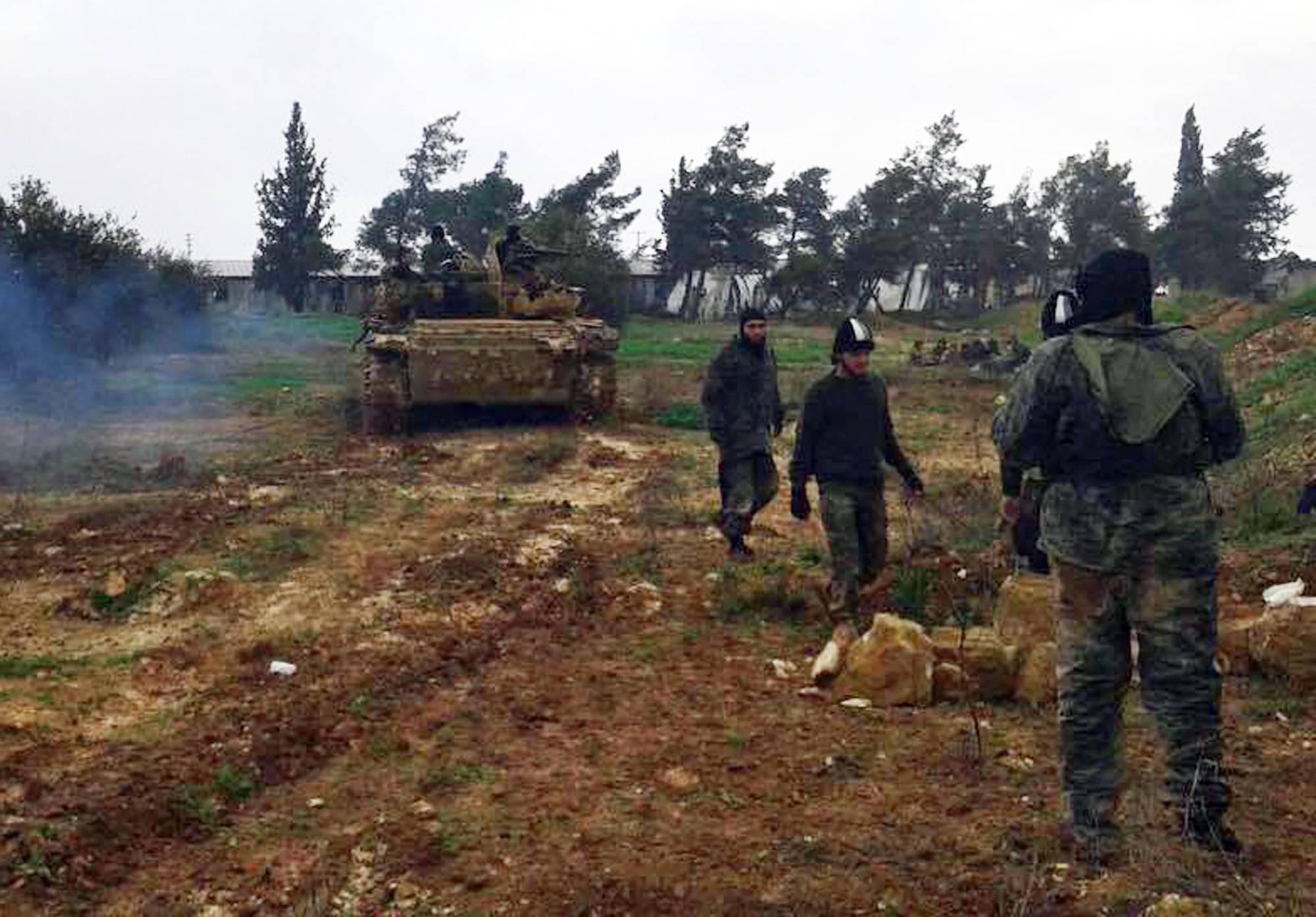 BEIRUT -- With Syria's shaky cease-fire holding, peaceful protesters have yet again taken to the streets in opposition-held areas of the country. But this time, in addition to President Bashar Assad's government, they have another despised authority they seek to topple -- al Qaeda's affiliate in the country, the oppressive Nusra Front.

The developments have raised questions as to whether the al Qaeda branch can be sidelined -- or in fact even completely eradicated -- from any future scenarios for Syria.

In the northwestern province of Idlib, protesters recently set fire to an office belonging to the Nusra Front after major fighting in the area saw the al Qaeda-linked militants crush a division of the U.S.-backed rebel Free Syrian Army, which has become popular with residents in the town of Maaret al-Numan and elsewhere across the province.

The nearly three-week truce -- which excludes the Nusra Front and its rival, the Islamic State of Iraq and Syria (ISIS), both designated by the United Nations as terrorist organizations -- and the peace talks currently underway in Geneva between the Syrian government and Western-backed rebels have increased pressure on the Nusra Front.

According to Charles Lister, a Middle East Institute fellow who has written a book on jihadist dynamics in the Syria conflict, the truce "was a test of exactly how much" the Nusra Front would succeed in casting itself as a political force and a heavyweight in the conflict.

The Nusra Front, or Jabhat al-Nusra as it is known in Arabic, emerged in Syria in 2012, when the country's civil war was already in full swing, quickly establishing itself as the local power in scores of towns and villages in the country's north. But its battlefield strength waned in the face of the rival ISIS, which captured almost a third of Syria and neighboring Iraq when it blitzed across the region in the summer of 2014, and a myriad of other militant and rebel factions that took hold in the war-ravaged country.

ISIS, too, appears to be suffering at present.

In the town of Maaret al-Numan, the Nusra Front has resorted to force against residents on several occasions.

On March 4, Nusra Front members and supporters attacked a peaceful anti-government march, detaining several protesters. A week later, militants on motorbikes stormed another protest, beating up demonstrators and snatching away their three-color flags symbolizing the 2011 Syrian uprising against Assad.

Then, on Saturday, the militants swept through the town again, this time capturing and detaining fighters from the popular 13th Division of the rebel Free Syrian Army.

The townspeople had had enough.

On Monday, a throng swarmed a Nusra Front building, tearing down the black-and-white Islamic banner from its facade. Protesters later torched an empty "security office" belonging to the Nusra Front.

A town activist, who declined to give his name fearing for his life, said eight people from Maaret al-Numan and nearby areas have been killed. "The people say the Nusra Front is to blame," he said.

To justify its attack on the rebel 13th Division, the al Qaeda branch spread rumors, said another town activist who now lives in Turkey.

One rumor was that rebel Col. Tayseer al-Samahee had stepped on a Nusra Front banner during a recent protest in Maaret al-Numan, he said. Another was that a rebel had raped the wife of Nusra Front member Abu Ishaq, said the activist, speaking on condition of anonymity for fear for family members who still live in the town.

After the rumor spread, scores of Nusra Front fighters drove into the town from the nearby Jabal al-Zawiya area to try and crush the rebels' 13th Division, he said.

The division gained wide support among Syrians when it pulled out of residential areas after the Russian airstrikes' campaign began on Sept. 30, in an effort to spare the civilian population from being targeted.

The Nusra Front pulled out of some areas but kept a presence in others, which were hit in airstrikes, angering locals, activist say.

"Their presence gives justification to the (Syrian) regime and the Russians to bomb them," said Ahmad, another activist who declined to give his last name, also in fear for his life.

The Nusra Front "appears to have overstepped ... provoking a genuinely popular backlash against its increasingly domineering role in the conflict," Lister said in an article for the Washington-based Middle East Institute.

But despite being excluded from the cease-fire and the Geneva talks, the Nusra Front's recent actions have shown it will not be easily dislodged from Syria. It is deeply embedded in the armed opposition to Assad, and it holds sway over other rebel groups.

The Nusra Front has thousands of battle-hardened, mostly Syrian fighters, and controls wide areas in Idlib province as well as other areas around Syria. They also have strong allies, such as the jihadi Jund al-Aqsa group.

But there are signs of new rifts, including with the powerful Islamic rebel group known as Ahrar al-Sham, which is becoming increasingly distanced from the Nusra Front.

Capt. Islam Alloush, of another powerful Islamic group known as Army of Islam, which is taking part in the Geneva talks, said meetings are underway to form "an armed umbrella that includes all revolutionary forces in Syria." He hinted that the Nusra Front is not going to be part of the umbrella.

Analysts caution not to expect significant side-lining of the Nusra Front.

"If the cease-fire takes hold and the diplomatic process takes hold, then you might see some shifts," said Fawaz Gerges, a scholar on Islamic groups who has been following the Syria conflict from the London School of Economics.

A major factor in favor of the Syrian al Qaeda branch remaining relevant is its track record as an indispensable ally against Syrian government forces. Its allies-of-convenience are not going to give up the group unless they are given assurances Assad's government will not squash them once the Nusra Front is pushed out.

"To expect a major rupture is wishful thinking," said Gerges.