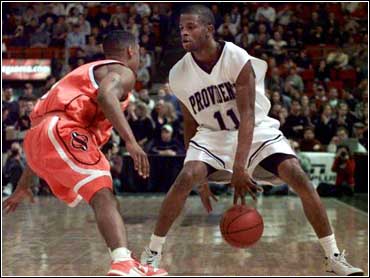 The fourth-ranked Orangemen set school records for free throws made and attempted Saturday night in a 74-58 victory over Providence, one that kept them the only unbeaten team in Division I.

Etan Thomas had 19 points and 14 rebounds for Syracuse (19-0, 9-0 Big East) in the game that seemed to be stopped by a whistle every few seconds..

"When you don't make shots you have to find another way to win. We hung in there and Etan had a good game inside," Syracuse coach Jim Boeheim said. "Our defense was active. We didn't give them anything easy. You have to find a way to win these games and we did."

Thomas, who was saddled with early foul trouble, had 12 points in the second half, including six free throws. He finished 9-of-14 from the line.

"That was a lot of free throws," Thomas said. "It was a real chippy type game the whole night. When one aspect isn't working you have to find another."

"We have a ton of difficult games ahead of us," Boeheim said. "There are a lot of tests left on the schedule."

The loss was the eighth straight for the Friars, their longest streak since losing 12 in a row in 1948-49.

"It's not easy. I'm trying to hold my character high and keep the kids pumped up," Providence coach Tim Welsh said. "My insides and outside are a lot different but you can't feel sorry for yourself or you're going in the wrong direction."

The teams combined for 50 fouls, 31 called on Providence.

"Fifty-one free throws was because they're an aggressive team. Period. End."