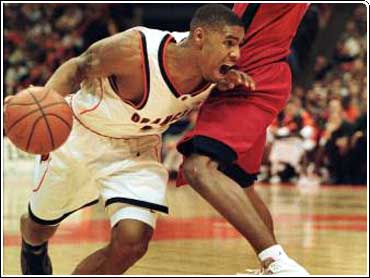 St. John's did exactly what it wanted to do Monday night against No. 4 Syracuse. The Red Storm just didn't do it long enough.

Leading most of the game and threatening to end the Orangemen's unbeaten season, St. John's fizzled again in the closing minutes and Syracuse escaped with a 63-57 victory to remain the only undefeated team in Division I.

Playing with four fouls, Jason Hart hit a clutch 3-pointer from the right corner to forge a 54-54 tie with 3:27 left, then used a great pass to stun the Red Storm.

"We have a lot of confidence. We didn't get to 18 (wins in a row) without any confidence," said Hart, who had 12 points and five assists. "Whether we're down or up, we have a will to pull the game out."

Hart then thwarted a St. John's press, finding Damone Brown all alone under the basket for the go-ahead layup. Brown, who was fouled on the play, converted the free throw for a 59-56 lead with 1:58 to to.

"It (the press) needed to have all five people in the right place, and unfortunately one wasn't and he made a great pass," St. John's coach Mike Jarvis said. "I don't know how he saw him, but he did. It took both people to make the play, and they both made the play. It was a great play at a great time. That's what great teams do."

It seemed like St. John's would end the winning streak when Anthony Glover converted a three-point play to put the Red Storm up 54-49 with 5:23 left. They had double-teamed Syracuse center Etan Thomas all night, preventing the Orangemen (18-0, 8-0 Big East) from taking advantage of his strong inside game.

"We were in great position to win the game," said Erick Barkley, who had 12 points, five assists and no turnovers. "We were right there It's just going to take a little bit more effort in the last five minutes to really put a team away. I thought we had the experience, but I guess not."

The Red Storm (13-6, 5-3 Big East) gave Syracuse fits all night, using their crisp passing attack to befuddle the Orangemen and sneak past Thomas several times for easy baskets in close.

But Syracuse, which went nearly eight minutes in the second half without a basket, rallied for only its second really close victory of the season. South Carolina took the Orangemen to overtime before losing 77-74 in mid-January.

"It came down to couple of big plays," Syracuse coach Jim Boeheim said. "We didn't have it tonight. They were very patient the whole game. We just had to hang in there."

Bootsy Thornton's jumper in close over the outstretched arms of Brown gave St. John's a 56-54 lead with 3:10 left, but that was the Red Storm's last field goal of the game as the Orangemen used their tough zone defense to shut down St. John's the rest of the way.

A week ago, Ohio State closed its win over St. John's with an 11-0 run, while Notre Dame finished its victory last Saturday with a 17-2 run. Syracuse closed this game with a 20-8 run.

"You have to learn how to finish," Jarvis lamented. "We just haven't learned how to do that yet."

Brown and Williams each had 12 points, while Thomas had eight points, 11 rebounds and six blocks.

Thornton, who fouled out, led St. John's with 13 points, while Glover had 12 and Lavor Postell added 11.

St. John's shot 47.3 percent for the game (26-for-55) and might have come out on top if not for some awful foul shooting (2-for-9). Barkley missed four free throws and Glover missed two more when the Red Storm were clinging to a slim lead before Hart turned the game around.

"We were this close," Red Storm guard Chudney Gray said, holding up two fingers an inch apart. "Everyone wanted to win this game due to the loss at Notre Dame. We really wanted to come in here and more than anything prove to ourselves that we could play, that we're a team, that we could do all the little things to help us win. We weren't able to get over the hump tonight."