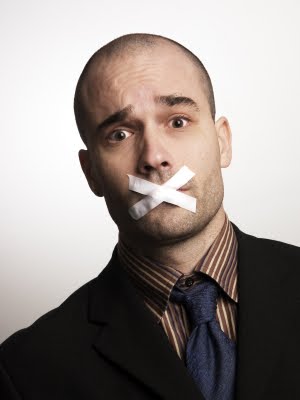 Dear Evil HR Lady, I have a new high level employee (Development Director) who does awesome work, is well-liked, but also uses "colorful" language. He is good to watch himself around clients, and around the youth we serve, but lets an occasional bomb drop in front of "junior staff" (college age), which people have said is unacceptable and inappropriate. Your thoughts? I'll reveal my preferences right at the start. I don't swear. In fact, the only time you'll hear me saying even a slightly off color word is when I'm reading a scripture out loud that refers to eternal consequences for bad people.

I realize I'm an exception. However, I have never heard anyone say, "Gee, I just love Bill's foul mouth." Someone will argue that using swear words just shows who they really are and if you tell them to stop it, you're suppressing their personality and creativity. I say any 13 year old can say dirty words and if you want to demonstrate your individuality and creativity, try saying something different.

What advantage is there to swearing? Well, it's easy and everyone knows you're really upset. The disadvantage? It demonstrates you aren't capable of coming up with actual words to describe your opinions.

But, if it was just an occasional bad word, I wouldn't say anything. I've worked with lots of swearers and I never said anything to them about it. It usually took about a week before they would start apologizing to me for saying bad words, and then they'd cease it around me. Perhaps it's my evil eye, but I think they just noticed that I don't do that.

If it's more frequent then that, I would pull your employee aside and say, "Hey, Bill. I realize you don't swear around our clients or the youth we serve, but if you could clean up your language in the office, I'd really appreciate it." If he objects, you can always point out that you know that he has the self control to not let something slip, but not all the employees do, and you need to make it a rule across the board. Of course, you have to set the standard for everyone and keep it the same across your organization. If Bill can't swear, neither can you.

I will make an exception for pain responses. After all, the Mythbusters confirmed that swearing helps you to tolerate pain. So, no getting mad at people when they smash their fingers in the door and let bad words fly.

Now, if this is not just a bad word here and there, but full fledged abusive screaming, then the problem isn't the words coming out of his mouth, it's the behavior. I don't think that's your problem, but if it is, I've written about dealing with rageaholics previously.

What you don't want to do is ruin the good work ethic and good relationship you have with this employee over a minor issues. Set a good example and use low key reminders. I know people have had success with requiring people to add a quarter to a swear jar, with the proceeds then used for a good cause. But, mostly, have high standards yourself and people will follow.