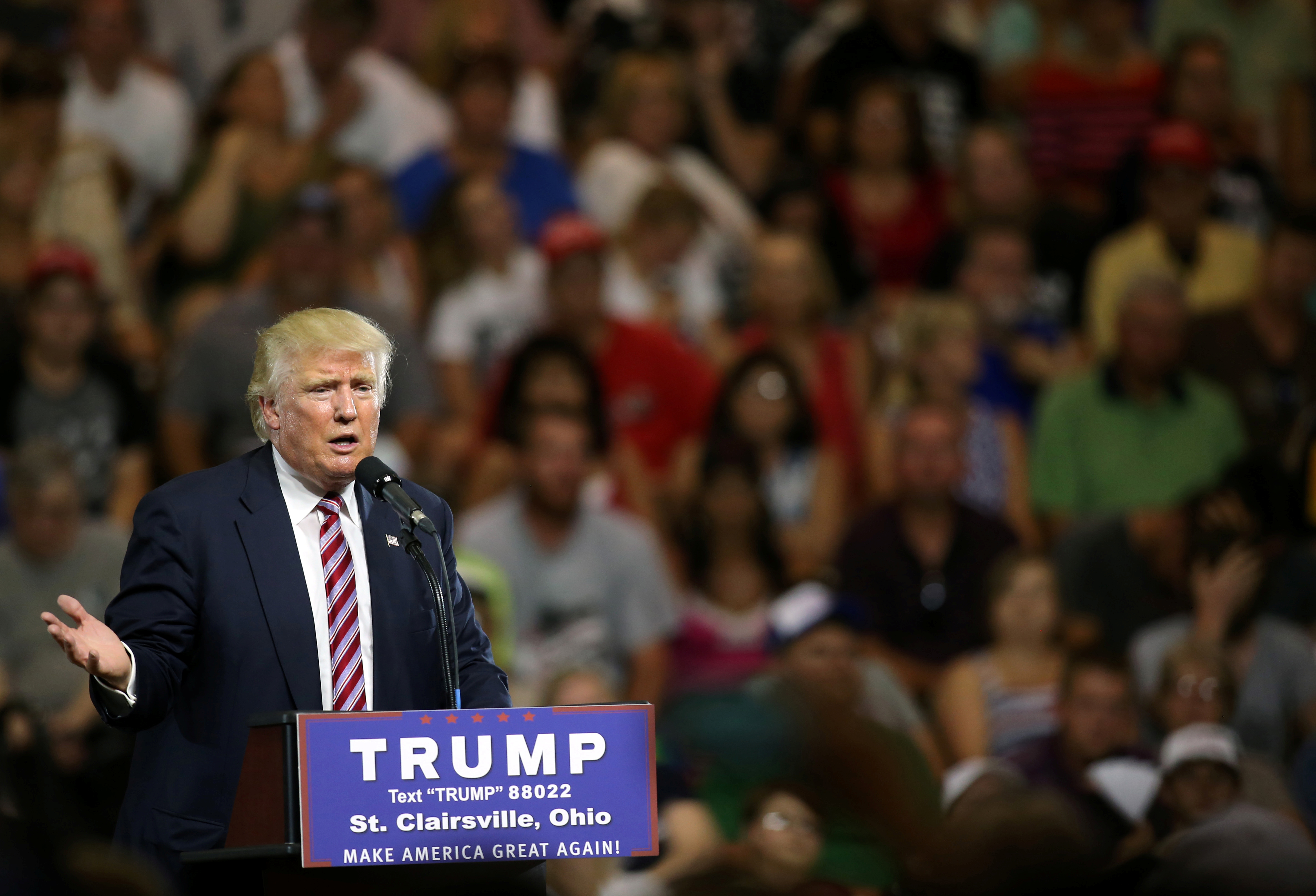 For vulnerable Republican Senators hoping to hold onto their seats in November, an already challenging year is now even tougher because of one person: Donald Trump.

The presumptive GOP nominee's historically low approval ratings and frequent controversial statements have Washington Republicans worried that Trump could jeopardize their control of the Senate -- and GOP incumbents in blue- and purple-state Senate races looking to create distance, however possible, with the business mogul.

Whether it's "supporting" but not "endorsing," or vowing to back the nominee while offering up criticism of his message or positions on certain issues, GOP Senators on the ballot this fall are struggling to figure out how to avoid getting relentlessly tied to Trump in their own competitive races.

Here are some of the senators who continue to grapple with Trump at the top of the ticket and how they're trying to stay afloat in a year when Democrats are devoting major resources toward taking back the Senate.

Kirk, who is locked in a tight race against Democrat Rep. Tammy Duckworth, is widely believed to be the most vulnerable of the 2016 Senate incumbents. The first-term incumbent rode the Republican wave of 2010 into office, a rare Republican pickup in a state as reliably blue as Illinois.

He endorsed Trump in May but rescinded that support when Trump suggested that Judge Gonzalo Curiel, who was handling a lawsuit over Trump University, might be biased against him because of his Mexican heritage.

"Trump's latest statements, in context with past attacks on Hispanics, women and the disabled like me, make it certain that I cannot and will not support my party's nominee for president regardless of the political impact on my candidacy or the Republican Party," the Illinois senator said in a statement at the time.

He didn't stick to just a strongly-worded statement: in a 30-second ad denouncing Trump called "Even More," Kirk explicitly touted his opposition to Trump and emphasized his moderate positions, including his support of President Obama's Supreme Court nominee Merrick Garland and his advocacy for abortion rights.

The ad also includes a clip of the wheelchair-bound Kirk, who suffered a massive stroke in 2012, being helped move up the Senate steps by Vice President Joe Biden and Democratic Sen. Joe Manchin.

Charles Franklin, a professor of law and public policy at Marquette University, says Kirk is right to look for a "clean separation" between himself and Trump.

"I think for those in states where they can politically afford to abandon Trump...the clean separation helps them differentiate themselves," Franklin told CBS News. "I think there is an advantage to that clean separation where it's possible. But it's not possible in every state."

Johnson, also elected in 2010, is another top target for national Democrats hoping to take back their Senate majority in November. Even without Trump, he had an uphill battle: a Marquette poll in June found only 31 percent of registered Wisconsin voters view Johnson favorably.

The incumbent senator, also the Chairman of the Homeland Security and Governmental Affairs Committee, is running against former Democratic Sen. Russ Feingold, who is viewed favorably by 40 percent of state voters. The RealClearPolitics polling average gives an almost 10-point lead across the board for Feingold in the state, where Trump lost to Cruz in the Republican presidential primary.

And like Kirk, Johnson too has been openly critical of Trump: in June, he asked Trump to renounce his comments accusing Judge Curiel of racial bias. Johnson has also spoken out against the presumptive GOP nominee's proposed ban on Muslim immigration to the U.S.

"The suburban counties around Milwaukee, which are very Republican in general elections and voted heavily for Ted Cruz in the primary have not come home to Donald Trump yet," said Franklin, the Marquette professor. "That's a major disadvantage to Johnson because if it lowers overall Republican turnout, clearly he gets no votes at all from any Republican that stays home because they're disappointed in Donald Trump."

In an interview with CNN, Sen. Johnson retracted his previous assertion, made in May, that he was "going to certainly" endorse Trump. Instead, he only offered general support for the party nominee, echoing divisions among Wisconsin Republican voters.

"To me, 'endorsement' is a big embrace," Johnson said. "It basically shows that I pretty well agree with an individual on almost everything. That's not necessarily going to be the case with our nominee."

Pressed in June on whether he'd take the step forward in fully endorsing Trump, Johnson again repeated that he'll back Trump in certain ways but indicated he'd stop short of a full endorsement.

The Republican statesman and senior senator from Arizona has served five terms in the U.S. Senate--and has admitted himself, albeit privately, that 2016 could be his toughest reelection battle yet.

While Arizona has still remained in the Republican column in recent presidential elections, a growing Latino population is giving Democrats reason to hope there--and McCain has a solid challenger in Democratic Rep. Ann Kirkpatrick. The current RealClearPolitics polling average gives McCain a 5.5 percent lead over Kirkpatrick.

(That's not to mention his primary battle, which McCain is expected to win but which keeps him from focusing fully on Kirkpatrick and the general election.)

McCain has been a consistent supporter of the GOP presidential nominee despite Trump's controversial assertion in 2015 that Sen. McCain is only a war hero because he "got captured."

In a May CNN interview on "Face the Nation," McCain called Trump a "capable" leader, and he chastised his Republican colleagues hesitant of supporting him, labeling them as "out of step."

Though McCain supports Trump's presidential run, his views on Trump are considerably mixed when it comes to his own Senate race. McCain has expressed worry about how Trump's hard-line immigration stances might affect Latino voter turnout in Arizona. That might be why McCain plans to skip the Republican National Convention in Cleveland next week.

In a May audio recording from Politico, McCain during a fundraiser said, "If Donald Trump is at the top of the ticket, here in Arizona, with over 30 percent of the vote being the Hispanic vote, no doubt that this may be the race of my life."

"In Arizona, Trump has a good deal of support among Republican voters...So McCain does not want to alienate Republican voters who support Trump," said Barbara Norrander, a professor at the University of Arizona's School of Government and Public Policy.

"Here it may depend on how successfully Democrats are able to link Republican candidates to Trump," Norrander said. "But Trump may be such a distinctive personality that voters in Arizona may separate the presidential vote from their other votes."

Ayotte is facing an uphill battle in her race against Maggie Hassan, New Hampshire's popular governor.

Like McCain and many other senators running for reelection, Ayotte has said she will not attend the Republican National Convention. But her response to Trump's rise has been awkward. The day after Trump's primary win in Indiana on May 3, Ayotte's spokeswoman, Liz Johnson, ended the senator's silence on Trump.

"As she's said from the beginning, Kelly plans to support the nominee," Johnson said to WMUR, avoiding a full-blown official endorsement.

In a statement to WMUR, Ayotte said, "His comments are offensive and wrong, and he should retract them."

According to the Manchester TV station, Ayotte was "nowhere to be found" during Trump's political rally in Manchester on June 13.

"So Sen. Ayotte has taken the position that she'll support the nominee, but she is not endorsing Donald Trump," Chris Galdieri, a politics professor at St. Anselm's college, told CBS News. "I think what she's trying to do over here is split the difference to not outright endorse Trump but also not denounce him completely or un-endorse him."

According to a Quinnipiac poll from May, Rubio, who only recently said he would run for reelection, is not viewed favorably in his home state: He is approved by 42 percent of Florida voters and is disapproved by 49 percent. In Florida's Republican presidential primary, he lost every county in the state to Trump, minus Miami-Dade, pushing him out of the race.

But Rubio is still a talented politician, despite whatever damage his presidential campaign did to his reelection prospects. Plus, Rubio has the benefit of a late Democratic primary choosing his opponent, which will be either the eccentric and scandal-tarred Rep. Alan Grayson, or Rep. Patrick Murphy, a one-time rising star who has had issues of his own.

The big question for Rubio is whether Trump, who according to most recent Quinnipiac polling barely leads Clinton, might weigh him down. The two sparred plenty in the primary, with Rubio going so far as to try his own hand at the mogul's trademark insults. Now Rubio says he's supporting Trump, albeit with plenty of reservations.

In a later June 26 interview on CBS News' "Face the Nation," John Dickerson asked the senator if the GOP had regrets about nominating Donald Trump.

"In this campaign season, the issues that underpin the conservative movement were not necessarily what was determining the outcome of this election," Rubio replied.

Rubio later said in the interview that Trump has managed to fragment and divide the party. He also reiterated the importance of Republicans' keeping control of the Senate.

"We have three branches of government here," he said. "I want to make sure that we have people in the Senate that will act as a check and balance on the president no matter who's elected."

But Rubio's foray into presidential politics may still haunt him come November.

"I think his presidential campaign was probably a net negative for his career," said Joseph Uscinski, an associate political science professor at University of Miami.