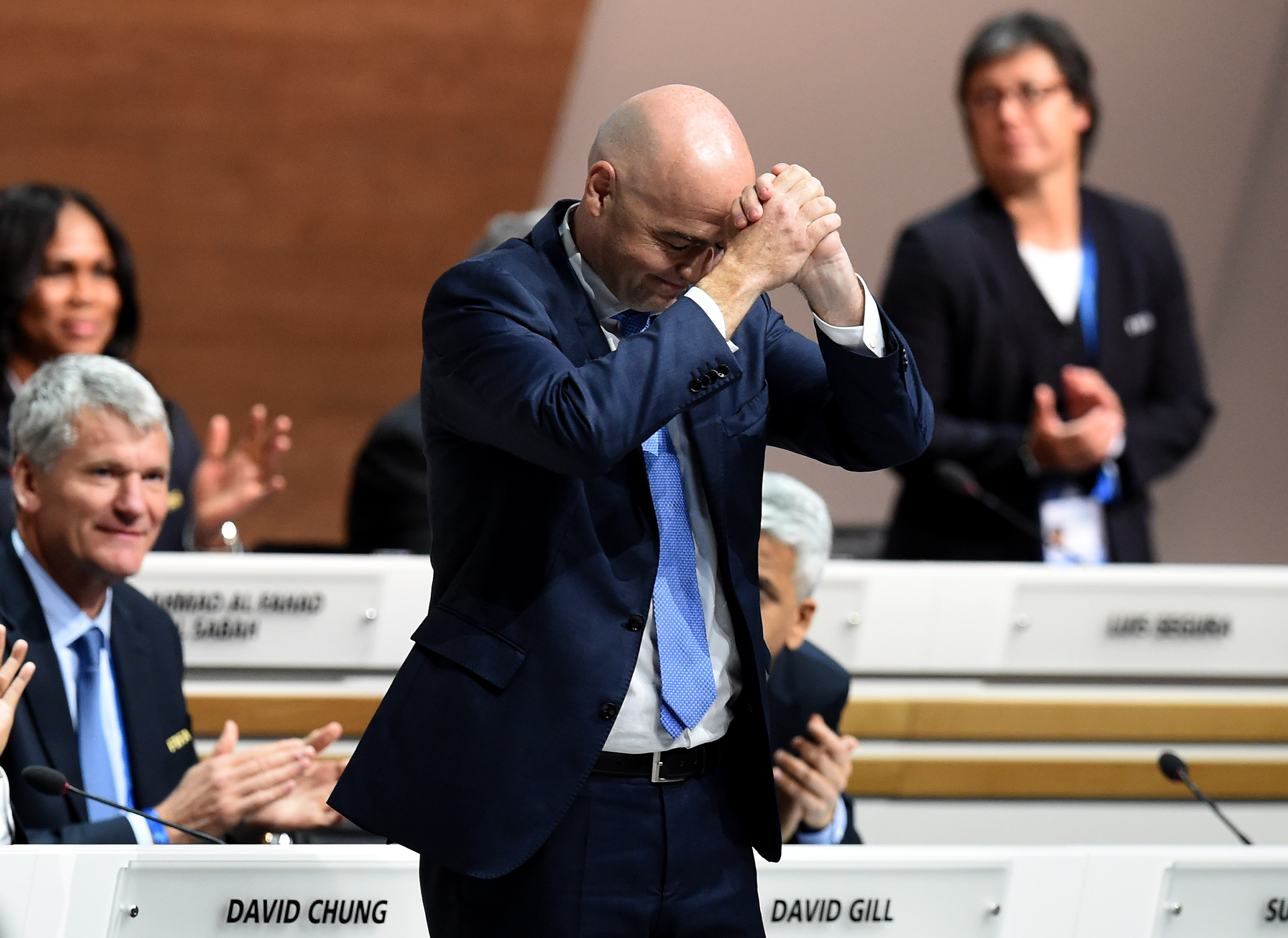 ZURICH -- Gianni Infantino pulled off a stunning victory Friday to take over as FIFA president.

The Swiss official received 115 of the 207 eligible votes in the second round to earn a decisive majority over Sheikh Salman of Bahrain, who had been the strong favorite entering the election.

The 45-year-old former lawyer saluted voters by patting his right hand over his heart, and had to compose himself before starting his acceptance speech.

"We will restore the image of FIFA and the respect of FIFA. And everyone in the world will applaud us," Infantino said, referring to bribery and corruption investigations that have rocked soccer's governing body and forced Sepp Blatter out of office after more than 17 years as president.

Sheikh Salman received 88 votes after being the front-runner during much of the four-month campaign. Prince Ali of Jordan had four votes, and Jerome Champagne of France got zero.

In the first round, Infantino surprising led with 88 votes. Sheikh Salman had 85 votes, Prince Ali 27, and Champagne seven.

Infantino, the general secretary of European governing body UEFA, is the second straight FIFA president from the Valais region in the Swiss Alps. Infantino is from Brig and replaces the 79-year-old Blatter, who was born in neighboring Visp.

Infantino will be president through May 2019, completing the remainder of Blatter's term.

Blatter was forced out by the pressure of American and Swiss investigations of corruption that hit FIFA two days before the previous election in May.

"I congratulate Gianni Infantino sincerely and warmly on his election as the new president," Blatter said in a statement. "With his experience, expertise, strategic and diplomatic skills he has all the qualities to continue my work and to stabilize FIFA again."

There were only four candidates on Friday's ballot after Tokyo Sexwale withdrew during his campaign speech to voters, and all four went forward to the second round.

Not since 1974 has a second-round vote been held in a FIFA presidential election. Then, Joao Havelange of Brazil beat 13-year incumbent Stanley Rous of England 68-52 after an initial 62-56 ballot in Frankfurt, Germany.

Infantino exceeded most observers' expectations after an impressive 15-minute pitch, only 20 minutes before first-round voting began.

The Swiss-Italian spoke in several languages without notes and portrayed himself as a leader for the world, not just his own wealthy confederation.

"We have to get Europe to do much more," Infantino said.

Sheikh Salman was expected to lead the first round with backing from Africa and the Asian soccer confederation he has led since 2013.

Still, he had been the most criticized and scrutinized candidate throughout the four-month campaign. The issue of Bahrain's human rights record was often cited by Gulf activists but had not seemed to seriously trouble voters outside Europe.

Sheikh Salman has strongly denied claims about his role in the Arab Spring protests of 2011 when he was Bahrain's soccer federation president.

Infantino takes over a wealthy but vulnerable soccer body whose image and confidence has been shattered by escalating scandals.

Blatter was re-elected for a fifth term in May but bowed to pressure four days later and announced he would resign. Blatter was subsequently banned for six years for financial mismanagement and was absent Friday after 40 years as a fixture at FIFA meetings.

Before electing FIFA's first new president since 1998, 87 percent of the 207 voting federations passed wide-ranging reforms to protect against corruption and curb the powers of its new president.

Those include preventing presidents from serving more than three four-year terms, reducing their powers and guaranteeing more independent oversight for FIFA's decision-making and spending. The executive committee will be renamed the FIFA Council with more female members while there will be stricter integrity checks will also control top officials.

FIFA and its lawyers hope the reform will help show U.S. prosecutors the soccer body is serious about changing its culture, and protect its status as a victim in the American investigation. A total of 41 people and marketing agencies have been indicted or made guilty pleas, and Blatter is a target.

Still, the new era FIFA hopes for will not easily escape the fallout from Blatter's scandal-hit leadership.