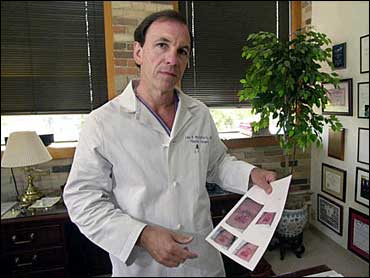 "Nip/Tuck" may be a hit with audiences, but the new FX drama that grapples with the ugly side of the make-me-beautiful business has plastic surgeons sharpening their scalpels.

Dr. Leo McCafferty, a Pittsburgh plastic surgeon and chair of the American Society for Aesthetic Plastic Surgery's public education committee, said that while most viewers probably take the show about two Miami plastic surgeons as entertainment, many people don't fully understand the specialty.

"I think there is the tendency to think all we do is stretch skin. People generally don't associate us with the burn victim or accident victim in the middle of the night," said McCafferty, who said he decided to specialize in plastic surgery while in medical school after watching a mentor repair a cleft lip.

"The specialty is a medical specialty that deals with real medical issues. We concentrate both on fixing the abnormal and the unhappy normal," McCafferty said.

"We're physicians first. We all have the same training. We all take the Hippocratic oath, like the oncologist, like the surgeon," said Rohrich, who is also chairman of plastic surgery at University of Texas Southwestern Medical Center in Dallas.

Rohrich said the suburban Chicago-based American Society of Plastic Surgeons was sent an advance script, but after reading it, wanted no part in the show.

"The whole show is about two guys who are turning 40 and having mid-life crises and are doing absolutely the worst behaviors," Murphy said. "They are men before they are doctors."

The fictional surgeons do have ethical lapses, he said, but they also do good. In one episode, a transvestite is given a free sex-change operation.

The show also looks at "reasons in our culture people feel so terrible about themselves," Murphy said.

The show, which airs Tuesdays at 10 p.m. EDT, was the 11th-ranked cable show for the week of Aug. 4-10, according to Nielsen Media Research.

Both cosmetic surgery associations, however, have denounced it. The 5,000-member American Society of Plastic Surgeons, which includes both cosmetic and reconstructive plastic surgeons, called it "sensational, bordering on the absurd."

"There's no realism in it at all, from beginning to end," Rohrich said Monday, between a facelift and a breast augmentation.

The 2,100-member American Society for Aesthetic Plastic Surgery, whose members specialize in cosmetic surgery, said the show "does a disservice to millions of patients who benefit from cosmetic procedures."

McCafferty and Rohrich said that while there are some doctors who cross ethical lines and become involved with their patients, the show makes it appear that's the norm.

"I think about 20 patients have talked to me about how despicable it was and how deplorable — but of course, they watched," Rohrich said.

"The stuff we do is not frivolous. It's well thought-out," McCafferty said.

"Eighty, 90 percent of my patients want to look like a younger version of themselves," he said.

According to the American Society of Plastic Surgeons, some 6.6 million people had cosmetic plastic surgery in 2002, down 12 percent from 2001. The most popular procedures are nose reshaping, liposuction, breast augmentation, eyelid surgery and facelifts. Women have about 88 percent of all cosmetic surgeries.

The most popular non-surgical cosmetic procedure was Botox injections, with some 1.1 million people having the procedure last year.