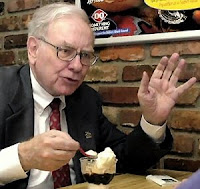 Throughout this ongoing economic crisis, the hardcore anti-bailout crowd crows that everything can be fixed if we just act more like multi-billionaire Warren Buffett.

Apparently, Buffett sees gold where others envision only muck. So the "Oracle of Omaha" is digging deep--but not too deep, mind you--to acquire ownership stakes in a couple of venerable but wobbly institutions, namely GE and Goldman Sachs.
Some view his buying spree as proof-positive that there's gobs of hearty, private investors out there ready to buy, buy, buy into these sagging financial institutions. Just hang tight, they argue on CNBC and other outlets, because the private investor cavalry will save the day, allowing taxpayers to hang onto the $700 billion required to get the federal economic bailout (sorry, rescue plan) up and running.

I wish that were true. But it isn't. In fact, the shrewd yet homespun Buffett is probably counting on the bailout more than most of us.

By investing at least $5 billion in Goldman Sachs, Buffett is betting a bailout will become law and that the U.S. Treasury will get moving and buy much of the toxic commercial paper on the books of Goldman and many other financial institutions. Free of such nasty and corrosive investments, Goldman's balance sheet should quickly perk up. With Buffett's backing, Goldman is free to pursue its new strategy of being a bank holding company, while continuing to sell fee-generating investment banking services.

Same goes for GE. Buffett expects the bailout to ease the lending burdens of GE's financial unit.It will also alleviate much of the credit crunch, which should free up financing that will make it easier for GE's customers to purchase its goods and services.

Don't kid yourself, Buffett knows the score. That's why he favors a bailout!
Believe me, without the distinct possibility of a taxpayer rescue, Buffett doesn't go anywhere near Goldman, GE or anything else. Remember, he's the fellow that recently stopped one of his insurance firm's subsidiaries from insuring bank deposits above the amount guaranteed by the federal government.

And keep in mind that Buffett is only the best-known of a small band of wealthy investors plunking down cash and waiting for bailout relief. Scores of other well-heeled interests are making the same play. But those who argue that private investment alone is enough to fix this mess can't see past their ideology.

Nope, private investors are buying some well-known brand names -- JP Morgan Chase and Morgan Stanley, for starters--in anticipation of a government-led bailout, not because of some ardent belief in the free enterprise system. This is a painful time and we need public and private capital to save the economy from ruin. But let's be honest: Warren Buffett can't do it all by himself.