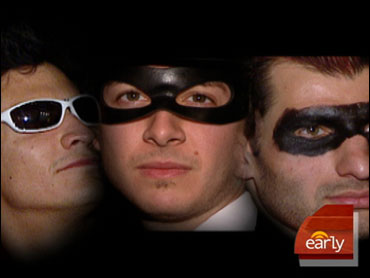 In closets around the world, their tights and capes are tucked away. They have day jobs and lives, but when night comes, they become...Dark Guardian! Life! Civitron! Citizen Prime! And many other superhero identities.

These people are average citizens-turned-crime fighters, regularly suiting up to do good deeds. CBS News correspondent Michelle Miller reported on The Early Show Thursday that there may be as many as 200 superheroes keeping watch in communities everywhere.

And they're taking on crime right where it lives.

And though they don't carry a badge, they are getting recognition for their work. Miller reported a superhero who calls himself Master Legend has been credited by police for rescuing people after Hurricane Charlie, and two other superheroes in England are being celebrated for defending two police officers under attack.

But these superheroes aren't just taking down people they think are bad guys, they're also doing outreach, such as feeding the homeless. And the superhero community is getting organized through New York-based initiative, Superheroes Anonymous, which documents the real-life superhero phenomenon.

Other superheroes are reaching out to children. One such superhero, Citizen Prime, joined The Early Show on Thursday.

Citizen Prime, an executive at a financial institution, said he's giving back through outreach at schools. He works with Kid Heroes, performing with a team that teaches children about bullying, emergencies, encouragement and helping friends.

Citizen Prime, like many superheroes, said he keeps his professional life separate from his superhero life.

"I don't have a secret identity per se, but I do have an alter ego," he said. "...I think what Citizen Prime really represents is that hero inside all of us. When you find out who I am, it's a whole lot less interesting than Citizen Prime."

But do they really need the costume?

"It's a way for me to be loud, to be something more, something super - and hopefully get the attention of people around me," Civitron told Miller.

And they do get attention -- some good, some bad.

"I've been threatened," Dark Guardian told Miller. "People have put a gun on us, but I never back down."

The only defense they have is pepper spray and sometimes a bullet-proof vest. Police discourage their work, but they're still crusading for justice any way they can.

Dark Guardian said, "Somebody needs to stand up against the people who are doing wrong."