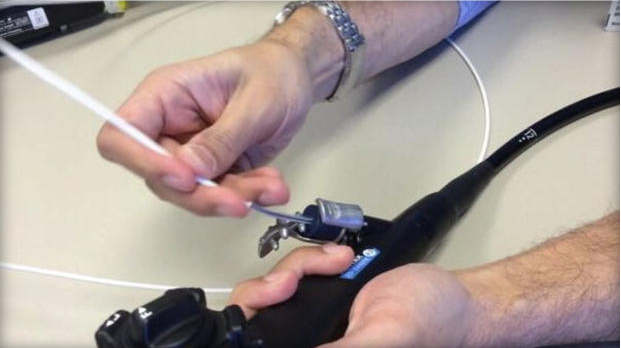 At least 250 people, mostly in the U.S., were sickened with life-threatening "superbug" infections linked to contaminated medical scopes in the past three years - more than previously estimated by federal regulators, according to a new Senate committee report released Wednesday.

The report found that at least 25 outbreaks of patient infections tied to the specialized devices called duodenoscopes sickened people in four countries and 10 U.S. states between 2012 and early 2015. It also says the Food and Drug Administration and the devices' manufacturer were slow to inform doctors, hospitals and the public about the risk - a 17-month delay that allowed the problem to persist.

Last year, the federal FDA reported that the medical devices from Olympus Corp. and other manufacturers were linked to 142 patient infections.

The latest report from the Senate Committee on Health, Education, Labor and Pensions was by commissioned Sen. Patty Murray, D-Washington, the committee's ranking member.

Murray called for the review last January following the outbreak of antibiotic-resistant infections tied to the medical devices at Virginia Mason Medical Center in Seattle. The devices were used to identify and treat conditions of the pancreas and bile duct.

At least 32 patients at Virginia Mason contracted infections in 2013 and at least 11 later died, though it's unclear whether those deaths were a direct result of the infections, the report said. The Seattle Times reported the number of cases there later grew to at least 39.

Patients were sickened by dangerous bacteria that remained on specialized scopes even after they were cleaned according to manufacturers' directions. The Seattle Times reported in April 2015 that the infections included carbapenem-resistant Enterobacteriaceae bacteria (CRE) and "two so-called hyper-AmpC cases, unusual strains of multidrug-resistant E. coli bacteria."

Huntington Memorial Hospital in Pasadena, California, was among the other hospitals that said some of its patients contracted the antibiotic-resistant "superbug" linked to the scope.

In August it notified public health authorities after several patients who had procedures using Olympus duodenoscopes were found to have the bacteria.

"Patients should be able to trust that the devices they need for treatment are safe and effective," Murray said in a statement.

The report recommends a number of legislative and regulatory changes. It urges Congress to require that unique device identifiers be included in insurance claims, electronic health records and device registries. It says the FDA should evaluate whether design modifications are needed and if so, require manufacturers to implement repairs through a phased recall.

"We appreciate the report from Sen. Murray and will carefully consider its recommendations, many of which FDA is already taking steps to address," FDA spokeswoman Deborah Kotz wrote in an email.

The report also found that at least 16 U.S. hospitals traced antibiotic-resistant infections directly to the devices, but the hospitals generally did not raise alarms about these infections with federal regulators.

The report said that by early 2013, Olympus, the manufacturer of 85 percent of the duodenoscopes used in the U.S., knew the scopes could harbor dangerous bacteria but didn't warn U.S. hospitals until early 2015.

Mark Miller, an Olympus spokesman, said in a statement posted on the company's website Wednesday that the firm cooperated with Murray's office and that the report recognized the need for regulators, hospitals and manufacturers to address infection risk.

"Although we do not agree with all of the report's conclusions, we are closely reviewing the recommendations in the report as part of Olympus' ongoing efforts to increase patient safety associated with use of Olympus duodenoscopes," Miller wrote.

Murray sought records from Olympus, Pentax Medical and Fujifilm Medical Systems to understand ongoing concerns about the scopes used in about 700,000 procedures a year in the U.S., often to avoid invasive surgery.

Gale Robinette, a Virginia Mason spokesperson, told the Seattle Times that hospital officials were eager to read the report.

"We will evaluate any guidance the report offers as an opportunity to further improve our processes. Patient safety and quality care are the highest priorities at Virginia Mason," Robinette said in an email.