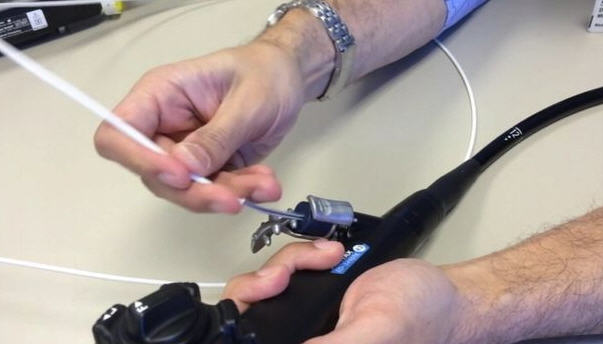 At least 35 patients fell ill and 11 died after contracting a superbug infection at a hospital in Seattle, Washington, according to a new report. The Seattle Times reports that dozens of patients at Virginia Mason Medical Center were infected with a drug-resistant bacteria known as carbapenem-resistant Enterobacteriaceae (CRE) between 2012 and 2014, a result of contact with contaminated endoscopes.

Hospital and public health officials in Seattle did not disclose to patients and their families the cause of the infection at the time of illness, the paper reports. However, health officials say it remains unclear what role the bacteria had, since most patients who underwent the procedure already were critically ill with colon or pancreatic cancer.

"We discovered a problem more than a year ago, we responded quickly to investigate potential causes, and we worked to fix the problem," the hospital said in a statement to CBS News. "The few patients who were affected by this bacteria received appropriate and timely medical treatment."

The specialized endoscopes -- known as a duodenoscopes -- are used to treat patients with pancreatic cancer and other gut illnesses. Hospital personnel say the devices were cleaned in compliance with the manufacturer's instructions but they still carried traces of the bacteria. The bacteria found on the endoscopes matched cultures taken from ill patients, according to officials investigating the case.

CRE is resistant to a majority of antibiotics and, on average, kills 50 percent of those infected.

Similar cases of patients contracting superbugs from contact with endoscopes have recently occurred in health facilities in Chicago and Pittsburgh.

The hospital says staff members have since adjusted the way this model of endoscope is cleaned, even though investigators found no breach in infection-control practices. Each device is held for 48 hours to make sure it's free of CRE and other dangerous bugs.

"We determined that the endoscope manufacturer's, as well as the federal government's, recommended guidelines for processing the scopes are inadequate," the hospital statement said. "This is a national problem. We've developed and implemented a better and more thorough process for preparing scopes that is the most rigorous in the nation. We believe our method for preparing endoscopes for medical procedures should now become the national standard."

Some experts are blaming the device's design for causing the infection. The end of scope contains "elevator wire channels," which are essentially small flaps that hold stents and other components of the device. These channels may harbor hidden bacteria that's difficult to thoroughly clean. Commenting on the case, the U.S. Centers for Disease Control and Prevention say the design "makes them difficult to clean with the potential for contamination persisting following reprocessing and subsequent transmission of pathogenic bacteria to patients."

The CDC has contacted the U.S. Food and Drug Administration about the case. However the FDA, the agency tasked with reviewing and approving all medical devices used in the U.S., has not yet issued a warning or recall for this particular model of endoscope.

A spokesperson for the FDA told the Seattle Times that the agency believes the infection rate from the device is very low, and it is critical for performing a life-saving procedure on as many 500,000 patients in the U.S. each year.

Dr. Michael Gluck, Virginia Mason's chief of medicine, said the hospital is joining forces with patient advocate groups to urge the FDA and manufacturers of duodenoscopes to change the design and make it easier to thoroughly clean.

Canada to throw out 13.6 million doses of AstraZeneca COVID-19 vaccine
Thanks for reading CBS NEWS.
Create your free account or log in
for more features.
View CBS News In
CBS News App Open
Chrome Safari Continue
Be the first to know
Get browser notifications for breaking news, live events, and exclusive reporting.