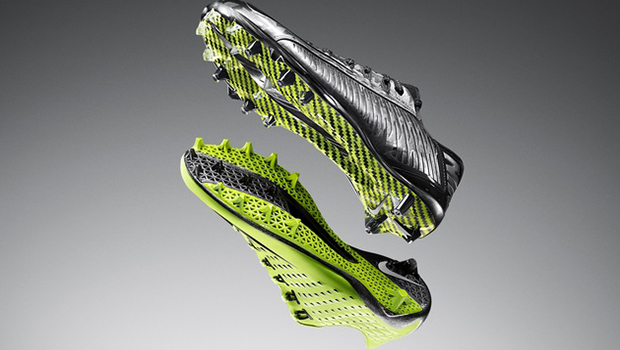 When the Seahawks and Broncos take the field for Super Bowl XLVIII, players on both sides will be wearing a cleat designed with 3D printing.

Nike turned to the high-tech tool to speed up the design process.

“With 3D printing you can have an idea, sketch it out, 3D model it, and by the next day you come to the office and you have a part,” Nike Director of Innovation Shane Kohatsu told CBS News.

The technology, he said, “really changes the pace that we get to work and it really changes how far we can go in a short amount of time. You can imagine how liberating that is for a designer.”

The project started when former Olympic sprinter and gold medalist Michael Johnson approached Nike about creating a new cleat. Johnson is now a speed training coach working with NFL players, and he wanted to give his athletes an edge.

The idea was to design shoes to optimize what's called the "Zero Step": the pivotal moment when propulsion and acceleration are determined. The cleat needed to reduce the fractions of an inch that the foot slips backwards when an athlete starts to sprint.

“Translated to the game of football, mastering the Zero Step can mean the difference between a defensive lineman sacking the quarterback or getting blocked,” Johnson said in a press release.

The Nike team used motion capture video technology to study Zero Step. Then, using 3D printers, or selective laser sintering technology (SLS), they created dozens of prototype cleat plates and spike shapes. Many of those shapes would not have been possible with traditional manufacturing, said Kohatsu.

Using the 3D printers drastically changed the pace of testing the prototypes. Kohatsu said it might have taken three years to complete this project using the traditional method of injection molding, which requires building molds, filling them with molten plastic, and waiting for them to set. Under that system it took months to make the slightest tweaks, because the entire process had to be repeated with each redesign.

With 3D printers, those tweaks can be done in hours.

After testing dozens of prototypes, Nike determined that shaping the spike like a shovel helps athletes dig in faster for the best performance at Zero Step.

Once they settled on the design, the cleat plate served as the prototype for the Super Bowl-ready shoe, the Vapor Carbon 2014 Elite Cleat.