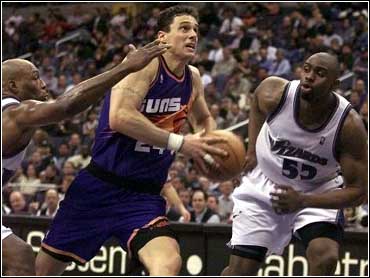 The Phoenix Suns didn't play their best game, but it was good enough to leave the Washington Wizards cursing at themselves.

The Suns quickly took charge with a 35-point first quarter, but scored only 57 in the last three periods. They moved the ball well at times, finishing with 21 assists, but also had 18 turnovers.

"It was not one of our better games in the string of wins, but a win is a win," Phoenix coach Scott Skiles said. "We have to execute better, move the ball better and make the open shot."

Gugliotta finished with 20 points, eight rebounds and three steals. He also did a good job defensively against Washington center Jahidi White, limiting him to 11 points despite being physically overmatched.

"On different nights, different guys step up," Gugliotta said. "Tonight, I had a lot of good opportunities, caught a lot of passes and was in a good position."

The Wizards looked flat throughout the game after a big win against Milwaukee, leaving coach Darrell Walker cursing his team's work.

"That was a bad effort," Walker said.

Rod Strickland, who sat for much of the fourth quarter and finished with only eight points and three assists in 27 minutes, agreed with the coach's assessment.

Gugliotta scored 10 points in the first quarter as the Suns shot 64 percent and opened a 35-19 lead that the Wizards never recovered from.

Kidshowed why he's one of the NBA's best in the final 90 seconds of the first quarter. Washington cut the lead to 27-17 before Kidd had three assists and a layup off a 3-on-1 fast break as the Suns took their 16-point lead.

Phoenix's offense sputtered in the second quarter, scoring just two baskets in the final 10 minutes as the Wizards pulled to 54-47 at halftime. Kidd and Penny Hardaway then sparked the offense in the second half as the Suns answered several Washington charges.

Mitch Richmond led the Wizards with 19 points but shot just 5-for-15 from the field.