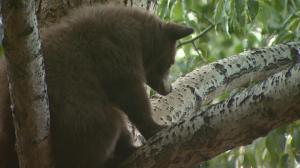 Colorado Parks and Wildlife had to kill more than 30 bears this summer after animals foraging for food ventured into various towns, according to Wildlife Manager Perry Will. Some were bears that had been relocated but returned and continued to cause problems.

Aspen police respond to nearly 20 reports every night of nuisance bears rummaging through dumpsters and the back doors of restaurants looking for easy meals.

"After they've been rewarded in a home, they know that there is food and rewards there and they get more aggressive and start breaking in," Will said.

"People want to think, 'Take them to the wilderness.' We hear that all the time. 'Take them out in the wilderness and turn them loose.' Well, we do do that, but that doesn't mean they live happily ever after," Will said.

Tourists visiting Aspen for the summer found more to see than mountains and changing leaves.

"Somebody told us about them at the hotel where we're staying, so we came wandering down to see them," visitor Anita Soares said of a mother bear and three cubs that were perched in a tree near restaurants and shops.

Soares joined hundreds of other tourists who stopped to look and take photos.

"They were here almost all night last night just kind of wandering up and down the mall doing their thing," Aspen Police Department Officer Adam Loudon said.

Poor crops are blamed for the deadly summer, and more bears could run into problems before hibernation.

"Oh, we'll have some more issues, no question," Will said. "We have them every day."

Game managers say only 2007 and 2009 had bigger droughts that were more damaging to the bear population. Conditions may improve as more winter-like weather sets in.