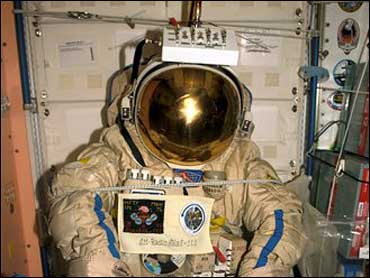 If there was an extraterrestrial watching, it might have called 911.

An unmanned spacesuit tumbled helplessly into space Friday after a cosmonaut untethered it from the international space station.

Mr. Smith is doomed, but Tokarev's act was far from sinister. The spacesuit was stuffed with old clothes and ham radio equipment that will send recorded messages to radio operators around the world before eventually re-entering Earth's atmosphere and burning up.

Complete with helmet and gloves, the spacesuit floated past the Russian section of the space station, 220 miles above Earth, before rotating away feet first and beginning its orbit around the globe.

The spacesuit project, known as SuitSat-1, was the brainchild of a Russian ham radio operator. It will send several words in code for schoolchildren listening on the ground. Radio operators will be able to pick up the messages by tuning into FM frequency 145.990 MHz.

Along with the radio transmitter, the stuffed spacesuit also has internal sensors to monitor temperature and battery power. As it floats along, it will transmit its temperature, battery power and the time it has been in space to the ground.

Students and others can also follow its progress on a NASA Web site. The suit was expected to pass over the U.S. between midnight and 4 a.m. according to NASA.

A third of the way into Friday's spacewalk, McArthur asked NASA's Johnson Space Center whether anyone had picked up signals from the spacesuit.

"We're hearing that Japan has been listening to Ivan Ivanovich," said NASA spacecraft communicator Mike Foale, who once wore the spacesuit during a 2004 spacewalk.

During the spacewalk, Tokarev and McArthur covered a wide swath of the 240-foot-wide, 140-foot-long station as they took on several chores. It was the fourth spacewalk for McArthur and the second for Tokarev.

The tasks included creating storage space, retrieving a Russian science experiment and photographing handrails, antennas and sensors to see how they have held up in space.

Their most difficult chore involved taking steps to protect an important cable connected to a transporter that moves a platform holding the station's robotic arm.

A twin cable that provides power, data and video to the mobile transporter was inadvertently cut in December. Mission managers wanted to make sure that did not happen to the remaining cable by having McArthur insert a bolt into a cable cutter device.

But McArthur had trouble tightening the bolt, so Tokarev instead tied the cable with a wire to a handrail out of the way of the cable cutter device. The cut cable will be repaired later, but in the meantime the transporter cannot move.

"It's disappointing that it didn't go exactly the way we wanted," McArthur said. "You know, that's just life in the big city."