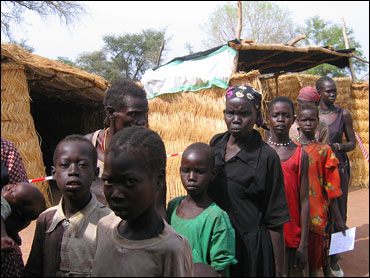 The U.S. and France have been prodding the council for quick action but opposition from members, including Sudanese allies China and Libya, have blocked attempts to reach an agreement behind closed doors.

In the wake of the International Criminal Court's ordering the arrest of President Omar al-Bashir on charges of war crimes and crimes against humanity in Darfur, France pressed the 15-nation council to issue a non-binding statement condemning the Sudanese government's decision to expel 6,500 relief workers from 13 of the largest aid groups - roughly 40 percent of the workers from non-governmental organizations that have operating in Sudan's war-torn Darfur region.

"This decision will have traumatic effects on the population," said Jean-Maurice Ripert, France's ambassador. "We are asking the Sudanese authorities to abide by their own commitments. ... They are going back on their own promises."

"There's a lot of concern around the council table about this decision," British Ambassador John Sawers said. "Meanwhile, efforts will continue to find a basis for the NGOs to stay on."

U.N. Secretary-General Ban Ki-moon said on Thursday that Sudan's expulsion of 13 major aid organizations will cause "irrevocable damage" to humanitarian operations in Darfur and called on the government to urgently reconsider its decision.

Council members received a private briefing on the crisis from Catherine Bragg, the U.N.'s deputy emergency relief coordinator, who said one of the refugee camps could run out of water by next week. The ICC judges had brushed aside concerns about inciting more violence and suffering in a nation where 300,000 have died in the five-year conflict between non-Arab rebels and the Arab-dominated government and militias and another 2.5 million have been uprooted.

Briefing reporters afterward, Bragg emphasized separating justice from relief work. "In the briefing I stressed that the humanitarian situation should be de-linked from any discussion of the ICC," Bragg said.

The U.N. human rights office, though, will examine whether Sudan's decision to expel aid groups constitutes a breach of basic human rights and possibly a war crime, a spokesman said Friday.

Rupert Colville said the Sudanese decision to expel relief workers constitutes a "grievous dereliction" of duty, putting the lives of thousands at risk.

Sudan is not a member of the Security Council, but counts among its allies China and Libya, which are members. China, which is Sudan's biggest arms supplier and also has invested heavily in its oil industry, is one of the council's five permanent members. Libya holds the revolving council presidency for March.

Libyan Ambassador Ibrahim Dabbashi said the ICC decision did not take into account the opposition by the Arab League and Africa Union to an indictment of al-Bashir and "what is good for the peace process."

Because of that, he said, the Security Council should use its power to defer the prosecution "as soon as possible to calm the situation."

The United States on Friday blasted Sudan's decision as threatening the lives of more than 2 million people already at risk of starvation and death.

"The United States is gravely concerned by the reckless decision of the Sudanese government to expel international aid groups working to ease the suffering of Sudan's citizens," U.S. Ambassador Susan Rice said.

"The humanitarian situation in the country is already dire, and this callous step threatens the lives of innocents already suffering from years of war and upheaval," she said. " Millions of civilians - including untold thousands of children and elderly people - will be left even more vulnerable to starvation, disease, despair, and death if the government of Sudan does not immediately change course."

Rice also said that it will be impossible for Sudan to make up for the loss in aid by other means, as it has suggested it could do, and that the groups' assets also have been seized, including their bank accounts, computers and vehicles.

Both the United States and Sudan have declined to join the ICC. But Sudan, as a member of the U.N., is obliged to cooperate with the court.

And while the United States does not believe it is legally obligated to arrest al-Bashir on behalf of the court, if it were to have the opportunity, the Obama administration has recently signaled that it finds the court less objectionable than the Bush administration had - and has issued strong statements that those who committed atrocities should be held accountable.

In that light, the United States has said it will not support any move to defer the ICC's arrest warrant, which the Security Council has the power to do since it authorized the investigation in Darfur in 2005 that led to the prosecution of al-Bashir.

"The delay or deferment of the ICC warrant is not something that the United States is looking at right now," State Department spokesman Gordon Duguid told reporters on Thursday.

More than 1 million of the two to three million that the World Food Program feeds each month in Darfur are dependent on deliveries from the groups that have been expelled. Another 1.5 million are dependent on medical care provided by those groups.

But Sudan has accused the groups such as CARE and Save the Children of cooperating with the court and giving false testimony.

"We have a full dossier of information against those organizations," said Sudan's Ambassador Abdalmahmood Abdalhaleem Mohamed, though he declined to provide details. "They are messing up everything as far as stability and security of Darfur is concerned. ... They are abusing the hospitality of the Sudanese people." The groups deny the accusations.

Under the Geneva Conventions it is illegal to intentionally starve people to death by blocking their access to food. The rule applies to international conflicts, but efforts have been made to incorporate it in customary international humanitarian law, which would carry weight in courts.