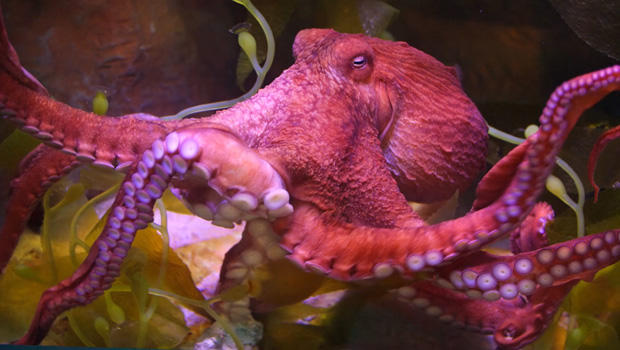 It's one of the most bizarre creatures on Earth, and not just because it looks so different. The octopus can camouflage itself in a flash; squeeze its entire body through a one-inch hole; and their brains?  That's right, an octopus has one large central brain, and eight mini-brains, one in each arm.

"Octopuses are so brilliant," said author and naturalist Sy Montgomery, who believes their intelligence is almost off the charts.

"We give 'em the same toys to play with that we give our children," Montgomery said. "They love to play. Play is one of those characteristics of higher minds."

Rudy, a giant Pacific octopus, and one of the stars of the New England Aquarium in Boston, seemed to want to play with us.

"In fact, they're portrayed in movies as aliens," said Reid.

"That's right, and as monsters."

Yes, Hollywood octopuses have torn down the Golden Gate Bridge, destroyed ships, and feasted on movie stars. Montgomery says it's unfair to demonize them: "You would really have to go to outer space to come up with someone more different from us than this. Their mouths are in their armpits; they have three hearts; they have blue blood. And the grace? I mean, who has grace like this?"

Montgomery spent countless hours studying these other-worldly beings while writing her book, "The Soul of an Octopus."

Reid asked, "Do you believe the octopus has a soul?"

"I believe if I've got a soul, this octopus has a soul," she replied.

And that, she claims, is not the only thing they have in common with humans.

"When I met an octopus for the first time, I was so struck by the fact that she was just as curious about me as I was about her," Montgomery said.

Reid went behind the scenes to see for himself, with the help of senior aquarium biologist Bill Murphy. It turns out that calling an octopus curious is an understatement.

"Ahhh, she's more interested in you than the food!" said Murphy.

It was as if she wanted Reid to join her in her octopus' garden. "She is powerful," he said.

"Yeah, you feel the pull in the muscle?"

A big part of Murphy's job is keeping Rudy from getting bored. "Because they're so smart, we try and keep them mentally stimulated," he said. "And interactions like this help with that, 'cause they're figuring us out and who we are and what we're doing."

There are about 300 species of octopus, but the giant Pacific octopus is the largest, averaging 16 feet in length, and 110 pounds. It's also the longest-lived octopus; even so, its life span is only about three to five years.

"They have such personalities," Murphy said. "Each octopus is different. So, when you work this closely with them and you're interacting with them on a regular basis, you build a relationship with them."

"That's gotta be difficult that they live such short lives," said Reid.

"It is. It is. It's very difficult. But you enjoy the time you have."

To learn more, Reid headed down to Cape Cod where he met Bret Grasse of the Marine Biological Laboratory in Woods Hole, Massachusetts.  He's responsible for the care and feeding of the lab's octopuses, and stocks up on their favorite food: tiny grass shrimp.

Next stop: the beach for another octopus delicacy – crabs.

Back at the lab, the day was about to get a lot better for a small California two-spot octopus – and a lot worse for one of those crabs.

Of all the octopus' oddities, perhaps the most extraordinary is its talent for disguise. The octopus changes its shape, colors, patterns, even the texture of its skin, to look like seaweed, and does it in the blink of an eye. It's called dynamic camouflage.

"I would argue that dynamic camouflage is a form of intelligence," said Roger Hanlon, senior scientist and a top octopus researcher at the Marine Biological Laboratory, who recently gave a TED Talk on octopus intelligence that went viral:

Reid met him at the lab in Woods Hole, where he helped us understand what that means.

"It doesn't just happen instinctively; they actually think and decide how to camouflage themselves?" Reid asked.

"That's right. This is not a reflex; this is a decision-making process," Hanlon said. "They're taking into account the [surroundings] for camouflage, but also an approaching threat. And they're calculating all along about what they're going to do next."

As a scientist, Hanlon is skeptical about attributing human-like emotions to the octopus, or comparing their level of intelligence to ours.  But he says they are stunningly creative.

He said, "This is a complex animal. It's making decisions all the time. That takes a big brain."

A big brain in a unique and mysterious creature that scientists are only beginning to understand.

Taylor Swift fans, and Congress, take on Ticketmaster
Thanks for reading CBS NEWS.
Create your free account or log in
for more features.
View CBS News In
CBS News App Open
Chrome Safari Continue
Be the first to know
Get browser notifications for breaking news, live events, and exclusive reporting.