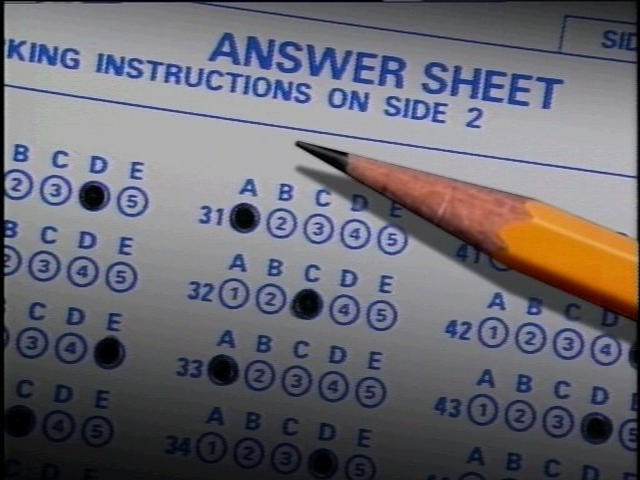 WASHINGTON -- Students, parents and teachers have long lamented the hours that kids spend taking standardized tests, especially since the introduction of the Common Core academic standards. But just how much time each year is it?

The correct answer is "B," according to a comprehensive study of 66 of the nation's big-city school districts by the Council of the Great City Schools. It said testing amounts to about 2.3 percent of classroom time for the average eighth-grader in public school. Between pre-K and 12th grade, students took about 112 mandatory standardized exams.

The study analyzed the time spent actually taking the tests, but it did not include the hours devoted to preparation ahead of the testing required by the federal government, states or local districts. It also did not include regular day-to-day classroom quizzes and tests in reading, math, science, foreign languages and more.

In connection with the study's release Saturday, President Barack Obama called for capping standardized testing at 2 percent of classroom time. Even while acknowledging that the government shares some responsibility for an over-emphasis on testing, the president said federal officials would work with states, schools and teachers to "make sure that we're not obsessing about testing."

The Obama administration still supports annual standardized tests as a necessary assessment tool, and both House and Senate versions of an update to the No Child Left Behind law would continue annual testing. But the rewrite legislation would let states decide how to use test results to determine what to do with struggling schools. Differences between the two bills still need to be worked out.

"Learning is about so much more than just filling in the right bubble," Obama said in a video released on Facebook. "So we're going to work with states, school districts, teachers, and parents to make sure that we're not obsessing about testing."

"How much constitutes too much time is really difficult to answer," said Michael Casserly, the council's executive director. He said the study found plenty of redundancy in required testing - supporting concerns from teachers and other critics about the tests consuming too much teaching and learning time.

For example, Casserly said that researchers found some states and school districts were mandating not only end-of-year tests, but end-of-course tests in the same subjects, in the same grade.

"Having states and school districts jointly reviewing redundancy and overlap in their testing requirements will be an important step in reducing unnecessary assessments," he said.

The council reviewed testing for more than 7 million students in about three dozen states during the 2014-2015 school year.

A "testing action plan" released by the Education Department over the weekend said too many schools have unnecessary testing.

The department pledged to work with states and schools on ways to reduce time spent on testing, with federal guidance to the states expected in January. The plan also said the agency has adjusted its policies to provide more flexibility to states on how much significance to place on student test results in evaluating teachers.

Aiming to close achievement gaps and assess learning, the No Child Left Behind Act signed by President George W. Bush in 2002 mandated annual testing in reading and math for students in grades three through eight and again in high school. States and local school districts decide which standardized assessments to use to gauge student learning and progress in those two subjects and others.

This past spring saw the rollout of new tests based on the Common Core college-ready academic standards in reading and math. About 12 million students in 29 states and the District of Columbia took the tests developed by two groups - the Smarter Balanced Assessment Consortium and the Partnership for Assessment of Readiness for College and Careers (PARCC).

Other findings in the council's report:

-The most tests were required in 8th and 10th grade; the fewest were in pre-K, kindergarten and first grade.

-Four in 10 districts report having to wait between two months and four months before getting state test results. The lack of timely results means teachers begin a new school year not knowing where a student needs to improve.