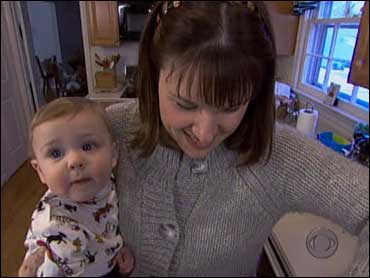 Making coffee together is a fun ritual for mom Jennifer Johnson and 10-month old James.

"I have to have it to wake up in the morning," Johnson says.

But Johnson cut out caffeine during her pregnancy with James - concerned it may have contributed to a previous miscarriage, report CBS News correspondent Thalia Assuras.

"You kind of wonder what did you do, if you did something wrong and you kind of look back and try and the next time do everything you can to be healthy," Johnson said.

There's long been a suspected link between miscarriage and caffeine consumption. But women suffering morning sickness often stop drinking it, so it was hard to make the connection. Researchers say a new study removes a lot of the doubt.

"It depends on how you brew your coffee and how your pour your cup but it really isn't a lot of caffeine," Dr. Tracey Flanagan of Kaiser Permanente said.

The study by Kaiser Permanente of 1,600 pregnant women shows that 2 or more cups of coffee daily - or 5 12-ounce cans of soda during pregnancy - doubles the risk of miscarriage.

Scientists believe caffeine may decrease blood flow through the placenta and harm the fetus, which also has difficulty metabolizing caffeine.

Dr. Flanagan, an obstetrician, has a clear prescription.

"I'm gonna be talking to my patients about seriously limiting the caffeine they take in during their pregnancy and consider taking it out entirely from what they drink and eat," Dr. Flanagan said.

Jennifer Johnson says will power was her solution but expectant mothers can find tasty decaffeinated drinks. And there's always exercise for that boost of energy.