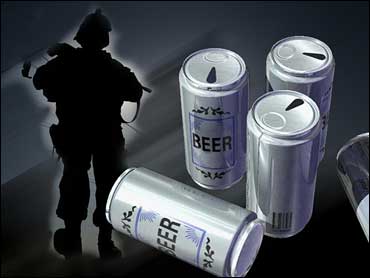 Researchers at the University of Minnesota say 43 percent of active-duty military personnel admit to frequent binge-drinking.

The figure is based on a 2005 survey of 16,037 active-duty military personnel by the Department of Defense.

Binge drinking (having 5 or more drinks in one sitting for men, or 4 or more drinks for women) is a common risk behavior among U.S. adults that is associated with many adverse health and social consequences.

Excessive consumption of alcohol (including binge drinking) is a leading cause of preventable death in the U.S.

However, little is known about binge drinking among active-duty military personnel (ADMP). The objectives of the study were to quantify episodes of binge drinking, to characterize ADMP who binge-drink, and to examine the relationship between binge drinking and related harms.

Heavy drinkers (19.8% of ADMP) reported 71.5% of the binge-drinking episodes and (compared to nonbinge drinkers) were more likely to report alcohol-related harms, including incidents relating to job performance, alcohol-impaired driving, and criminal justice problems.

The research, conducted by the Centers for Disease Control and Prevention (CDC), is published in the March issue of the American Journal of Preventive Medicine.