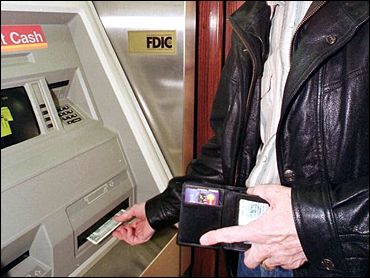 It's getting more expensive to use an ATM — particularly if it's the "wrong" one.

A new study by Bankrate says if an ATM cardholder uses a machine that's owned by a bank where the cardholder doesn't have an account, the customer will be hit twice for a single withdrawal.

That means cardholders pay both the "other" bank's ATM fee and the charged by their own bank, for a total average fee of $2.91.

According to Bankrate, American consumers will pay more than $4.3 billion in withdrawal fees in the current year for using the other guy's ATM.

So, according to Bankrate, consumers are finding that money sometimes comes out of their checking or ATM accounts faster than it goes in.

A Bankrate analyst said that making two withdrawals each week from another bank's ATM could cost you more than $300 a year.

That's because small, almost omnipresent charges add up. The average surcharge for a non-customer at a bank's ATM is $1.54. And, on top of that, the customer's own bank charges an average of $1.37. Both of these figures represent a new high for ATM fees, according to Bankrate.

Another money-maker for banks that can suck money out of a cardholder's account is high bounced-check fees. Although the average "insufficient-funds" fee fell a few cents this year, more banks are ramping up bounced-check fees for those who frequently overdraw their accounts, Bankrate found.

What's the remedy to high fees? Some banks say they pay back customers by offering interest-gathering checking accounts.

The catch: a customer must maintain a minimum balance — on average, $2,294 — in order to qualify. Although interest rates are up slightly, to an average of 0.31 percent from a record low of 0.27 percent two years ago, someone who maintains a balance of $2,300 for a year would generate barely more than $7 in an entire year.

Paying an ATM fee just three times in that year could negate any profit.