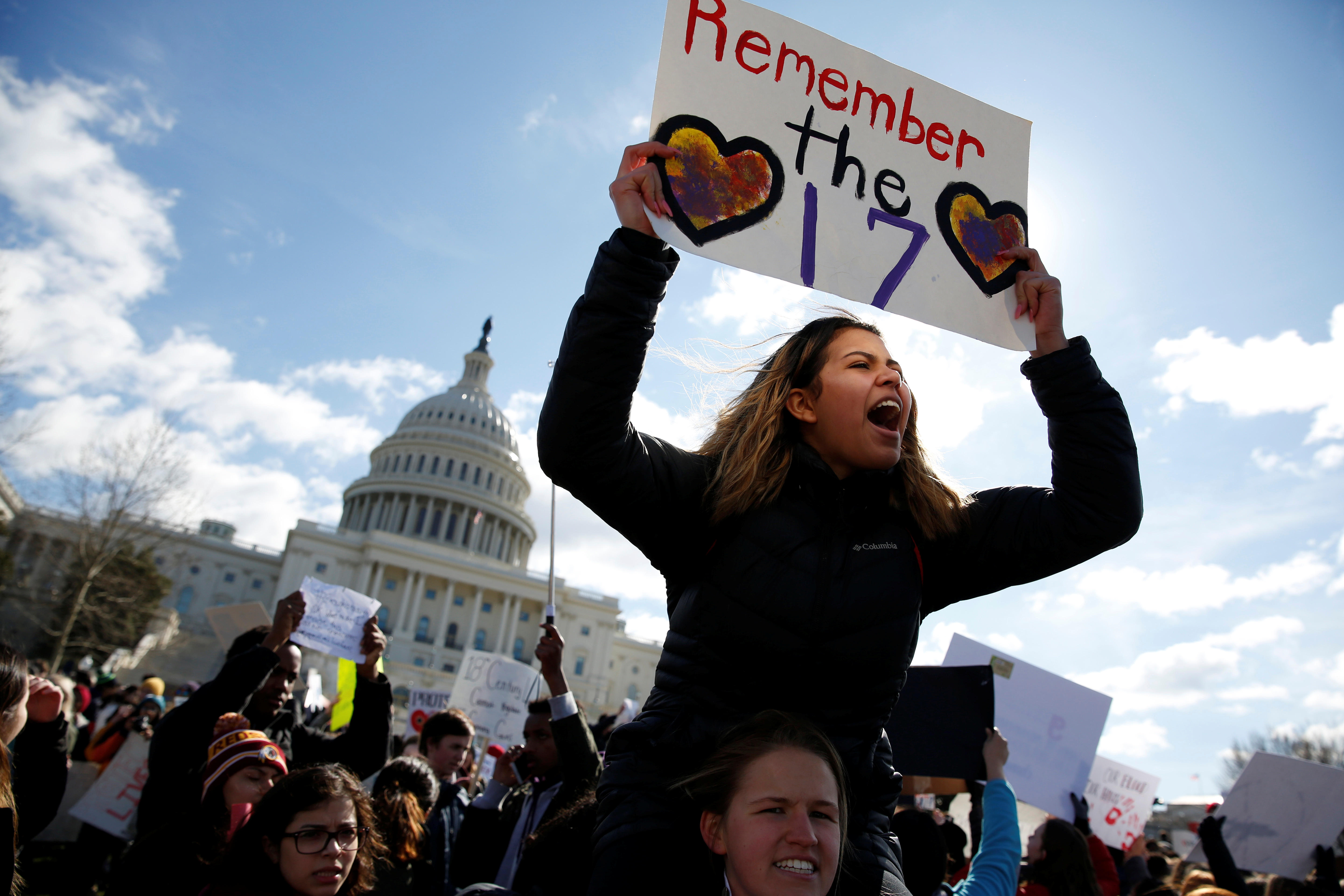 PARKLAND, Fla. -- High school students across the nation walked out to protest gun violence Wednesday, staying out of class for at least 17 minutes, one minute for each of the victims in the deadly shooting a month ago on Feb. 14. Students rallying at the U.S. Capitol were joined by House and Senate Democratic leaders who pledged to fight for new gun control laws.

The national walkout was inspired by the students of Marjory Stoneman Douglas High School.

A sea of students streamed out of the school while their parents like Rick and Rosemarie Jensen cheered them on.

"This wasn't the way I wanted my son to become an activist, but you know what? I'm so glad the kids have found their voices and I'm so glad it's what's buoying them, because this isn't easy for them," Rosemarie said.

Freshmen Alexa Palen and Brianna Jesionowski hugged each other near a memorial for their friend, 14-year-old Gina Montalto, who was killed in the Parkland shooting. They said the walkout helps them cope.

"It does help, because it shows the community is so strong and that we're coming through this together," Palen said.

But the father of 14-year-old victim Alaina Petty wants a different approach.

On Twitter, Ryan Petty encouraged students to "walk up to the kid who causes disturbances in class and ask how he's doing." He added the hashtag online: #WalkUpNotOut

Portland, Oregon, students who walked out had a clear message, forming a giant-sized peace symbol.

Even snow and frigid temperatures in Akron, Ohio, didn't stop the youngest students who were determined to show their support for Parkland victims.

In nearby Chicago, nearly 1,000 students left Jones College Prep, chanting, "This is what democracy looks like."

But they say the rest of America is now grappling with the gun violence they've battled for years.

"They don't live in cities where guns plague constantly, where children are dying in the streets whether they're coming to or from school," one student said.

"If you can speak, speak! If you can march, march! And when you can vote, vote!" one student shouted.

"This is a historic moment," Whitman said. "We saw this in the 60s and the 70s ... with MLK, with the Vietnam protests and we are seeing this here right now. This is a part of history."

While the walkout was underway, the National Rifle Association tweeted the following:

There were a few reports of disciplinary action taken against students in some parts of the country. At Stoneman Douglas, students were allowed to walk out, but if they did, they weren't allowed back in. The teenagers now have their sights set on a March 24 march on Washington.