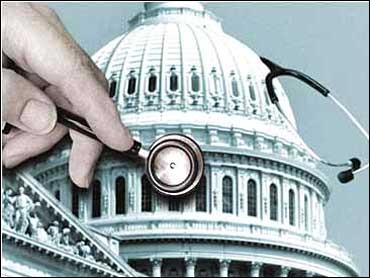 The White House and Democratic leaders are considering wrapping a student loan reform bill into the reconciliation "fix it" bill the Senate plans to pass for health care reform. At least nine senators, however, now oppose the plan, complicating Democrats' plans to finish health care reform as quickly as possible.

Additionally, Democrats could score a clear political victory by passing reforms that would help the thousands of students across the country who last week protested rising higher education costs.

Finally, Mr. Obama has made student loan reform a high priority, and it turns out the health care reconciliation bill may be Democrats' best opportunity to pass it this year: "Democrats can only move one reconciliation package through the Senate until the Congress passes a new budget resolution," the Hill reports. "That means if they do not twin student lending with healthcare reform, lawmakers will have to wait until later this year."

Those reasons are not good enough for a few senators, however. Six Democratic senators sent a letter to Senate Majority Leader Harry Reid this week stating support for student loan reform but saying, "we must proceed toward this objective in a thoughtful manner that considers potential alternative legislative proposals."

A few other senators have also expressed reservations about the plan, bringing the total to nine. Democrats would need at least 50 Senate votes (plus the vote of Vice President Joe Biden) to pass a reconciliation measure, meaning only only nine Democrats could defect. At least 50 senators have said they would agree to pass a health care reconciliation bill, and it seems unlikely Democrats would let student loan reform trip that up.

The House already last September passed the Student Aid and Fiscal Responsibility Act, which would, among other things, end the subsidized loan program that assists private lenders that give students government-backed loans. Putting the government in charge of all federal loans, rather than subsidizing private lenders to distribute them, would save taxpayers an estimated $67 billion, according to the Congressional Budget Office.

Yet a number of Democratic senators oppose the legislation because private lenders say it would result in as many as 35,000 lost jobs. Sallie Mae would cut an estimated 2,500 workers in Pennsylvania, Indiana, Delaware, Virginia, New York and Ohio, the Hill reports. The company has aggressively lobbied politicians on the issue, according to the Associated Press, and has held town hall meetings and petition drives in Pennsylvania, Florida, Delaware, New York and Indiana.

Democrats in favor of the bill say the industry is largely overstating any predicted job losses -- the bill would maintain a role for private lenders servicing jobs, they say.

"Lenders' claims about job losses have already been debunked as another scare tactic to save their sweetheart deal," Rachel Racusen, Democratic communications director for the House Education and Labor Committee told Hotsheet. "While this legislation will trim the profits of banks, it will not lead to enormous jobs losses."

Republicans oppose the president's student loan plan on the premise that the government should not have so much control over lending. With fewer than 60 senators supporting the measure, reconciliation appears to be the only way to get the reforms through the Senate.

The student loan issue has gained traction with progressive activists. The Web site FireDogLake this week launched a campaign to generate support for passing the student loan reforms via the health care reconciliation bill.

Colleges will have to wait, however, if Democratic leaders don't convince enough senators to accept the student loan language in the reconciliation bill.

"We're going to pass a bill," House Speaker Nancy Pelosi said Tuesday night with respect to health care. "We are way far down the road." The next step in health care reform, Pelosi said, is getting cost estimates from the CBO and deciding what stays in the reconciliation measure.

This story was corrected to note that the CBO's latest estimate for the 10-year savings that could be achieved from President Obama's student loan proposal stands at $67 billion. The CBO initially estimated $87 billion in savings but last week revised that figure.