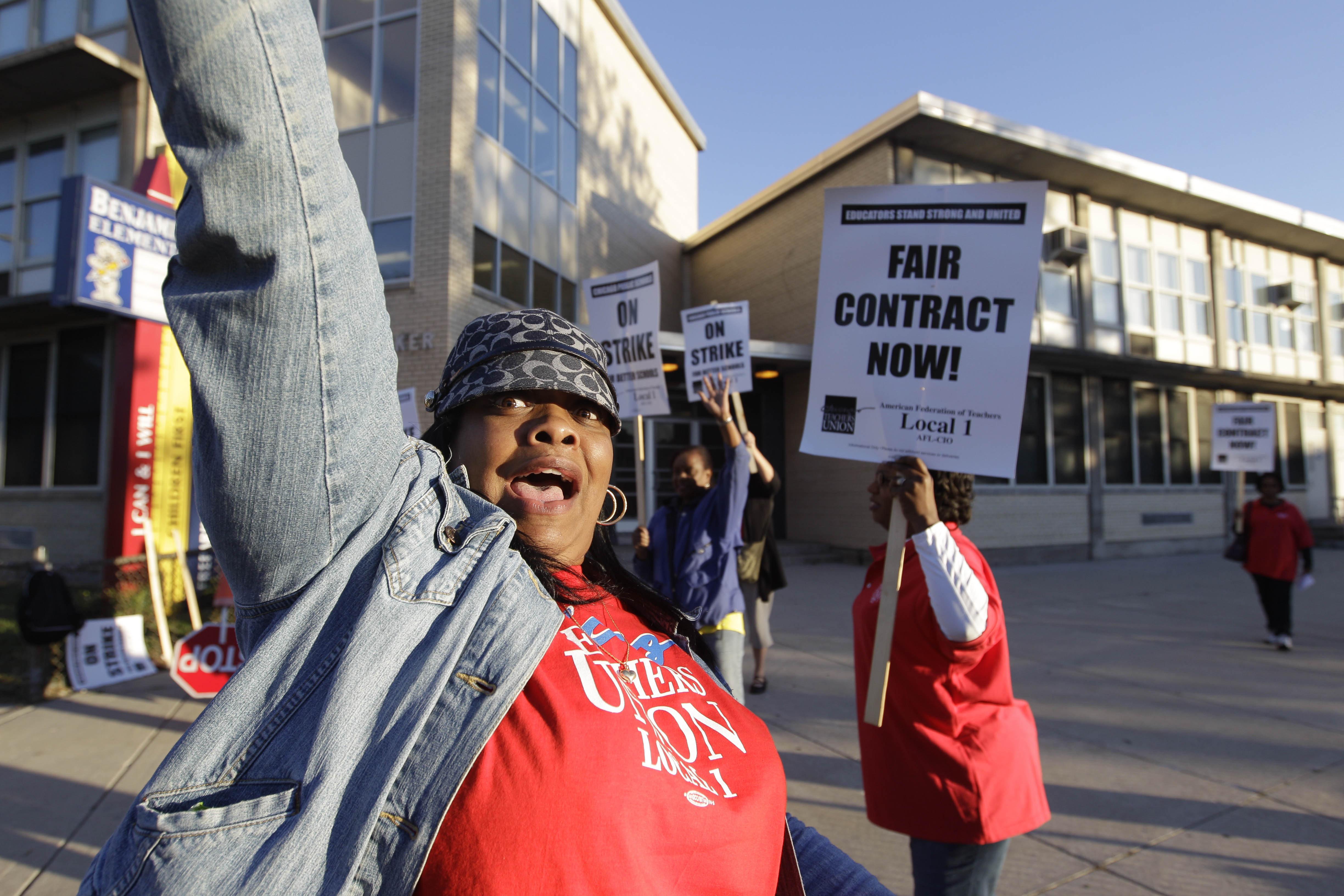 (CBS/AP) CHICAGO - Thousands of teachers, parents and supporters marched through downtown Chicago on the first day of a school strike.

The crowd Monday afternoon stretched for several blocks and was expected to swell through the early evening and into the city's rush hour. Some protesters carried signs that said "Chicago Teachers United" and "Fair Contract Now." Others waved red pom-poms and chanted. Earlier in the day, thousands of teachers picketed around neighborhood schools.

The city's 25,000 public school teachers are on strike for the first time in a quarter-century, after the latest contract talks broke down Sunday with no deal to avert a walkout.

Chicago Teachers Union President Karen Lewis said late Sunday night there had been some progress in contract talks, but "we have failed to reach an agreement that will prevent a labor strike."

The city's public school teachers make an average of $71,000 a year. Both sides said they were close to an agreement on wages. What apparently remains are issues involving teacher performance and accountability, which the union saw as a threat to job security.

Late Sunday, Mayor Rahm Emanuel, who has already forced teachers to lengthen their school days, said he was "disappointed" in the union's decision to continue with a strike.

On Monday, the mayor urged negotiators to come up with a new contract for the city's teachers quickly for the sake of the children.

Also expressing disappointment: Republican presidential candidate Mitt Romney, who released a statement in advance of a visit to Chicago for fundraisers. It said in part, "I am disappointed by the decision of the Chicago Teachers Union to turn its back on not only a city negotiating in good faith but also the hundreds of thousands of children relying on the city's public schools to provide them a safe place to receive a strong education."

Romney then accused President Obama of siding with the teachers union.

"There's only so much money in the system. There's only so many things that we can do that are available to us," Vitale said. "At this juncture, it is clearly their decision. ... We've done everything we can."

Lewis said the two sides were close to agreement on a contract, but not close enough.

"We are not far apart on compensation, however we are apart on benefits," Lewis said. "We want to maintain the existing health benefits."

Lewis said the union is also concerned that a proposed new teacher evaluation system "could result in almost 6,000 teachers - or nearly 30 percent of our membership - being discharged within one or two years. This is unacceptable and leads to instability for our students."

She said the new evaluation system would rely too much on students' standardized test scores.

"This is no way to measure teacher effectiveness at all," she said.

A dispute involving public sector employees in Chicago was somewhat surprising, said CBS News correspondent Dean Reynolds, given the generous packages unions here have won in the past. In addition, a teacher strike in the hometown of a president who stresses the importance of education could also be seen as something of a political embarrassment.

The union had set a midnight deadline for a walkout. Negotiations are to resume on Monday at 10 a.m. at a secret location.

Teachers began to walk picket lines at schools shortly before 6:30 a.m., and students and parents were left looking for alternatives.

Chicago Public Schools is opening about 140 schools for children from 8:30 a.m. to 12:30 pm.; however, no instruction will take place.

"They're going to lose learning time," said Beatriz Fierro, whose daughter is in the fifth grade on the city's Southwest Side. "And if the whole afternoon they're going to be free, it's bad. Of course you're worried."

In addition, churches, libraries and community organizations will be providing students with activities.

Before the strike, some parents said they would not drop their children at strange schools where they didn't know the other students or supervising adults. On Monday, as only a trickle of students arrived at some schools, April Logan said she wouldn't leave her daughter with an adult she didn't know. Her daughter, Ashanti, started school just a week earlier.

"I don't understand this, my baby just got into school," Logan said at Benjamin Mays Academy on the city's South Side before turning around and taking her daughter home.

Some students expressed anger, blaming the school district for interrupting their education.

"They're not hurting the teachers, they're hurting us," said Ta'Shara Edwards, a 16-year-old student at Robeson High School on the city's South Side. She said her mother made her come to class to do homework because so she "wouldn't suck up her light bill."

But there was anger toward teachers, as well.

"I think it's crazy. Why are they even going on strike?" asked Ebony Irvin, a 17-year-old student at Robeson.

Police Superintendent Garry McCarthy said the police department is also putting more officers on the street to deal with potential protests, and children who might not be in school.

When he took office last year, Mayor Emanuel inherited a school district facing a $700 million budget shortfall. Not long after, his administration rescinded 4 percent raises for teachers. He then asked the union to reopen its contract and accept 2 percent pay raises in exchange for lengthening the school day for students by 90 minutes. The union refused.

Emanuel, who promised a longer school day during his campaign, then attempted to go around the union by asking teachers at individual schools to waive the contract and add 90 minutes to the day. He halted the effort after being challenged by the union before the Illinois Educational Labor Relations Board.

Emanuel and the union officials have much at stake. Unions and collective bargaining by public employees have recently come under criticism in many parts of the country, and all sides are closely monitoring who might emerge with the upper hand in the Chicago dispute.

The timing also may be inopportune for Emanuel, whose city administration is wrestling with a spike in murders and shootings in some city neighborhoods and who just agreed to take a larger role in fundraising for President Obama's re-election campaign.