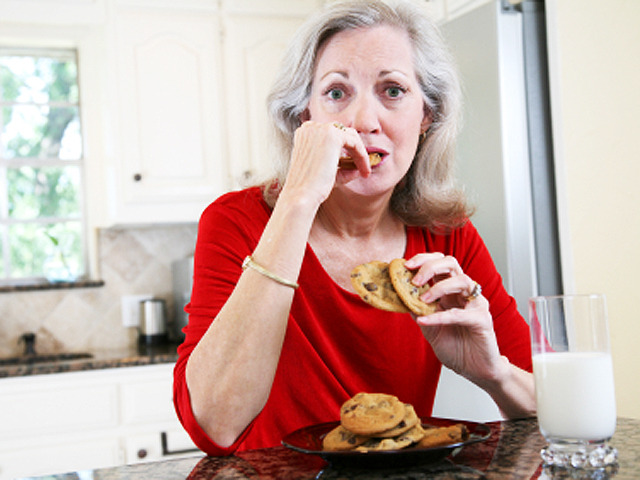 Plenty of research shows that stress makes people more likely to consume high-fat and high-calorie comfort foods, which invariably leads to weight gain. However, a new study suggests that not only does stress prompt eating; eating after feeling stressed may lower your metabolism and make you more likely to gain weight -- as much as 11 pounds a year for some women, say the researchers.

The study, conducted at Ohio State's Clinical Research Center and published today in the journal Biological Psychiatry, found women who experienced one or more stressful events the day before eating a carbohydrate- and fat-filled meal actually metabolized the food less effectively.

For the randomized trial -- partially funded by the National Cancer Institute -- the researchers asked 58 women about stressful events that had occurred the day before. The women, whose average age was 53, were most likely to report interpersonal relationship challenges or trouble at work.

After being interviewed the women ate a meal that consisted of eggs, turkey sausage, biscuits and gravy -- a total of 930 calories and 60 grams of fat. The researchers said it was the nutritional equivalent of a fast-food two-patty hamburger with a side of French fries

To regulate their food intake prior to the study, researchers instructed the women to fast for 12 hours and provided all study participants with the same three meals before that.

After the women finished the meal, the researchers measured their metabolic rates, blood sugar, triglycerides, insulin and cortisol levels. They found women who reported at least one or more significant stressors the day before burned 104 fewer calories than women who did not report a prior stressful event.

The researchers also duplicated this process with a meal that contained sunflower oil, a monosaturated fat which is considered a heart-healthy fat, and found the stressed-out women metabolized both types of food the same way.

Overall , the stressed women had higher levels of insulin, which can cause the body to store more fat. Additionally, these women had less fat oxidation, the process of converting large fat molecules to smaller ones that are used to fuel the body.

The researchers also observed that a history of depression, along with recent stressors, caused a much more immediate rise in triglyceride levels after the meal.

A large body of research links weight gain to common everyday challenges at work or to stressful relationships with family and friends. This is commonly blamed on what's often called emotional eating. But today's study suggests that stress actually impedes the body's ability to efficiently process and metabolize food.

People in stressful situations also tend to feel more hungry and reach for foods that are most readily available, which tend to be junk food. This is why it's important to have healthful snacks and meals on hand, say the researchers.

Other research has found that people crave foods such as sugar and carbohydrates when they're experiencing increased amounts of pressure. As they say, "desserts" is "stressed" spelled backwards.