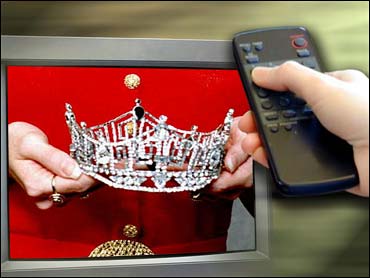 
I have been trying to catch up on the news since I came back from vacation, and I'll tell you one thing: these critics are right. You can't believe anything you read in the paper or see on TV anymore.

I mean, I just read that the Miss America contest is leaving Atlantic City — bad TV ratings. Well, maybe that could be true. Miss America celebrated winners, and those TV reality shows that get the big ratings always humiliate losers.

Even so, moving Miss America out of Atlantic City is like saying the Alamo is moving out of Texas. That's as far fetched as those stories that the Rev. Pat Robertson wanted to assassinate the leader of Venezuela because it's cheaper than fighting a war, or that Israeli Prime Minister Ariel Sharon, who led the drive to settle Israelis in the occupied Palestinian territories, has just led a drive to move the Israelis out.

Actually, I hope that one is true. But this next one can't be right: portraits of Alan Greenspan are the art world's new bestsellers? A young artist named Erin Crowe put 18 of her impressionist paintings of the Fed chairman in a show in Sag Harbor, Maine, and they sold out in a Wall Street minute. Some of them are bringing as much as $10,000 each.

Alan is a handsome devil but, still, I wonder about it.

And then there's the story that Jennifer Connelly, the actress in those scary movies, told a reporter. She said she likes to shop online while having sex.

I think she's kidding, but a guy my age is convinced he knew her mother.

Maybe so, but I still don't trust the media.