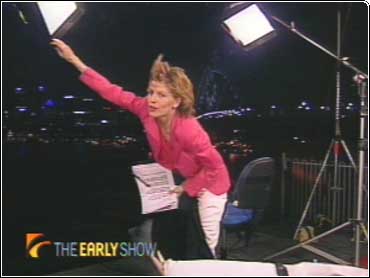 A CBS co-anchor and crew in Sydney, Australia were more than ruffled Thursday morning by strong gusts of wind that nearly knocked over their outdoor stage.

The crew had set up their tent on the fifth floor of a boy's school overlooking the Australian capital's harbor, where the network plans to cover the city's grand millennium celebrations.

Clutching her scripts in one hand, Clayson took hold of a suspended light that threatened to fall, while crew members ran to support light stands and tent poles.

"Hey, guys, we might as well do business," a laughing Gumbel told producers. "Don, Steve, do we have that on tape? We can turn that around and roll it in the opening. It's good stuff."

Don Roy King is the veteran director of The Early Show and its predecessors. Steve Friedman is Senior Executive Producer of the show.

"The rain now is gusting in. This is a big storm," Clayson said, squinting, but laughing. "Â…Yikes - there goes my hair."

Clayson appeared later in the show wearing a raincoat, her hair still styled by an unforgiving, wet "southerly guster."