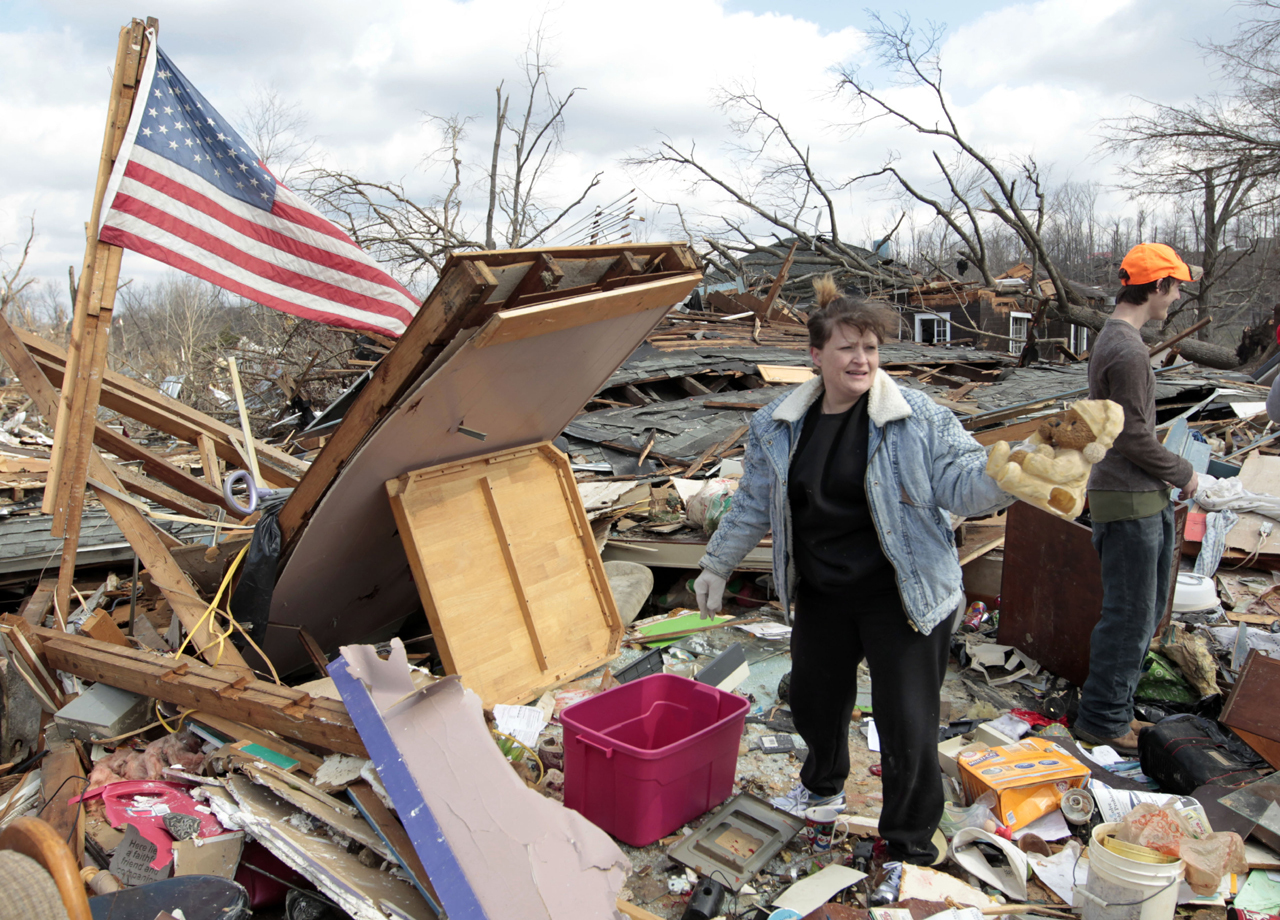 (AP) EAST BERNSTADT, Ky. - The stories from tornado survivors across the South and Midwest were remarkable: schoolchildren took cover under desks, people hunkered down in a church basement or hid out in a bank vault. One family even piled on top of one another for protection.

At least 38 people were killed by tornadoes that scarred communities scattered across hundreds of miles of the nation's midsection from Alabama to Indiana.

In Kentucky farming country, people remembered friends and family members who were killed in the most powerful storms to hit the eastern part of the state in nearly a quarter-century. Tracy Pitman said she was at home with her husband and 4-year-old grandson when a tornado with winds of up to 130 mph hit.

"I grabbed my baby and I said, `Baby, lay down' and I got on top of him and my husband got on top of me and it was already happening, just flipping us over and over and over," said Pitman, of East Bernstadt, Ky., a small town 70 miles south of Lexington.

The worst damage appeared centered in some hard-hit small towns of southern Indiana and eastern Kentucky's Appalachian foothills. No building was untouched and few were recognizable in West Liberty, Ky., about 90 miles from Lexington, where two white police cruisers were picked up and tossed into City Hall.

"We stood in the parking lot and watched it coming," said David Ison, who raced into a bank vault with nine others to seek safety. "By the time it hit, it was like a whiteout."

The spate of storms was the second in little more than 48 hours, after an earlier round killed 13 people in the Midwest and South. They were the latest in a string of severe-weather episodes that have ravaged the heartland in the past year.

Friday's violent storms touched down in at least a dozen states, killing 20 people in Kentucky, 12 in Indiana, three in Ohio, and one each in Alabama and Georgia. Indiana police had earlier reported a higher number of deaths but lowered it by two in a revision on Sunday.

The National Weather Service said the four twisters to hit Kentucky were the worst in the region in 24 years. In Indiana, an EF-4 tornado — the second-highest on the Fujita scale that measures tornadic force — packing 175 mph winds hit the town of Henryville, and stayed on the ground for more than 50 miles. Three tornadoes in Kentucky had wind speeds up to 160 mph.

The storms left behind a trail of shredded sheet metal, insulation, gutted churches and crunched-up cars.

The trailer that was once the home of Viva Johnson's mother was sitting in a graveyard on Saturday, covering the dead alongside downed trees and other debris. "You can't even tell where the headstones are," said Johnson, who lives in Pulaski County, Ky.

A twister demolished Henryville, Ind., the birthplace of Kentucky Fried Chicken founder "Colonel" Harland Sanders. The second story of the elementary school was torn away, one of the city's three schools lost to the weather. The winds also blew out the windows and gutted the Henryville Community Presbyterian Church.

A school secretary said a bus left the city's high school Friday afternoon with 11 children, but the driver turned back after realizing they were driving straight into the storm. The children hid under tables and desks at the school nurse's station when the tornado hit; none were hurt, but the building is a total loss.

The school bus was tossed several hundred yards into the side of a nearby restaurant. Todd and Julie Money were hiding there, having fled their Scottsburg home because it has no basement.

"Unreal. The pressure on your body, your ears pop, trees snap," Todd Money said. "When that bus hit the building, we thought it exploded."

The storms also hit to the east in Ohio, where the Ohio River town of Moscow was so decimated that rugs hung from the trees.

In Kentucky, the Rev. Kenneth Jett of the West Liberty United Methodist Church was huddling with four others in the basement as the church collapsed.

The pastor and his wife had just returned to the parsonage when he turned on the TV and saw that the storm coming. Jett yelled to his wife to take shelter in the basement of the church next door, where they were joined by two congregants and a neighbor.

The last one down was Jett's wife, Jeanene.

"I just heard this terrific noise," she said. "The windows were blowing out as I came down the stairs."

They only had some bumps and bruises, able to escape the rubble through a basement door.

Friday's tornado outbreak had been forecast for days; meteorologists at the National Weather Service's Storm Prediction Center had said the day would be one of a handful this year that warranted its highest risk level. The weather service issued 297 tornado warnings and 388 severe thunderstorm warnings from Friday through early Saturday.

In Harvest, Ala., which was hit last April, Cody Stewart said he was done owning a home for the time being after his house was damaged a second time. In his house for less than two months with repairs still incomplete, a tornado on Friday ripped the roof away and slung it into the backyard. This time, the damage is beyond repair.

"I think I'm going to live in an apartment awhile. I'm not superstitious, but it just kind of seems there's a path here and I don't want to be in it again, and I hope other people make the same choice," Stewart said.