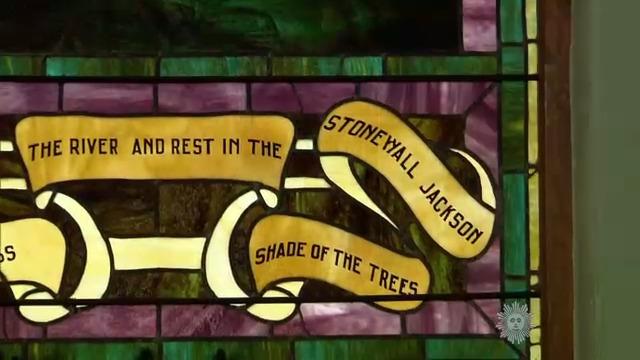 ROANOKE, Va. -- General Thomas "Stonewall" Jackson was one of the best-known commanders of the Confederate Army, and a Virginian.

So, it's not a big surprise that he's memorialized in a stained glass window at Roanoke's Fifth Avenue Presbyterian Church.

That is, until you meet its congregation.

The Stonewall Jackson window has been part of this black church for 125 years, surviving a fire in 1959 that took the rest of the church with it, CBS News correspondent Mo Rocca reports.

But third-generation member Joyce Bolden says the window is not about General Jackson, but Jackson, the man, who before the war led a bible study for his slaves -- including the parents of an early pastor. "This was a monument to the future of the African American race."

"I believe it's being memorialized. Stonewall Jackson was as a human being and as a man of Christ, of faith. He defied all the laws of the South by educating his slaves. He taught them to read and write."

"The man fought for slavery," Vernie said. "That is the man. Can we separate the man from his military work?"

The conversation over the window continues. But across the country, a legion of Confederate monuments have fallen, some after the 2015 Charleston massacre of nine black churchgoers by a white supremacist. Then, many more after white supremacists used the proposed removal of a Robert E. Lee statue in Charlottesville, Virginia, as pretext for a rally that shocked the nation.

"We're having, once again, for whatever it is, the 17th time, a major racial reckoning in America," Yale Civil War historian David Blight said. "And we don't know exactly where this one's going."

According to Blight, most early Confederate monuments were part of an effort to recast the secessionist cause as a noble one -- one that supposedly had little to do with maintaining slavery.

"A sole monument to a Confederate soldier or to his unit is not necessarily a monument to white supremacy," Blight said. "However, the broader process of Confederate memorialization has everything to do with creating a white supremacist society. There's just no doubt about that when you go back and look at the period and look at the relationship between not just monuments but the whole memorialization process of the Confederacy."

The first major Confederate monument of Stonewall Jackson was unveiled in Richmond in 1875.

"[An] estimated 50,000 people attended this thing, lots of speeches," Blight said. "Blacks were only allowed to participate in this at the very back of the line. But it was a big coming out. It was the first time Confederate flags were used on any scale."

Even so, Blight doesn't support the wholesale removal of Confederate monuments.

"I want to make it clear," Blight said. "I am for removal of some Confederate monuments. The time has come. Not all of them, not every single one of them, certainly not in cemeteries. I just want the process to be historical, deliberative and based on research."

A memorial landscape-turned-minefield is familiar terrain for Blight and Yale University.

"There was resistance to name changing among alumni, among some faculty staff," he said.

Earlier this year, the university renamed a dormitory dedicated to former Vice President John C. Calhoun, citing what it called Calhoun's "primary legacy" as one of the 19th century's most ardent defenders of slavery. But determining a historical figure's "primary legacy" is where things can get especially tricky.

Yale itself is named for a slave trader. So where is it appropriate to draw the line? Some warn against drawing lines at all.

"We need to remember this nation exists by the blood and the sacrifice and the courage of many, many men," Virginia Tech history professor emeritus James Robertson said. "Many guided correctly, many misguided."

"We need to learn from the mistakes others made, just as well as we need to be inspired by the good things that good people have done," Robertson said.

And he believes there was a lot of good in Confederate Gen. Robert E. Lee.

"He is the most unobjectionable of all Confederate leaders," Robertson said. "But people forget that after the Civil War, Lee became the greatest voice for reconciliation in this country. He preached peace and harmony."

Robertson joined Rocca on Richmond's Monument Avenue -- a grand boulevard in the once Confederate capital, which is designed to pay tribute to the rebel leaders.

"My regret is that Lee is not in civilian clothing, which he would have been in his last five years," Robertson told Rocca.

Half a mile from Lee is the Jefferson Davis monument, a tribute as much to the former Confederate president as it is to the secessionist government.

"So Davis leads the south into a war for its independence, very much aware that he was fighting to keep slavery legal," Robertson said. "And so, if one has to go, this is probably the one to go."

"There's plenty of room for monuments here," he said. "Monuments commemorating other aspects of the war; Harriet Tubman, Frederick Douglass."

But that wouldn't lessen the denigration Bryan Stevenson -- founder of the Equal Justice initiative in Montgomery, Alabama -- felt seeing these monuments as a kid growing up in Delaware.

"I always thought, despite the fact that they were copper or bronze, that they were screaming at me," Stevenson said. "They were saying I don't belong here. 'This is not your land, you are still subordinate.'"

Stevenson is turning a light on one of America's darkest post-Civil war chapters -- the thousands of lynchings that happened in the old south between 1877 and 1950.

"We are looking at jars of soil that have been collected from the sites of lynchings that took place in the state of Alabama," Stevenson said.

Each jar bears a victim's name, 363 in Alabama alone.

"There's even photography where you'll see thousands of people gathered in a space while someone is being burned alive, or someone is being hanged," Stevenson said. "People would come to these lynchings and they would drink lemonade and whiskey and deviled eggs. That was the menu of the day."

Now, these jars will be part of a museum that Stevenson is opening, along with a national memorial to victims of lynching next year in Montgomery.

"I do think that we need to increase the shame quotient in America," Stevenson said. "I don't think shame is a bad thing. I think it actually moves you and pushes you to think differently about things. And I don't frankly think we've expressed our shame about slavery. And I want us to talk about what it means to honor someone who did something dishonorable."

Which brings us back to Roanoke and the Stonewall Jackson window that survived that fire so many years ago. Bolden doesn't expect others to see it as she does. She knows it may not be long for this world.

"So when I die off, and there's no memory of the origins of this window, it probably will be removed," Bolden said.

Until that day, she sees that window not as a tribute to the Confederacy, but as a connection to her own past and a church she loves.