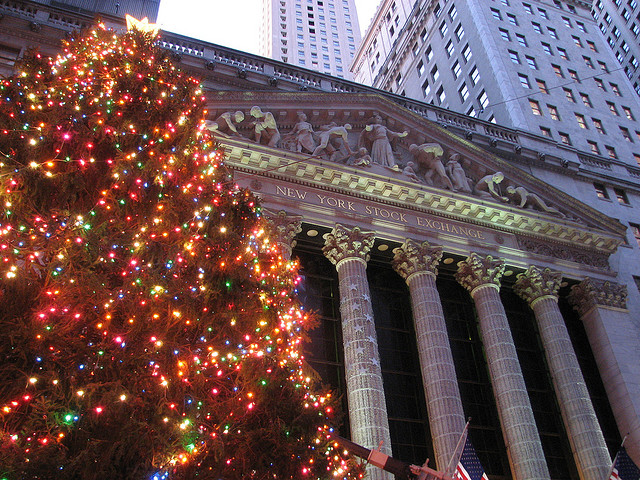 Despite wicked volatility and essentially flat returns, 2011 has been a textbook year for investors -- but only if the textbook is the Stock Trader's Almanac.

That's because pretty much every old saw of conventional investing wisdom has held true this year, writes Jeffrey Kleintop, chief market strategist at LPL Financial. Fortunately, it might also mean stocks are ready for a so-called Santa Claus rally, which would propel the market to finish the year with solid gains.

"All of the time-worn stock market trading axioms based on the calendar actually were worth following this year, including the 'January effect,' 'sell in May and go away' and October the 'bear killer' month," Kleintop says in his weekly note to clients.

"This textbook pattern of calendar-driven performance by the stock market may mean that the best year-end strategy is to invest by the book as a 'Santa Claus rally' unfolds in December," Kleintop adds.

True, markets will have to run a gauntlet of uncertainty in the weeks ahead, Kleintop writes, including new governments in Italy, Spain and Greece, action by Congress to avoid a government shutdown and Super Committee gridlock over finding $1.5 trillion in deficit reduction measures.

And yet despite an extraordinary year of recession fears and sovereign debt worries, the market has followed an uncannily predictable script. Kleintop points to four major trading cliches that have come to pass in 2011:

The "January effect" (the market tends to rise in January attributed to individual investors putting money to work after taking tax losses in December) worked this year as the S&P 500 posted a 2.3 percent gain in January.

"Sell in May and go away" (suggests investors sell and avoid the summer months) worked with stocks peaking for the year on April 29.

October, the "bear killer" month (stock market downturns famously end and reverse in the month of October), ended the 19 percent peak-to-trough stock market decline with stocks bottoming for the year on Oct. 3.

Historically, at least, there really is something to the Santa Claus rally, also known as the Thanksgiving effect, according to J.P. Morgan Chase analyst Marco Dion.

"Indices around the world generate positive returns during this end of year rally with incredible consistency through history," Dion writes in a recent note to clients.

Indeed, after crunching decades of data, Dion found that the Dow Jones Industrial Average returned an average of 1.9 percent from Thanksgiving through to New Year's Eve. Furthermore, the blue-chip index posted gains during the holiday season 79 percent of the time, with a record return of 12.4 percent one year. (The worst year without a Santa Claus rally saw the Dow tumble 17.3 percent.)

The broader S&P 500 and major foreign indexes in Europe and Asia generated even stronger holiday returns than the Dow the great majority of years. MSCI Europe, for example, had an up holiday trading season 80 percent percent of the time, good for an average gain 3 percent. (See the table above.)

Even more promising is that when the Dow is positive for the year heading into Thanksgiving, it's gone on to generate an average return of 3.4 percent through Dec. 31, Dion says. The blue-chip index is currently up about 2 percent for 2011.

If the Dow can hold that gain until Thanksgiving, the historical record and a year of cliched trading suggest a Santa Claus rally will let the market finish 2011 with single-digit percent positive returns or more. Although stocks have been awfully naughty lately, the odds look good they'll give investors something nice for the holidays this year.

Explainer: Why is deflation so harmful?
Dan Burrows