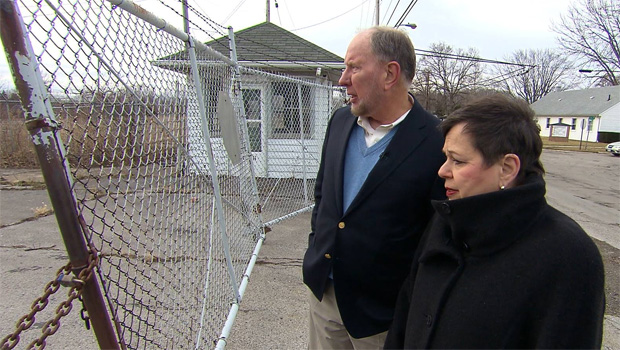 Are all our nation's families still LIVING THE DREAM? The American Dream, that is, long considered our birthright. A question for our Labor Day Weekend Cover Story reported by Martha Teichner:

The '50s and '60s were good years to celebrate in Port Clinton, Ohio -- prosperous years for the little town on the edge of Lake Erie. Port Clinton's population: 6,000 or so. The local auto parts factory alone employed nearly a thousand.

Even without much education, there were well-paid, blue-collar jobs to be had in 1959, when Robert Putnam graduated from Port Clinton High School, valedictorian of his class.

Putnam, now a professor at Harvard, said there was a sense that you were living the American Dream. "That was a Golden Age for the American middle class," he said.

For Putnam, the American Dream -- which he says means opportunity for all -- is in trouble.

Port Clinton, his own hometown, he sees as proof. The auto parts factory and all of those jobs are gone.

"This is a Rust Belt case," he said. "In the Rust Belt, of course, manufacturing disappeared, and that undermined the social fabric and the opportunity for kids. But you can find the same thing all over the country, even places that don't have Rust Belt stories."

He said, "You can't have the American Dream if there's not a good, solid economic base for the middle class."

A glance at incomes tells the story. Since 1979, a 200% rise for the top one percenters; the gap with everybody else widening, especially for middle income households earning between $42,000 and $82,000.

In his recent book, "Our Kids: The American Dream in Crisis" (published by CBS-owned Simon & Schuster), Putnam argues that this widening income gap has led to a widening and dangerous "opportunity gap" based on social class -- children's futures dictated by their parents' affluence and education.

In the middle of Port Clinton, Adrienne Hines smiles down from a billboard advertising her services as a bankruptcy lawyer.

"When I see clients who have so very little, how do they even contemplate the American Dream?" she asked.

Her husband, Scott, is a judge who settles workmen's compensation disputes.

"The scary part is, we realize a few bad choices and we could have been them," he said.

Which has shaped their definition of the American Dream.

"I think it really comes down to security," she said. "And for us, I think that's what the American Dream is, knowing you are eliminating the worry factor from your life."

They live well, but not lavishly, on the outskirts of Port Clinton. Their 13-year-old twins, Zoe and Avery, take piano lessons. They have family dinners together. When they talk, education is a common theme. The twins have been taken to college campuses, art museums, and to Europe (twice).

When asked if they feel they are living the American Dream, Adrienne replied, "I do."

But according to a December 2014 New York Times poll, the number of Americans who still believe in the American Dream is slipping. It was 72 percent in early 2009, at the worst of the financial crisis, and 64 percent this past December, in spite of the improved economy.

Chris Lawson, from a not-so-nice part of Port Clinton, Ohio, did not grow up living anybody's version of the American Dream.

"My mom wasn't around too much when I was little," he told Teichner, "so I was mostly in my dad's custody. But he was always running around, so I was raised by my grandmother. My dad was a little nuts, so he's locked up right now. He's in prison."

Lawson's childhood was chaotic, just graduating from high school, a slog. "I didn't have many friends in school, 'cause I was kind of an outcast."

During summer months he does landscaping work, but would like a steadier job.

In his early 20s, Lawson is not someone you'd expect to be a big believer in dreams. But he is, or has been ever since his three-year-old daughter, Camille, was born. He shares custody with Camille's mother.

Teichner asked, "Is she your American Dream?"

"You just look so happy."

The flip side of the news that faith in the American Dream has slipped to 64 percent, is that 64 percent -- nearly two-thirds of Americans -- still DO believe in an idea that is often about much more than making money.

For immigrants, such as Hussain Tasawar, it can still be a beacon of hope. Everybody, he said, has a dream when they come to America "about freedom and nice living."

A banker in Pakistan, Tasawar left because it was dangerous for anyone who opposed the party in power. He walked to Afghanistan at night to escape. His family now lives in New Jersey. He drives a taxi. Tasawar, all his children and grandchildren are proud American citizens.

Teichner asked, "You think coming to America gave you the opportunity you were hoping for?"

Yes, he said. "If you are hard worker, you can get everything here."

"She will go to the university and she can get opportunity, if she is intelligent," Tasawar said.

"You don't think of it on a day-to-day basis that, 'Wow, my father struggled so much, and now he's here,'" said Saba. "You kind of just use what you have. But when you think back, I think it's a very respectful and honorable thing."

And if you happen to run across Hussain Tasawar's taxi, take a look at the name of the company he works for: yes, the American Dream Car & Limousine Service.