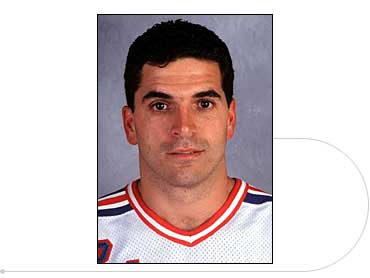 One day after trading for 6-foot-8 forward Steve McKenna, they also added more size and toughness by obtaining forward Kryzysztof Oliwa from the Columbus Blue Jackets for a third-round draft pick.

To get Stevens, the Penguins traded defenseman John Slaney, who had 12 goals and 37 assists in 49 games for the Penguins' Wilkes-Barre Scranton farm club.

Slegr, whose playing time has dropped significantly, was dealt for a third-round pick. Slegr has five goals and 10 assists in 15 games, but was a minus-6 in his five most recent appearances.

Stevens, a linemate of Penguins owner-player Mario Lemieux on Stanley Cup-winning teams in 1991 and 1992, was playing little in Philadelphia and had only two goals in 23 games. He also was arrested in a much-publicized drug case last season.

"I think in the right situation, he can be very helpful to this organization," Lemieux said after practice Sunday. "He was great when he was here. A fresh start may be what he needs right now."

The 35-year-old Stevens hasn't played since Jan. 2 and did not appear in eight of the Flyers' last 10 games. He is still being monitored under the NHL's substance-abuse and behavioral-health program.

"I told him Pittsburgh was interested in him and he was excited," Flyers general manager Bobby Clarke said Saturday. "It just didn't work out for Kevin here. He's a really good person. He never caused us any trouble, never complained about not playing."

By landing McKenna and Oliwa, general manager Craig Patrick acquired the size he has sought since Lemieux returned.

"It's going to help us," Jaromir Jagr said. "The players that are coming here are the players we needed. It's the mix you need to have on a team. Kevin is a good guy and a good leader."

The 6-foot-5 Oliwa is renowned as one of the NHL's toughest fighters, but he also had six goals and 10 assists in 69 games for Stanley Cup champion New Jersey last season. He had no goals in 10 games with Columbus.

Stevens figured prominently in the Penguins' first Stanley Cup run in 1991, predicting they wuld beat Boston even after they fell behind 2-0 in the Wales Conference finals. The Penguins rallied to win the next four games, then beat Minnesota in six games in the Cup finals.

Once the NHL's premier power forward, Stevens scored 40 or more goals for the Penguins for four consecutive seasons from 1990-94. But his production dropped off significantly after his face was badly injured as he slammed into the ice during a 1993 playoff game with the Islanders.

At Lemieux's urging, Patrick was on the verge of reacquiring Stevens last season when the three-time All-Star was arrested Jan. 23, 2000, at a motel in Collinsville, a St. Louis suburb in Illinois, along with two other men and a woman described by police as a prostitute.

The woman told police she spent a night smoking crack cocaine with Stevens, then with the Rangers. His arrest came hours after the Rangers played the St. Louis Blues.

Under a deal approved in December in an Edwardsville, Ill., court, Stevens must complete up to 18 months of drug tests and court appearances and attend recovery meetings to have the felony drug charge dropped.

Last month, the Bucks County (Pa.) Courier Times reported that Stevens had an apparent setback in his rehabilitation program, telling a Flyers official he went drinking in Colorado on Dec. 13.

Stevens signed with the Flyers last summer for $600,000 after rejecting an offer from the Penguins.