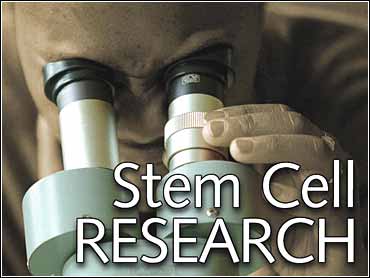 That spare tire around your waist could have some positive uses after all.

Researchers at UCLA and the University of Pittsburgh have isolated stem cells from fat sucked out of liposuction patients, a breakthrough that could lead to cures for a variety of illnesses.

Stem cells are those cells that haven't been "switched on" yet and have the potential to become almost any kind of tissue, reports CBS News Correspondent Vince Gonzales. Dr. Marc Hedrick, the lead scientist on the project, found that human fat was full of them.

The finding could allow for a more plentiful supply of the cells, paving the way for more medical research. Until now, there has been a scarcity of human stem cells for testing due to the medical and ethical controversy surrounding collection methods.

"Fat is perhaps the ideal source," said Dr. Hedrick. "There's plenty of it. It's easy and inexpensive to obtain. It even has a secondary cosmetic benefit. These cells already have the genetic information to become fat cells or bone cells or muscle cells or cartilage cells. The information's there."

"We don't yet know the limits for stem cells found in fat. So far, we have seen promising results with all of the tissue types we have examined," said Dr. Adam J. Katz, a member of the research team from the University of Pittsburgh School of Medicine. "This discovery could potentially obviate the need for using fetal tissue," a practice opposed by many.

Researchers say that stem cells have the potential to grow new heart muscles for people with cardiac disease and generate new nerve tissue for those with Parkinson's and Alzheimer's diseases. There is even hope for those suffering from spinal cord injuries.

"We hope one day to be able to remove diseased tissue or organs, harvest stem cells and replace the lost tissues on the same day during the same operation," said Hedrick. "There is potential for regenerating a lot of different tissues, perhaps some day solid organs, glands, nerves or brain tissue."

Fat is not the only potential source of adult stem cells. Dr. Ira Black of the Robert Wood Johnson Medical School took stem cells from bone marrow and turned them into nerve cells — a possible therapy for spinal injuries and neurological diseases like Alzheimers. "The ultimate goal is to determine if these cells will be useful to replace damaged and dying cells in these diseases and hasten recovery of function."

Encouraging as the latest results with adult stem cells are, some researchers believe they will never match the healing potential of the other, controversial, source of stem cells — fetal tissue.

The study, published in the April issue of Tissue Engineering, had researchers take the fat and fluid drained from the hips, buttock and stomachs of liposuction patients.

The material was then washed, purified and treated with an enzyme to break down the matrix holding he cells together and compared to stem cells from bone marrow.

Scientists found that a half-pound of the fatty substance yielded as many as 50 million to 100 million undifferentiated stem-like cells.

Experiments were underway to see if the cells could be used to grow human bone and fat tissue in mice.

But with fetal tissue drawing fire and with an estimated thirteen thousand liposuctions done every week in this country, the fat Americans love to complain about may be a stem cell researcher's best hope.